Preseason Studs: Which Hyped-up Guys are Worth the Premium? Which are Not?

With 3 weeks of the preseason behind us, we asked 3 of our Featured Pros to give us their take on what to make of the guys that have seen their stock rise significantly. This week’s Featured Pros are: 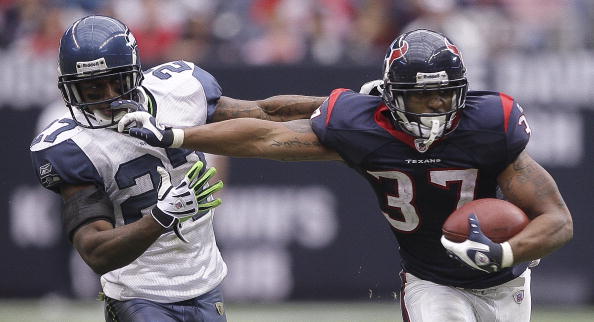 Chet Gresham – Razzball.com. The “Doc” has a large following of patients that look for his fantasy football cures on Razzball and through Twitter.

Arian Foster’s name comes up a couple times as a guy worth reaching for, but there’s a big debate on Jahvid Best and no love for C.J. Spiller. Read each expert’s player insights…

The top-tier rookie running backs are obvious candidates to land in one category or the other, since Ryan Mathews, Jahvid Best and C.J. Spiller all have had excellent preseasons.

Jahvid Best looks sensational, so the obvious question is: How early is too early to draft him? He has a reasonable chance to finish as a top-10 or even a top-five running back, but fantasy owners are reluctant to take him in the first round or two because he has no NFL track record. Fair enough, but Best is an early-round gamble worth taking, in my opinion. I’ve heard people talk about how they “reached” for Best in the middle of the third round in a 12-team draft. That’s not a reach. In my updated Sept. 1 rankings, Best will be among my top 10 running backs because I really do believe he’s going to outperform Ryan Grant, Cedric Benson and some other guys who have NFL track records. You won’t be getting Best in the middle of the third round if you play in one of my leagues.

As for Ryan Mathews, my earlier reservations about him were (1) that he didn’t wow me the handful of times I saw him play in college, and (2) that the Chargers’ running game was so dismal last season, which had at least a little something to do with the offensive line. I no longer question Mathews’ ability — his performance in the preseason has laid that concern to rest. San Diego’s run blocking is still a mild concern, particularly with left tackle Marcus McNeil still holding out. But I think Mathews and Best are both worthy of the hype.

It’s not that C.J. Spiller isn’t worthy of the hype. He might be every bit as talented at Best or Mathews. But his overall situation scares the bejesus out of me. His offensive line is bad. Buffalo has no passing game. The opposing defenses in the Bills’ division range from good to great. Spiller might produce good rookie numbers, but even if he does, I think he’s going to do it in sort of an erratic way, with some big weeks and some disappointing weeks. I don’t think he’ll be able to provide the sort of week-to-week consistency that fantasy owners crave.

Arian Foster – Perhaps nobody has had a better preseason than Foster. His main competition has either been injured (Ben Tate) or suffered from fumblitis (Steve Slaton). Meanwhile Foster has answered the bell with a 110 yard effort in the only true preseason test. It’s looking like the back that combined for 242 yards (216 rushing) and 3 TDs in Weeks 16 & 17 is for real. He’s big (6’1″, 229 lbs) and runs with authority. While I caution you because Gary Kubiak has a track record of being fickle with his backs, Foster looks like he’s the real deal.

Johnny Knox – Pretty much everybody assumed that Devin Hester and Devin Aromashodu would flourish for the Bears in Mike Martz’s system. Johnny Knox was largely overlooked despite his ridiculous 4.34 speed. However, through training camp Knox has emerged as the Bears’ number one option in the passing game. Now he has everybody gushing at the potential for a breakout season. With a pass-happy offensive coordinator and a big armed gunslinger under center, I am totally buying into the hype.

Jahvid Best – It’s not that I don’t believe that Best has talent or won’t have his moments in his rookie season. I’m just afraid he’s going too early in fantasy drafts. He has had multiple surgeries (elbow, hip, shoulder) as well as a concussion before taking a snap in the NFL. Even if he is able to overcome those injuries, he’s playing on a team that tends to get in a big hole early, forcing them to abandon the run. He has just too many risks for a late third/early fourth round fantasy pick.

Beanie Wells – Beanie Wells could either turn in a very productive season or his injury concerns and fumbling issues could keep him in a full-fledged running back by committee all season long. Beanie had four fumbles, losing two, as a rookie in just 176 carries. He coughed one up over the weekend against the Bears, which is a sure-fire way to anger Ken Whisenhunt. Tim Hightower is waiting in the wings should Beanie stumble. I’d rather have a safer selection for my late second/early third round pick.

Arian Foster: He is moving up draft boards faster than Antonio Bryant took that 8 million dollars for doing nothing.  There are plenty of reasons to not draft early, but if you drafted Foster in the 10th round you are pretty happy right now.  Why are you happy?  Because coach Kubiak finally has his cut and go, downhill runner.  He showed he had ability at the end of last season, but the Texans went out and drafted Ben Tate, but the Fantasy Gods looked out for Foster by breaking Tate’s ankle and tearing ligaments and I think they even rained on his birthday party.  And then Foster just keeps running with authority in preseason.  Add that to an extremely strong passing game and you have a recipe for a strong season. The hype is real and it is spectacular.

Jabar Gaffney: He may be a good example of a player having a nice preseason that looks like it could translate into regular season production.  Coming into this season the Broncos wide receiver situation has been extremely difficult to decipher.  It’s still pretty muddled, but Gaffney has been targeted by Orton the most out of all his receivers.  When playing time is up for grabs like it is in Denver these preseason numbers can be helpful.  Another Bronco receiver could easily shine and move ahead of Gaffney, but right now the #1 job is his to lose.

C.J. Spiller: The Fantasy Gods have also been looking out for Spiller by breaking Fred Jackson’s finger and spraining Marshawn Lynch’s ankle (man these football gods get around).  So Spiller has been able to get the 1st team reps in preseason and he has looked good in doing so, but there are a few factors that should tap the brakes on the hype machine.  First, Lynch should be back for the season opener.  Second, Fred Jackson only hurt his finger and shouldn’t be slowed down once he gets back, which shouldn’t be too far away. Third, he plays for the Bills.  Yes, Spiller is an amazing talent, but he has quite a few factors to overcome to live up to his preseason hype.

I want to thank our Featured Pros for sharing their insights! To read more great stuff from them, you can visit their profile pages here on FantasyPros or go to their websites directly at: