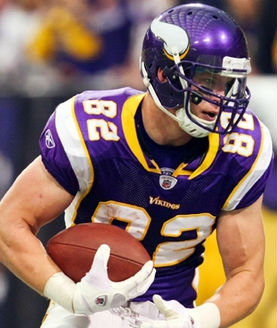 We’re back again with a new batch of consensus waiver wire rankings. After a crazy week filled with injuries and surprising performances (good & bad), the waiver wire is bound to be a key focus for many fantasy owners.

As a refresher of how our process works, we asked several featured experts to rank a list (provided by us) of RB/WR/TE based off of rest of season value. Their picks were then combined to determine consensus waiver wire rankings.

Before we get to the rank list, here are the experts that pitched in to produce this week’s advice. You can click each of their names to follow them on Twitter for more insight.

We also asked each expert to share a specific piece of advice for this week’s waiver wire (player to target, strategy tip, etc). Here are the experts’ suggestions.

Jerome Simpson returns to action after a three-week suspension, and that makes him one of the top waiver pickups of the week. That is, of course, unless teammate Kyle Rudolph is available—the 6’6″ beast had a monster Week 3, sure to attract the attention of fantasy owners everywhere if he is available.

On the flip side, if you have been around long enough, you know not to pick up Tashard Choice. He has been in this position before and failed his fantasy owners miserably. With Fred Jackson reportedly coming back this week and C.J. Spiller’s injury less severe than initially feared, Choice is going to be back to his duties as the No. 3 running back soon enough.

The byes are upon us, so let’s have a little refresher on bye-week waiver strategy. If you have an expendable roster spot, look at the players that other owners may be avoiding due to their teams’ off week and fill your roster spot with that player (I see you, Rashard Mendenhall and Donnie Avery). Never roster two kickers in standard leagues; it’s just not worth it. If you have a can’t-drop TE coming up on a bye but don’t have a roster spot you want to use on a one-week filler, do your best to execute a 2-for-1 or 3-for-2 trade in time to grab that backup TE before game time and fill that newly-open roster spot. Above all else, don’t blow your waiver budget on a one-week value guy like Tashard Choice if you don’t need him to start in the one week he’ll have value (Week 4 for Choice).

As week four approaches and the pool of healthy starting running backs continues to shrink, grab the Jets’ Bilal Powell to give your bench a nice boost. Despite the fact that the NYJ running game has been less than impressive, there aren’t many backs available on waiver wires that have decent roles (9 touches wk 2, 12 touches wk 3) with the possibility of winning a starting gig outright. If there is one running back that is ready to cough up his job, it’s the fantasy world’s favorite slug, Shonn Greene and his 2.8 ypc this season. Go grab Powell and watch his value rise.

Kyle Rudolph is my #1 target this week. If your current tight end is named Jermaine Gresham, Fred Davis, or even Greg Olsen, then Rudolph will prove to be an instant upgrade going forward. Rudolph is a target hog when the Vikings get into the redzone, and that’s exactly what you want out of the tight end spot.

One second year player that I am very high on this year is Minnesota Vikings TE Kyle Rudolph. Rudolph is playing in an offense that is evolving with second year QB Christian Ponder. Rudolph has scored three touchdowns in the last two weeks and has topped five receptions in Week 1 and Week 3. He will struggle with the consistency of the elite tight ends due to his youth and the youth of his QB. He will be an excellent tight end to guide you through the bye weeks and has the potential to become the best tight end on your roster.

With seven catches in week three Kendall Wright is slowly and quietly earning a bigger role in the Titans offense. It is easy to think of Nate Washington as the top receiver in Tennessee but that could not be further from the truth. Kenny Britt is back and despite not playing a full complement of snaps received a team-high 11 targets in week three which tied him with Kendall Wright. Wright is a special player with top-20 caliber talent who can operate as a vertical as well as an underneath threat.  He has explosive run-after-the-catch ability and his role will continue to expand at Nate Washington’s expense. Available in 70 percent of Yahoo! leagues, Wright should be a top waiver wire target this week.