Cam Newton is on fire but we’re going to start Nick Foles instead. Yep, we’ve been hitting the bottle again.

Last week we did something no one else, to my knowledge, has done before. We showed everyone the exact DraftStreet lineup they needed to beat to win a prize in our $6,000 FantasyPros Challenge. Over 200 of you were able to win the challenge (thank Anthony Fasano…or the drinks we were having when we selected him as our starting TE). Let’s move on to Week 9, shall we? Here’s the lineup you need to beat to claim a share of the bonus pool. 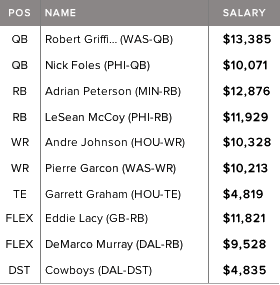 Disagree with any picks? Take our Challenge!

To help you find some players to beat our lineup, we asked the top daily fantasy pros to each give us a player they love for Week 9 that’s not in our lineup. Here are 7 guys that they think will crush it in Week 9…

Name one player that you will most likely have in your DraftStreet lineup, that is not in the FantasyPros lineup?

CAM NEWTON (QB, CAR) – $17,463
Despite the second highest salary for QB’s, Newton is the foundation for my line up this week. Newton has been on a roll the last 3 weeks with 6 passing TDs, 2 rushing TDs and zero turnovers. The advantage to starting Cam is his rushing yards, those yards are invaluable from the QB slot and he has 21 rushing attempts over the last two weeks. This week he faces the Atlanta Falcons at home who are allowing the sixth most fantasy points to QB’s and tied for the second highest total of passing TDs allowed after 8 weeks. In Cam’s two games against his hometown Falcons last year, he had 502 passing yards and 4 passing TDs with 202 yards rushing and 2 rushing TDs. The 2013 Atlanta Falcons defense coming into Charlotte this weekend is a shell of what it was in 2012. Cam should easily total 300 yards and 2.5 TDs.
– Scott Whitfield, RotoRankings

ZAC STACY (RB, STL) – $8,638
Assuming he’s healthy and good to go, I really like Zac Stacy against the Titans this week. Tennessee has allowed just under 100 rushing yards and one rushing touchdown per game this season. As we saw on Monday night against the Seahawks, the Rams relied heavily on Stacy. It would behoove them to do the same this week against a poor rush defense. Again, assuming his ankle will be fine, I’m putting Stacy in my Week 9 DraftStreet lineups.
– Zach Greubel, Gridiron Experts

STEVAN RIDLEY (RB, NE) – $8,904
One player I really like this week is Stevan Ridley. At $8,904, he is priced quite nicely for a guy going up against a Steelers defense giving up the eighth-most fantasy points to opposing running backs. Sure, he has to deal with Brandon Bolden and LeGarrette Blount stealing some playing time, but Ridley is still going to get a lot of touches.
– Alessandro Miglio, ProFootballFocus

STEVE SMITH (WR, CAR) – $9,876
If I had to pick a player that should be in most daily fantasy lineups, I’d be going with Carolina’s Steve Smith. After racking up 8 games last season over 70 yards, he has yet to accomplish that once through 7 games this year. Going against an Atlanta defense that has been killed by opposing #1 wideouts and with Newton heating up, Smith is due for a huge game. At $9,876, I believe he is a bargain.
– Mike Tagliere, TagsFantasyFootball

TERRANCE WILLIAMS (WR, DAL) – $9,630
The standout rookie brings a four-game scoring streak into a home game matchup with the Vikings, who have allowed at least one receiver to hit paydirt in six straight games (9th best WR matchup at 26 fantasy points per game).
– Justin Sablich, The New York Times

DANNY WOODHEAD (RB, SD) – $10,978
Woodhead is a monster and a top 12 RB that seems forgotten about because of the bye week. His matchup vs Washington is ideal and he serves as the passing down back as well as getting looks at the goal line. At just over 10k he is a bargain to me this week.
– Ken Zalis, FansFantasyFootball

I’d like to thank our Featured Pros for sharing their picks for this weekend’s DraftStreet contest.

Wondering how we came up with our FantasyPros lineup (aside from the stiff drinks)? We created custom consensus rankings from a few of the top fantasy experts and used our Salary Cap Analysis report to find players they ranked higher than DraftStreet’s rankings (based on salaries). We then selected a mix of studs and sleepers to stay within the total salary cap.

Note that we tried to stay away from players with questionable playing status since we won’t be changing the lineup unless a player is officially inactive (in other words, advantage to you for being able to leverage the latest news). We’re also using expert rankings as of Thursday afternoon, so they’re not as fresh as the rankings you’ll be able to use. Yep, we’re already making excuses!

Good luck this week with all your leagues and contests!