The Seattle Mariners traded All-Stars Robinson Cano and Edwin Diaz to the New York Mets earlier this week. In return, the Mariners received prospects Gerson Bautista, Justin Dunn, and Jarred Kelenic and the substantial contracts of Jay Bruce, Jason Vargas, and Anthony Swarzak. Vargas could see some spot starts and the prospects received likely won’t have any fantasy value in 2019, so I’ll be focusing on Robinson Cano, Edwin Diaz, Jay Bruce, and Anthony Swarzak for fantasy purposes in this article. Besides, the unpredictable nature of Mariners General Manager Jerry Dipoto could see any of the assets he just received shipped off at a moment’s notice.

I understand the move from the Mets perspective if they want to win now. They’ve unloaded high-priced veterans with limited upside and received one of the top young closers in the game and an aging, but still valuable Cano. From the Mariners side, I think Dipoto has something else up his sleeve, because, well, he always does. Bautista is a good young arm but needs refinement and the other prospects are multiple years from the big leagues.

I’ll start with Robinson Cano who missed 80 games to suspension in 2018. The positive test was for Furosemide, a diuretic to help people with heart, kidney and stroke issues.

Cano’s value has dropped significantly going into 2019 largely due to the suspension and his advanced age (heading into his age-36 season). Despite the suspension in 2018, his skills remain intact. In fact, Cano finished with a career-high 41.5% hard contact which led to a .303 batting average, his highest mark since 2014. Naturally, Cano’s power has dipped, but he still managed a very solid 136 wRC+ and a .364 wOBA in 80 games last season. Check out his trends at the end of 2018. 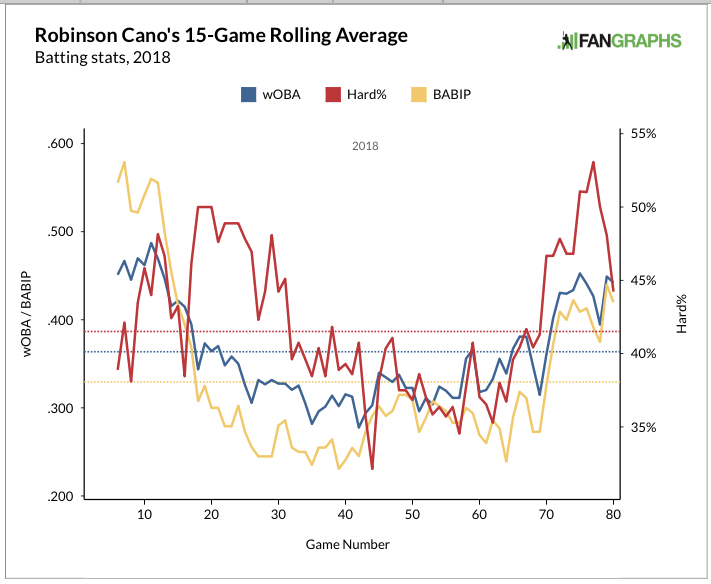 In addition, Cano still has great awareness of the plate and rarely goes down on strikes evidenced by a 13.5% strikeout rate. Cano saw his zone percentage (percentage of pitches thrown inside the zone) decrease which resulted in an improved walk rate. Cano is still adjusting at the plate, a very good sign for the veteran.

In terms of the move from Safeco Field to Citi Field, the value for Cano may decrease somewhat. Let’s take a look at the ESPN Park Factors for home runs. Safeco checks in at 15th overall with a value of 0.984 (1.0 being league average) and Citi Field is 22nd overall at 0.888. As previously mentioned, Cano’s power is slowly declining which is expected given his age. I’m not all that concerned with the park change, as Cano has shown us that his skills at the plate are still intact. Per BaseballSavant.com, Cano ranked 6th with 51.7% of his batted balls hit at least 95 MPH in 2018. The move the National League forfeits Cano’s option to DH once in a while and may hurt his potential to maximize plate appearances. I could see the Mets using Cano at first base to give out-of-nowhere rookie Jeff McNeil more playing time. I love the high on-base percentage players hitting in front and behind Cano including Brandon Nimmo, Michael Conforto, and Jeff McNeil. In general, the move appears neutral for Cano’s value. Expect a high batting average, 18-20 home runs, and very good run production. Based on early draft data, Cano is going after pick 125, which is steal given his floor.

Edwin Diaz had an incredible breakout in 2018 with a 1.96 ERA, 0.79 WHIP, 124 strikeouts, and a league-leading 57 saves. These numbers were good enough to lead all closers in fantasy value for 2018. In fact, the Mariners led Major League Baseball in save opportunities with 81. The Mets, on the other hand, were 21st with 59 save opportunities. While Diaz’s opportunities were likely going to be reduced based on mathematical regression, the fact that his current team (Mets) may not supply as many save opportunities will cap Diaz’s value.

Diaz sports a two-pitch arsenal with an elite 98 MPH fastball and a devastating slider which led to an incredible 18.9% swinging strike rate last season. Diaz also improved his first-pitch strike percentage by nearly 12% from 55.8% to 67.5%. That improved control of the zone dropped his walk rate from an unsightly 11.5% in 2017 to 6.1% in 2018. I believe in Diaz’s elite strikeout potential, a rate that ended at-bats at a 44.3% clip, second to only Josh Hader. His success is directly tied to his fastball velocity and spin rate. Check out his fastball usage and spin rate fluctuations from the 2018 season. 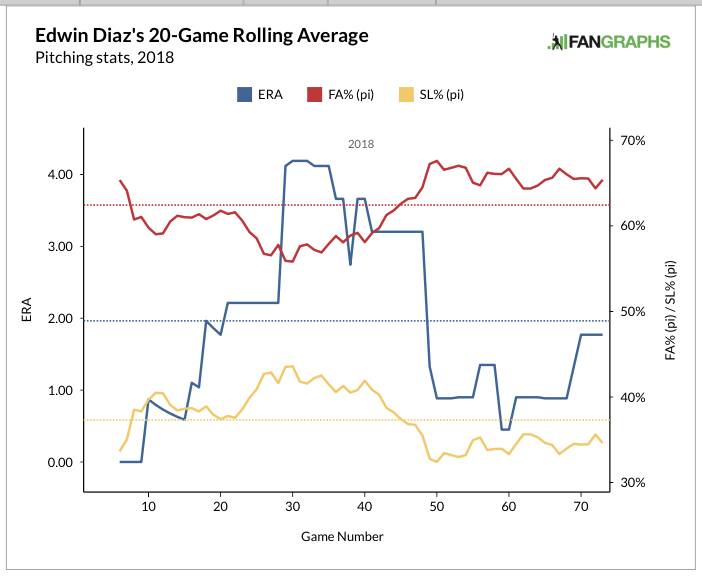 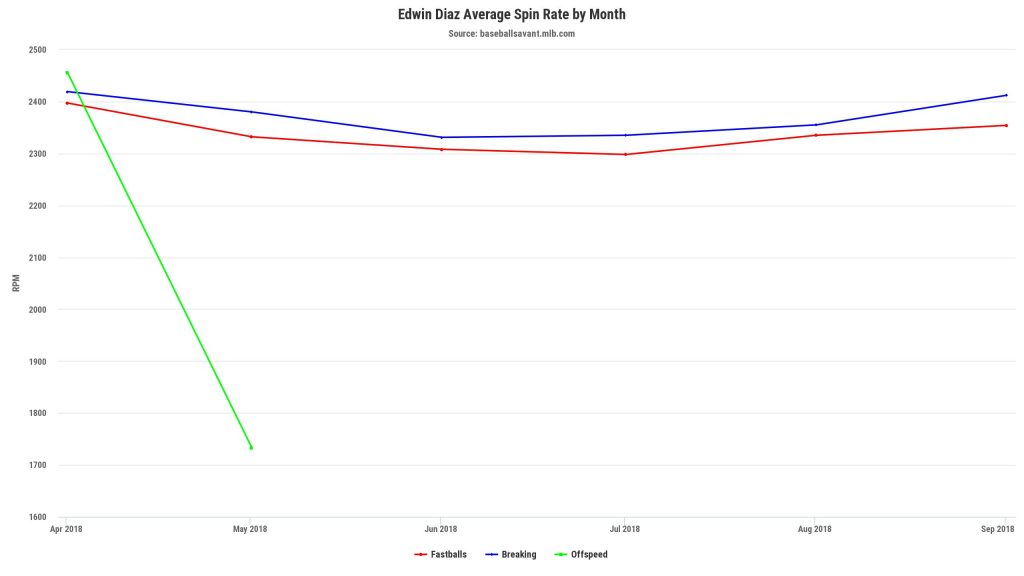 You can see Diaz increased his fastball usage in the second half and his spin rates improved making the fastball that much more effective. I have concerns that Diaz could see his control issues resurface, especially with the electric stuff he possesses. However, I’m not going to dock Diaz’s value below the top three or four closers for 2019 given his elite strikeout rate.

Last season was a year to forget for Jay Bruce. Bruce played in only 94 games and hit .223 with only nine home runs. Bruce will turn 32 years old in the first week of April, but it seems like he has been around forever. This is not the first time we’ve seen Bruce as a major batting average drain. Back in 2014 he hit just .217 and followed that season up in 2015 batting just .226. He did manage to pop 30-plus home runs in both 2016 and 2017 before last year’s disaster, so maybe he can rework his stroke.

That being said, his plate discipline is headed in the wrong direction. His contact rates and swinging strike rates are headed in opposite directions, and not in a good way. Bruce sported a career-worst 72.7% contact rate with a just as poor 13.3% swinging strike rate in 2018. Bruce also suffers from a low BABIP thanks to his slow foot-speed and an elevated fly ball rate. In addition, he also struggles against the shift thanks to a 72.5% pull rate on ground balls. In fact, only 4.4% of his ground balls are hit to the third base side. As you would expect, Bruce hit just .188 on ground balls in 2018 largely due to the aforementioned shift. Over the course of Bruce’s career, he’s struggled against the shift but hit just .257 when shifted against in 2018.

In regards to the power issues, I’m not going to read too much into them because Bruce was hurt most of the season with a myriad of injuries including hip, back, and foot issues. Given health, I think Bruce can produce above-average power numbers, albeit with a sub-.250 batting average. That being said, his advancing age and nagging injuries could continue to plague Bruce in the upcoming season. I’d leave him on waivers unless you play in AL-Only or 15-team and deeper leagues. Be sure to check his trends because he’s typically good for one extremely hot-streak throughout the year.

I’ll close with Swarzak but will he close for the Mariners in 2019? Currently, Swarzak is shown on RosterResource.com as the closer. However, there are some troubling signs from the former Met who turned in a very good year in 2017 only to sputter in 2018 in part due to injuries. Swarzak’s swinging strike rate and chase rate plummeted while his contact rates and walk rates went through the roof. Anytime injuries are involved, I’m willing to give a deeper look upon a healthy return. Meaning, Swarzak’s Spring Training will be ever so important. The strikeout upside is intriguing, but until I can see evidence of an increase in velocity and a return of control, I’m willing to leave him off my draft board. The exception being deeper formats and/or Saves + Holds leagues where he’s worth a look.