Six weeks ago, I collected some of the finest minds in the dynasty football community to conduct an experiment. They all thought they were doing a simple dynasty start-up mock draft but my goal was to hold off on sharing the results until free agency had been completed. The purpose, of course, it to study how quickly everything can change. Everyone approaches dynasty leagues differently but many appear to believe you can confidently build for the future. Today, I’ll show you why that isn’t the case and how trying to win now is almost exclusively the best answer every single season.

The league settings were as follows:

I highly respect each of the analysts in this list, hence my inviting them in to participate. If you don’t already, give them a follow on Twitter. I’m confident you will enjoy the content they put out every day.

I did this exercise last season as well and came away having learned some big lessons. Several of my players had their futures pulled out from under them when their teams brought in players who would steal from their volume. This year, I played it much differently. My goal was to build a team that was a championship contender from the get-go. That doesn’t mean I needed to grab old farts like Tom Brady and Drew Brees while entirely mortgaging the future, but as you can see, this team is ready to win now. Toward the end of the draft, I added a group of players who could see their stocks take off in the right situation. Several of those became monumental hits just within two months.

Carlos Hyde may be the starting running back in Andy Reid’s running back haven of an offense. He is among the 20 most talented running backs in football but didn’t the volume over the second half last season. I figured there was immense upside if he landed in the right spot which is exactly what happened.

Equanimeous St. Brown was a big winner as well. The Packers didn’t add a Golden Tate or Tyrell Williams, instead, sticking with their guys. What’s more, is that Geronimo Allison wasn’t tendered for any compensation, showing that the Packers don’t value him as a starter. If St. Brown can claim that second starting job opposite of Davante Adams, you can expect to see him drafted in the top 60 picks this year, a full 140 picks above where I selected him.

C.J. Anderson, David Moore and Adrian Peterson all have quite a bit of upside if anything happens to Kerryon Johnson, Doug Baldwin or Derrius Guice. Everyone else on the roster, except Dallas Goedert, is ready to contribute right away which is important in a deeper dynasty format like this one.

If I could do things again, I would have taken another safe pass-catching running back in the 10th like Nyheim Hines rather than my second tight end, no matter how much potential Goedert may have. Hines would have been my third starting running back, and while that doesn’t sound ideal, it is much better than McCoy or Burkhead starting most weeks.

Odell Beckham (WR3 – CLE)
My buddy, Mike Tagliere had Beckham fall into his lap with the ninth overall pick. Now that he is in a great situation with Baker Mayfield, Beckham would be #1 on both our big boards in a dynasty startup.

Tyreek Hill (WR8 – KC)
Hill’s stock has plummeted with potential legal issues (again). If this draft had happened today, I’ll bet Hill would slide into the fifth round. There is a chance we see no suspension but more than likely, he will miss half the season and perhaps worse (see Adrian Peterson, Ray Rice, Kareem Hunt).

Marlon Mack (RB18 – IND)
Mack didn’t change teams or come into a better scheme. Rather, the news is that Indianapolis didn’t touch the running back position. Perhaps they will add in the draft, but the word out of the front office is that Mack is their guy and they expect him to be a workhorse in 2019 and beyond. I’d grab him in the top 15 running backs in dynasty right this moment.

Dak Prescott (QB10 – DAL)
There wasn’t much in this group that changed, but I wanted to highlight the fact that Prescott was the 10th quarterback off the board. This isn’t any kind of knock on Curtis Patrick, as I too recognize that Dak has been a steady fantasy asset. Rather, this shows the effect adding a star wideout like Amari Cooper can have on an offense and particularly his quarterback.

Sammy Watkins (WR35 – KC)
I mentioned Tyreek Hill but we’ve got to talk about the impact those rumors have on Watkins’ fantasy value. Were he to become to number one receiver for Patrick Mahomes at the ripe age of 25, I’d venture to say Watkins would be a top 15 wideout next season and perhaps even higher in dynasty leagues.

James Washington (WR38 – PIT)
There seemed to be some legitimacy to the Antonio Brown trade talks two months ago, but we all figured they would just replace him in free agency to the best of their ability. Donte Moncrief was their top addition, and while that isn’t nothing, Washington should suddenly see his snaps and targets multiply in a great offense.

Rob Gronkowski (TE12 – NE)
Whether or not Gronk will stay retired, he has minimal, if any dynasty value at this point. We all knew it was a strong possibility, hence him slipping below Trey Burton, but this will crush a fantasy roster. The primary takeaway here, however, is that Travis Kelce is just 5 months younger than Gronk so he may not be as useful in dynasty leagues as everyone seems to think.

Latavius Murray (RB60 – NO)
The single largest winner in the off-season was Murray, who was quickly signed by the Saints to take over the Mark Ingram role. Murray may be a better version of Ingram, who was a top 10 fantasy back multiple times in the New Orleans’ dual-back system. Don’t be surprised if Murray is taken 100 picks earlier in dynasty leagues this summer.

Carlos Hyde (RB63 – KC)
Hey, one of my players! Damien Williams isn’t going anywhere, as indicated by the extension Kansas City gave him, but think of things this way: If you had a chance at Carlos Hyde or Damien Williams in the same offense last off-season, who would you have picked? It is Hyde and not even close. Williams was a free agent in most dynasty leagues and no one wanted him. Williams was impressive in the playoffs, but Hyde is much more talented and should win this job outright.

1) Opportunities open up for talented young WRs
From Chris Godwin and James Washington to Mike Williams and Dante Pettis, the lesson remains the same: If an NFL team spends draft capital on a wide receiver, there will be an opportunity carved out for them before long (unless you are Kevin White who breaks three bones in three years). Draft with this in mind and navigate the trade market searching for these suddenly tired trade-values before their stocks soar in the first or second off-season.

2) Opportunities die for talented mid-aged RBs
Never. EVER. draft dynasty running backs for the future unless you can get a clear-cut workhorse back like Todd Gurley, Saquon Barkley or Ezekiel Elliott. How many times do we have to see a talented, but scheme-reliant back fall from the top of fantasy rankings before we stop making the same mistakes? Players like Devonta Freeman, Jay Ajayi and LeSean McCoy always have a short life span near the top so focus on the now each and every year. This year, we’ll see players like Chris Carson., David Johnson and Phillip Lindsay go under-drafted in dynasty leagues before leading their teams to championships. Get wide receivers early and a plethora of running backs with immediate volume security later on.

3) Tying yourself to backups in great offenses is golden
I mentioned Hyde, the Packers’ receivers and all my other bench additions earlier, but there are also plenty of others. This is where Davante Adams, Michael Thomas, JuJu Smtih-Schuster, James Conner and Eric Ebron all came from. There will be many more of the same mold behind them so don’t hesitate to add the Dallas Goederts and Malcolm Browns of the world. On the wide receiver side of things, Deon Cain and whichever mid-round wide receiver the Chiefs draft this off-season should become targets. 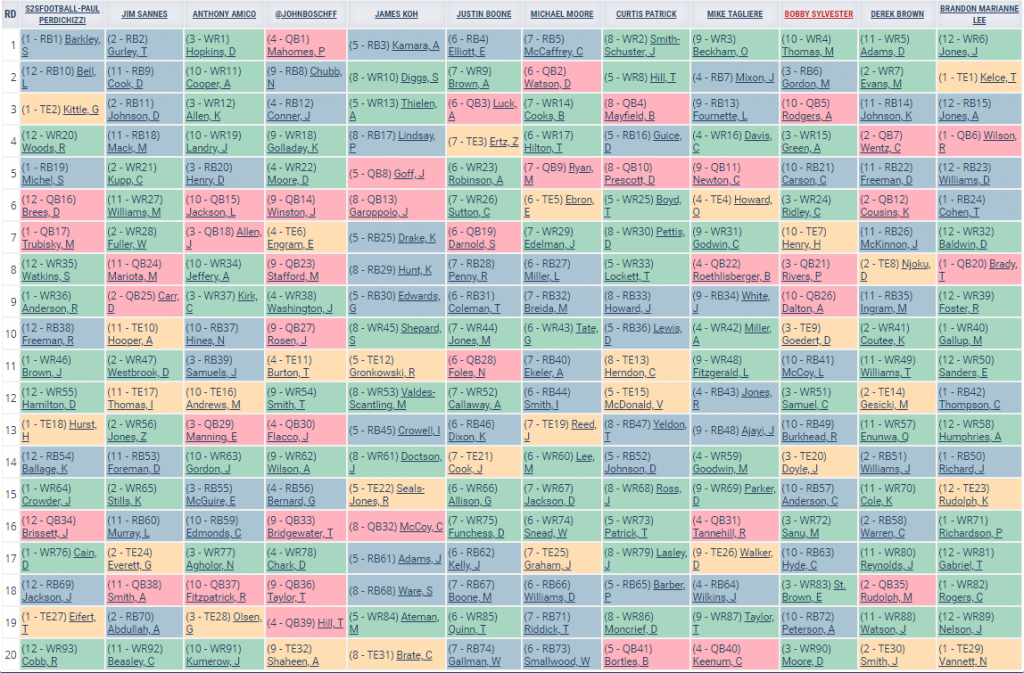 Check out all of Mike Tagliere’s NFL Draft Scouting Reports >>

Bobby Sylvester is a featured writer at FantasyPros. For more from Bobby, check out his archive and follow him @BobbyFantasyPro

Who is the Top Rookie Running Back? (2020 Fantasy Football)