Gary Sanchez has bounced back in a major way to open 2019.

We’re going to change things up a bit on this iteration of Statcast Risers and Fallers, diving into the typical week’s highs and lows of Statcast performance while also looking back over the last month to identify the players who have been most consistent. As a result, I’ll cut out the exit velocity and barrel components for the week and just focus on xwOBA. 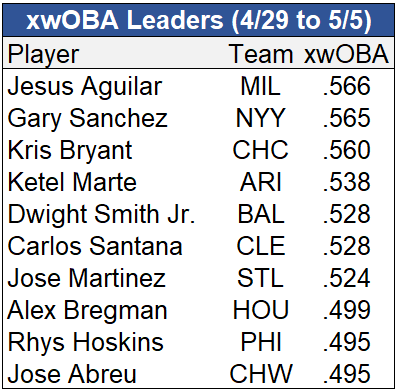 Jesus Aguilar finally arose from his slumber to the tune of a .566 xwOBA with three homers and seven RBIs on the week to go along with an even K:BB ratio. Owners in deep leagues should scoop Aguilar up if he is available. However, those in 10-12 teamers should hold off until he secures more consistent playing time.

Gary Sanchez continues to destroy baseballs and is now up to a .714 slugging percentage on the season, backed up by an MLB-leading .864 xSLG that leads second-place Cody Bellinger by an astounding 116 points! Sanchez is silencing the critics that overrated his offensive decline in an injury-riddled 2018 season and re-affirming his place as the game’s top hitting backstop.

This past week might be known as the one where Ketel Marte officially busted out, bringing his xStats more in line with his well above-average box score production. Marte is the rare player who combines an aversion for whiffs with the propensity to barrel the ball.

For a nice change of pace, a Baltimore Oriole, Dwight Smith Jr., has finally cracked the xwOBA risers list rather than the fallers. He brings 20-20 upside to go along with a decent batting average and on-base percentage. His career MLB triple slash in 240 plate appearances reads .290/.350/.484, but his xStats batting line falls far below that. Smith is a solid situational play and streaming candidate against right-handed pitchers. 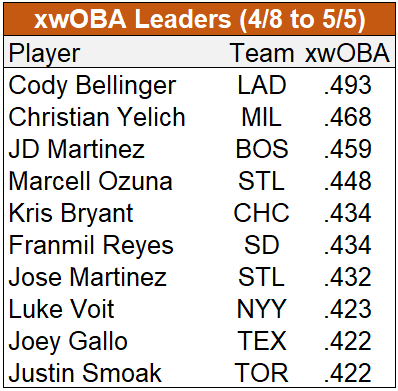 Little additional ink needs to be spilled about Bellinger’s miraculous start to the season. He, along with Christian Yelich, J.D. Martinez, and Mike Trout (.403 xwOBA in these four weeks), represent the game’s best hitters.

Martinez and Padres outfielder Franmil Reyes have been baseball’s two unluckiest hitters in 2019, with xwOBA markers exceeding their actual wOBAs by 75 points. Both players are absolutely stinging the ball and have simply been subject to poor batted-ball luck. Martinez owners should obviously hold him while those interested in Reyes should strike, as the window to trade for him is closing rapidly.

The other Martinez on the list, Jose, has heated up over the last month and forced his way into consistent playing time in a crowded Cardinals outfield. Jose Martinez is one of the most underrated hitters in baseball with a .311 batting average since 2017 that ranks as the fourth-best in the majors. He’s still only owned in 55-65% of leagues, so scoop him if you have the chance.

Luke Voit is proving that his 45-day hot streak to conclude 2018 was no fluke, His .429 xwOBA since August 1, 2018, ranks third among MLB hitters behind Yelich and Trout. Outside of a bit of swing and miss to his game, Voit profiles as a near perfect hitter — one who makes good swing decisions at the plate and drives the ball all around the field at elite exit velocities. 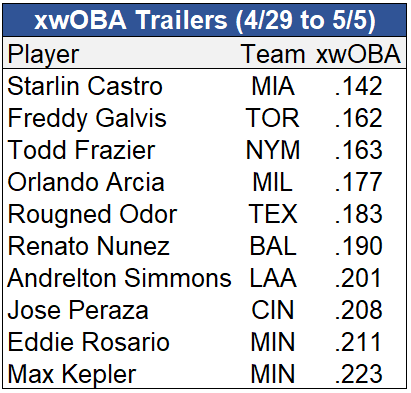 Lo and behold! We finally have the top xwOBA trailer wearing something other than Baltimore Orioles colors. Starlin Castro of the Marlins paced the trailers this week with a morbid .142 xwOBA. Yet Castro is still the same hitter he has always been — high contact, low exit velocity — and should improve in coming weeks.

Todd Frazier has been horrendous in his return from injury, batting .159 with a .295 slugging percentage in 45 plate appearances. With J.D. Davis still profiling as a Statcast darling and Jed Lowrie set to soon make his season debut, one must wonder how much longer the Mets will continue trotting out Frazier on a regular basis.

Despite capping things off with a home run on Sunday, Rangers second baseman Rougned Odor had an awful week with a .183 xwOBA and a mere three hits in 28 plate appearances. Things don’t look much better on the season, as he sports a miserable .465 OPS. Odor has experienced these dips before only to go on month-long hot streaks, so keep him on your bench for another couple weeks before cutting bait.

Could we be witnessing the beginning of some hard regression for a Twins offense leading the majors in slugging percentage? Lefties Eddie Rosario and Max Kepler struggled mightily last week, combining for six hits across nearly 60 plate appearances. Keep an eye out for how these players and the Twins progress — Rosario hit his 12th homer of the season on Monday — in the coming weeks. 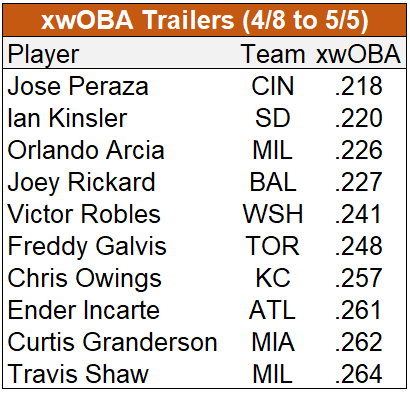 While he had a bit of a surge late last season, I think it’s time to acknowledge that Jose Peraza is a bad hitter. His xwOBA has actually trended down in each of the last four seasons. He might pilfer some cheap home runs once the weather gets warmer in Cincinnati, but most fantasy owners don’t have the time to wait for that to happen.

Victor Robles is a great long-term keeper asset, but his value in redraft leagues will be middling once the regression train brings his box score numbers more in line with his xStats. Consider that Robles has the third-worst average exit velocity among all batters with at least 30 batted-ball events this year. Get something for him while other owners are transfixed by his six homers, eight steals, and spot atop the Nationals lineup.

In case anyone had aspirations for Freddy Galvis suddenly turning the corner with his hot start, those have been dashed over the last several weeks. He is a great defender and clubhouse presence, but he should be far away from fantasy lineups.

I have mixed feelings on Travis Shaw. On one hand, he is in his worst rough patch since he became an MLB regular, one that is permeating to every aspect of his statistical performance. However, let’s not forget that Shaw concluded 2018 with arguably the best stretch of his career as well, so maybe this is just an extreme case of regression for a streaky hitter. His ownership levels have dipped into the mid-60% range for both Yahoo and ESPN, so grab him if you’re in need of a cheap power source.

How to Evaluate Rookies & Prospects in Fantasy Baseball