The Statcast numbers suggest Justin Smoak is on the verge of a breakthrough. Pirates first baseman Josh Bell is the hottest hitter in baseball, finishing second on the xwOBA leaderboard for the second straight week. There is little in his profile that indicates a slowdown, with a robust 19% barrel rate to go along with xStat readings that all place in the 97th+ percentile of MLB. What makes Bell truly special is his ability to barrel the ball at an elite rate while limiting swings and misses, a rare quality only replicated by names like Mike Trout, Christian Yelich, and Anthony Rendon.

After taking some time to adjust to MLB pitching, Vladimir Guerrero Jr. has finally arrived, smacking four home runs last week on his way to a .570 xwOBA. Two of the home runs were absolute no-doubters, both exceeding 435 feet to dead center in Oracle Park. What makes Vlad Jr. truly special is that he is the rare player — perhaps the first player ever — to possess both 80-grade raw power and an 80-grade hit tool. It will be fun to track his progress on Statcast from here on out.

At first glance, it seems like Red Sox shortstop Xander Bogaerts had a non-descript week with two RBIs, two runs, and no home runs. But consider that he struck out only once in 22 plate appearances while stinging over half of his batted balls at 97 mph or higher. Bogaerts’ output to date tracks very closely to his solid 2018 numbers, but don’t be surprised if he finds another gear in the next couple weeks. He may have already started by going 3-for-5 with a homer on Monday.

Owned in only 44% of Yahoo and 52% of ESPN leagues, Toronto first baseman Justin Smoak presents one of the best waiver-wire acquisition candidates of the year. While everyone is focused on stashing the next prospect call-up, snag Smoak, whose .405 xwOBA ranks 21st in 2019. His boxcar figures — six home runs to go along with 20 runs and 21 RBIs — seem pedestrian, but that’s due to poor batted-ball luck, evidenced by a 67 point wOBA-xwOBA deficit.

Just when I was ready to stick a fork in Mariners first baseman Dan Vogelbach after he showed up on the xwOBA trailers list last week, he rebounds with a top-10 showing this week. After hitting four home runs last week and another one on Monday, Vogelbach now has 14 on the season. His OPS sits at 1.059 and his wRC+ is 180. However, I am still skeptical of his approach, which involves near league-low swing levels that allow pitchers to consistently get ahead of him in counts. Recurring readers of this segment will recall that xwOBA isn’t kind to the Baltimore Orioles (or maybe it’s the other way around). That trend continues this week with two Baltimore players, Chris Davis and Dwight Smith Jr., rounding out the top xwOBA trailers. While Davis has zero fantasy relevance, Smith is owned in nearly 60% of leagues due to his power-speed combo. Despite the bad week, hold onto Smith, who was a good minor league hitter and owns a 114 wRC+ in 293 career MLB plate appearances.

Right when it looked like Yasiel Puig was out of his early-season slump, he puts up a 3-for-22 week and sprains his shoulder. While Puig is surely testing the patience of some owners, remember that he has gone through bouts like this before. He is also still on pace for 24 home runs, 86 RBIs, and 24 steals despite a horrid 59 wRC+. Exercise patience.

Like Puig, Tigers outfielder Nicholas Castellanos is likely frustrating his owners with four home runs and 13 RBIs on the year. His xStats are also at near career-low levels. However, I would hold mainly on the hope that he gets traded, something which almost happened last offseason. Not only would a trade put Castellanos in a better lineup, but it would also likely put him in a ballpark more conducive to his center field fly-ball tendencies.

It’s looking like Jason Heyward’s sixth swing change in four years wasn’t the magic elixir to fix his struggling bat. After a torrid start to the season, Heyward’s rate stats and xStats look identical or worse than his 2017 and 2018 readings. Who could have seen that coming? 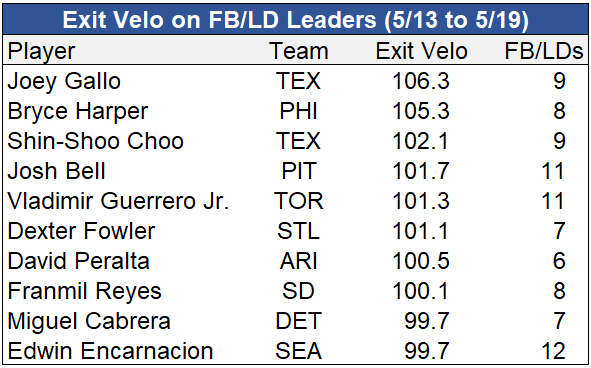 Joey Gallo continues putting balls into orbit at NASA-level speeds. His average exit velocity on fly balls and line drives this season is 102.5 mph, nearly two mph higher than second-place Gary Sanchez and three over third-place Yelich. While Gallo still whiffs at over 40% of the pitches he swings at, he’s propelled his batted-ball authority to an unprecedented tier in the Statcast era.

Is there a more underrated player than Gallo’s teammate Shin-Soo Choo? Always Mr. Dependable, Choo was the player you drafted if you wanted to lock in 20+ home runs to go along with a .350+ on-base percentage. Now, at 36, he is in the midst of a career season, with a .531 slugging percentage and 141 wRC+. I’m buying in considering that his 54% hard-hit rate on Statcast is in the 97th percentile and well above his reading from previous seasons.

A bit lost in the shuffle in a surprisingly prolific Mariners offense, as well as the sea of power-hitting first basemen breakouts in fantasy this year, Edwin Encarnacion is quietly on pace for 42 home runs and 110 RBIs. Supported by a .388 xwOBA and 17.9% strikeout rate, he is teasing box-score and xStat figures reminiscent of his days in a Blue Jays uniform. Rendon firmly addressed any concerns that his elbow would be a lingering issue last week, smacking six extra-base hits supported by five barrels. This is the season that he firmly entrenches himself as a top-five hitter in baseball.

Although his counting figures are subdued by the moribund offense surrounding him, Baltimore’s Trey Mancini is in the midst of a breakout. Based on a dramatic reduction in ground balls, from 55.5% in 2018 to 36.9% in 2019 (according to Baseball Savant), Mancini’s xSLG is at a career-high .539 and mostly supportive of his .560 actual reading. Here’s hoping that Baltimore does what’s best for Mancini, as well as fantasy owners, by trading him at the deadline.

How to Evaluate Rookies & Prospects in Fantasy Baseball