Another week in the books means another round of Statcast Risers and Fallers! Let’s jump in! 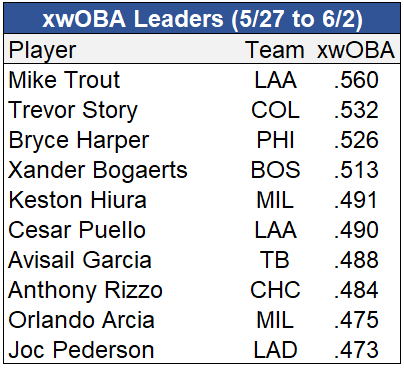 Believe it or not, this is the first week that Mike Trout has placed in the weekly xwOBA top 10. But a lack of elite weekly performances hasn’t stopped baseball’s best player from churning out consistently great ones. His .473 xwOBA on the season is the highest of his Statcast career to date, while his .324 xBA and .643 xSLG are also high watermarks.

Bryce Harper quieted his critics last week, scoring seven extra-base hits and a 1.292 OPS over six games. Meanwhile, his .526 xwOBA on the week boosted his season-long figure up to a robust .373. Harper has adopted a more aggressive approach at the plate, trading increased whiffs and strikeouts for more barrels and extra-base hits. As the summer air warms Harper seems poised to inflict major damage on baseballs, converting some of the 19 doubles he has to date to home runs. Enjoy the ride.

The Brewers’ top prospect, Keston Hiura, has taken the majors by storm, collecting five home runs and a .531 slugging percentage over his first 17 games. The right-handed hitting Hiura owns an elite hit tool capable of spraying lasers to all parts of the field. Unfortunately, a 27% strikeout rate in Triple-A combined with a 33% MLB showing points to underlying contact issues that could make his success difficult to sustain. Hiura’s 42% whiff rate on fastballs, double the league average, is the most concerning aspect of his profile. Owners in re-draft leagues should see what they can get for him.

I know what you’re thinking — who is Cesar Puello? The 28-year-old spent 10 seasons in the minors playing for six different organizations. After stringing together some strong performances in recent seasons, Puello seems to have earned an opportunity with the Angels in left field with Justin Upton still sidelined. Puello was a consistent power-speed threat in the minors and owns elite sprint speed, according to Statcast. Don’t rush to pick him up yet, but if he continues hitting well, grab him for some 20-20 upside.

Always somewhat of a Statcast darling after posting three straight seasons of a 90+ MPH exit velocity and a 40% hard-hit rate, Avisail Garcia has taken things to the next level in 2019. His .575 xSLG and .397 xwOBA are both career highs and rest is in the 95th percentile of MLB hitters. For the cherry on top, Garcia’s sprint speed slots in the 89th percentile of players and is a big reason behind his six steals on the season. Garcia is currently nursing a minor hamstring injury and is only owned in 23% of ESPN leagues. Pick him up as soon as he gets healthy. 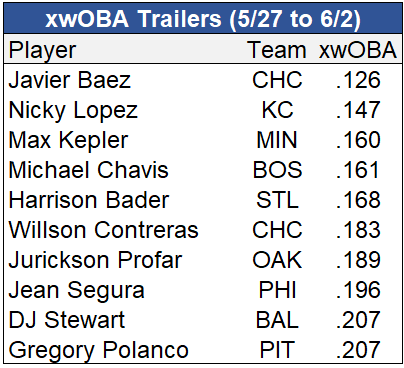 After a scorching hot start to the year, Javier Baez finally faltered last week, only managing two singles in 22 plate appearances to go along with a 45% strikeout rate. Baez’s free-swinging ways continue to be a source of consternation for some, with his whiff rate climbing all the way up to 38% in 2019. However, Baez owns elite bat control that gives him the ability to hit any pitch — inside or outside the strike zone — out of the ballpark. The more concerning aspect to Baez’s play this season is a lack of steals, as he’s on pace for a meager six after posting 21 last season.

One week after topping the xwOBA leaderboard with the third-highest weekly measurement of the season, Max Kepler finds himself in the xwOBA doghouse. Such is baseball. Kepler’s approach, one that is predicated on hitting pulled fly balls, will leave him prone to bouts of inconsistency. He is also still better against righties than lefties. While Kepler is a great player to have on your fantasy squad, make sure you sit him during slumps or against same-handed pitchers.

Michael Chavis has taken the baseball world by storm with 10 home runs and 28 RBIs in 38 games since his late April call-up. However, some cracks in the hull are starting to show, as Chavis has featured in the weekly xwOBA trailers list in two of the past four weeks. Chavis’ 37% whiff rate combined with average exit velocity and hard-hit rate marks that are merely average will create some difficulties for him going forward.

Willson Contreras is one of the more enigmatic hitters in the game. After posting a rough .390 SLG showing last year, he opened 2019 with guns blazing. But while his 12 home runs and .944 OPS on the year are impressive, he has been the beneficiary of some fortunate luck, outperforming his xwOBA by 36 points (.399 wOBA versus .363 xwOBA). Given the dearth of solid catcher options out there, Contreras holders will be happy to hold him through his slumps. Just don’t expect a repeat of his April performance going forward. 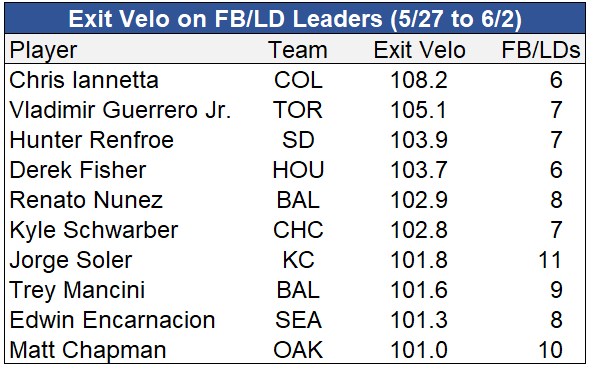 They say you can’t teach an old dog new tricks. Chris Iannetta disagrees. At 36, the righty-hitting catcher has made his approach significantly more aggressive, increasing his whiff rate into the high 30% range while more than doubling his barrel rate from previous seasons. The net result is more strikeouts to go along with significantly more balls in the air and hard contact. That’s a beneficial trade-off when playing half your games in Coors Field. Iannetta’s ownership rests at a measly 1% in both ESPN and Yahoo leagues. Those starved for catcher production could do a lot worse.

Hunter Renfroe is having himself an interesting season. He has a god-like 17 home runs and .636 SLG, however, his xwOBA trails his wOBA by nearly 70 points. Moreover, he has 27 extra-base hits on the year, but only 14 barrels. What’s going on here?

Well, Renfroe is pulling his fly balls at a 65% rate while the MLB average is approximately 23%. Pulled fly balls lead to an overperformance in xStats. However, I’m not sure his tactics are sustainable, as pitchers will adapt to his approach and feed him more pitches that are difficult to pull. 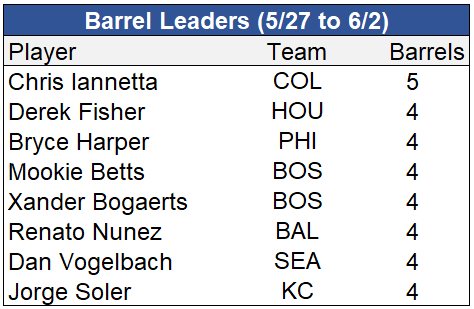 After thoroughly decimating MLB pitching last season with a .346 batting average and 1.078 OPS, Mookie Betts has taken a significant step back in 2019. Although still productive, Betts’ box score figures and xStats have all regressed to 2016-17 levels. The good news is that Betts is still an extremely valuable fantasy player, regardless, and is a good bet to eclipse 25 home runs and 20 steals on the year while compiling 200 Rs+RBIs.

What is the Right Amount of Risk to Absorb on Draft Day? (Fantasy Baseball)