Another week in the books means another round of Statcast Risers and Fallers. Let’s jump in! 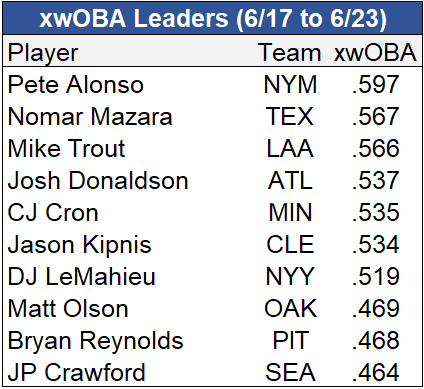 While some might have thought the 33-year-old’s best days are behind him, Josh Donaldson owns the highest barrel rate (14.8%) and average exit velocity (92.8 mph) of his career — Statcast started tracking this data in 2015 — this season. Those levels have propelled him to his second straight week in the xwOBA top 10 to go along with seven home runs over his last 14 games. While Donaldson is still operating a tick below his 2014-17 self due to a whiff rate that has inched up in recent years, his proclivity for hard contact is keeping him fantasy relevant into his mid-30s.

Formerly an interesting fantasy commodity due to a tantalizing mix of power and speed, injuries and age have sapped Jason Kipnis’ production over the last several seasons. His 2019 batting line of .248/.305/.387 keeps with that theme on the surface but is obscuring a fairly impressive xStats performance. Kipnis’ xBA on the year rests at .287 while his xwOBA comes in at an above-average .343. That xwOBA goes all the way up to .378 when you isolate his appearances against right-handed pitching. If you’re in a deep league and need some future batting average support, give Kipnis a whirl or pick him up for a weekly stream when the Indians face a heavy righty slate.

I wonder if it’s time to take Bryan Reynolds seriously. The Pirates outfielder owns a .362/.418/.564 slash in the majors in addition to some killer stats in Triple-A to start the year. Reynolds won’t win you many power categories given his 4.8% barrel rate. However, his heavy line-drive approach will ensure his batting average remains above .300. Reynolds reminds me a lot of Mets utility man Jeff McNeil, as both followed unexpected minor league breakouts with Tony Gwynn-like MLB debuts. Reynolds leads the MLB in the percentage of batted balls that end up as flares/burners, a batted ball type that owns a .655 average league-wide in 2019.

If you look up “post-hype prospect” in the dictionary, you’re likely to see J.P. Crawford’s face. A 2013 first-round pick by the Phillies, Crawford spent several years as a top-20 prospect before largely flaming out in the upper minors and MLB. But he’s quietly turned things around in Seattle this year, following up a solid Triple-A showing with a 131 wRC+ in 119 MLB plate appearances. His xStats say the performance is legit, with a .357 xwOBA that tracks closely to a .359 wOBA. Crawford seems to have made a more concerted effort to spray the ball around the field, as his 38.0% line drive rate ranks second in baseball behind Cody Bellinger. While his base-stealing ability seems to have declined in recent years, owners in dynasty leagues or those in need of batting-average help should give him a look. 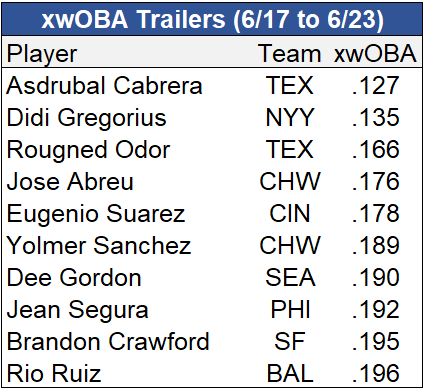 At first blush, Asdrubal Cabrera’s 11 home runs and 43 RBIs look pretty solid for someone with position eligibility all over the infield. But upon further inspection, his .231 AVG and .721 OPS reveal a player striking out more and struggling to make hard contact. I suspect Cabrera might be nursing an injury, evidenced by a much more passive approach at the plate. His zone swing rate has declined from 70.7% to 63.8% year-over-year while his swing rate on “meatball” pitches has declined from 84% to 66.2%. Joey Gallo’s return from injury will create quite a logjam for at-bats in Texas. Don’t be surprised if Cabrera starts riding the pine.

Didi Gregorius has been terrible since his return from Tommy John surgery early this month, posting a .315 SLG and .271 xSLG in his 56 plate appearances. Despite these issues, he is still owned in over 50% of fantasy leagues, likely due to his place in a strong Yankees lineup. If owners have the roster flexibility to stash Gregorius until he figures things out then, by all means, hold him. However, don’t hesitate to move on given that he will likely have some growing pains in his return from a year-long absence.

Eugenio Suarez, despite strong showings in home runs (16) and RBIs (45), has largely been a disappointment this year. After posting a sterling .892 OPS in 2018, he is all the way down to .795 in 2019. The primary culprit? A higher strikeout rate to go along with significantly deteriorating batted-ball quality. I suspect Suarez’s issues are related to an increased fascination with pulling the ball, as his pull rate on flies and liners has gone up from 31% in 2018 to 43% in 2019. While this change is allowing Suarez to track last year’s home run pace, it’s also resulted in a doubling in his pop-up rate and a decreased ability to hit breaking pitches. Unfortunately, the most that Suarez’s investors can do is hold on and hope he improves in the second half. 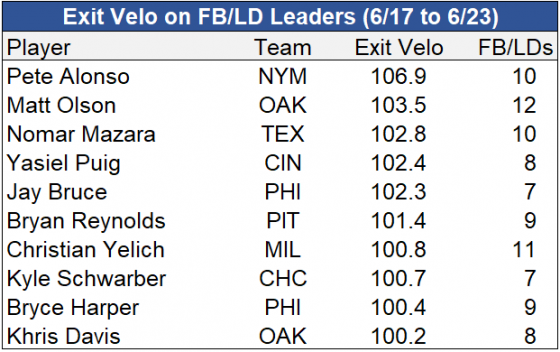 What else can we say about Pete Alonso’s rookie campaign? The Mets slugger is on pace for 55 home runs and 125 RBIs and has xStats to match, placing in the 95th+ percentile in barrel rate, xSLG, and xwOBA. Alonso owns the hardest-hit ball of the 2019 season, registering an April 11 home run at a blistering 118.3 mph. Unlike most young sluggers, he isn’t just doing his damage on fastballs, evidenced by a 92.3 mph exit velocity on breakers and 91.2 mph on offspeed pitches. Enjoy the ride!

Kudos to the Yaisel Puig managers who stuck through a largely brutal start to the season. Your patience is starting to pay off. Puig’s batting average (.237) and slugging rate (.456) are finally inching backing to historical norms. Meanwhile, his boxcar production remains quite impressive, as he is on pace for 34 homers and 23 steals. Given Puig’s elevated whiff and pop-up rates in 2019, it certainly seems like the pressure of being on a new team caused him to press to start the year. Luckily he’s out of the woods and poised to provide impressive production in the second half. 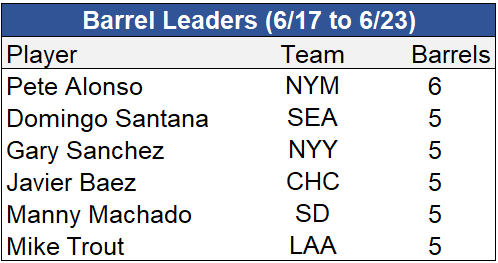 If there was a Comeback Fantasy Player of the Year award, Seattle’s Domingo Santana would certainly be an early front-runner. After a miserable 2018, the 26-year-old outfielder is sporting career highs in wRC+, wOBA, barrel rate, and xSLG in 2019. The secret to Santana’s success is a pristine batted profile that features a bevy of line drives and barrels to all fields with few pop-ups. While the helium surrounding Santana might die down as Seattle embarks on a midseason tear down, enterprising fantasy owners should see if they can acquire him for below-market value.