Yasiel Puig has been on a tear for the past month.

Welcome back to the fantasy baseball weekly risers and fallers series. Since most teams have only played three games since the All-Star break, I’ll examine the last two or three weeks to find the hottest hitters and pitchers you should look to acquire before your league’s trade deadline. On the flip side, you may want to try and dispose of the fallers I discuss before their value drops even more. Let’s get to it!

Nate Lowe (1B – TB)
The young slugging first baseman is back up after an abbreviated stint in early May. The Rays called up Lowe after losing Ji-Man Choi, but Choi is back off the IL and Lowe remains on the roster. Since recalled on the Fourth of July, he’s hitting .345 with five home runs and 10 RBIs in just eight games. It’s a small sample, but he’s currently rocking a 19.6% barrel rate with a 50% hard-hit rate. He’s been crushing the ball in the air, as his ground-ball rate is just 28.3% compared the league-average 45.5%. In addition to his elevated quality of contact, he’s also spraying balls to all fields, including four of his homers going the opposite way. 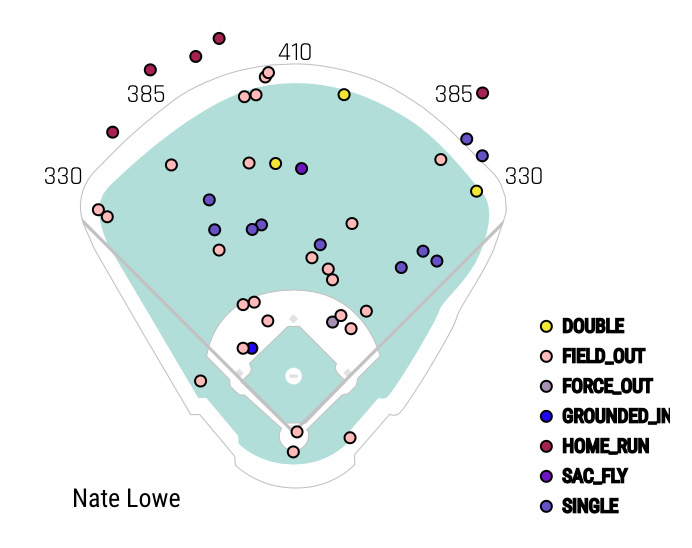 While an elevated fly-ball rate will likely lower his batting average, his all-fields approach should limit infield shifts going forward. Given the current properties of the ball, Lowe should provide value in terms of power, run production, and a solid batting-average floor in the second half.

Yasiel Puig (OF – CIN)
Well, this is embarrassing. Back in Week 11, I discussed Puig in the fallers section, and since then he’s been on fire. To be fair, I discussed how Puig is a streaky hitter and could flip the switch at any time. I actually labeled him as a buy low, but only if he could be acquired at a discount. Over the last two weeks, Puigs has four home runs, two steals, and just two strikeouts in 33 plate appearances.

My previous concern with Puig was his poor contact rates. Since June 15, he has only a 12.2% strikeout rate thanks to a more aggressive approach that has him swinging at over 55% of the pitches he’s seen. His combined 14 home runs and stolen bases (10 HR + four SB) is the most in the majors in that timeframe. If you acquired Puig at a discount or stuck it out, you’re loving this stretch. Keep in mind that his aggressive adjustment could lead to some slumps, but he’s on pace for more than 35 homers and 23 steals.

Evan Longoria (3B – SF)
No, the former AL All-Star did not retire. He’s just going about his business on the west coast. Over the last two weeks, Longoria is hitting .400 with six home runs, 12 RBIs, and an incredible .600 wOBA. I wrote about Longoria this offseason as a bargain in deep leagues, as he was going just inside of pick 400 in March drafts. While his overall numbers won’t get fantasy owners running to the waiver wire, now is the time to grab him in 14-team leagues. He should even get a look in 12-teamers.

Longoria is currently owned in just 20% of ESPN/Yahoo leagues but has underperformed his .366 xwOBA with just a .326 wOBA. His xwOBA slots him right in between Red Sox studs Xander Bogaerts and Rafael Devers. Not a bad place to be. Now, xwOBA does not include park factors, and Oracle Park is a poor hitter’s park. However, it’s far worse for left-handed power, so I’d look to jump on Longoria if you need depth at the hot corner.

Note: Longoria exited Sunday’s game due to plantar fasciitis and will undergo an MRI on Monday. Hopefully, he doesn’t hit the IL. Continue to monitor this news before making a move.

Madison Bumgarner (SP – SF)
Mad Bum has two wins with a 1.80 ERA and 27 strikeouts in his last four outings. I was down on Bumgarner coming into the season and based on his performance prior to the All-Star break, I was relatively spot on. My concerns were largely due to his diminished velocity and a likely trade. He’s been aided by Oracle Park, which suppresses home runs. So far this year, his 1.30 HR/9 rate would be the second-highest of his career behind 2017’s 1.38. Of course, his home park will be a downgrade wherever he is traded, but pitching for a contender will improve his ability to earn wins. With just five victories on the season, that’s an even trade in my opinion.

In addition, his velocity is up almost one mile per hour, and the command of his pitches has improved. We can expect Bumgarner to maintain his ratios going forward with more than a strikeout per inning while receiving a boost in wins in the second half.

Felix Pena (SP – LAA)
Pena has been deployed after an opener for most of the season, and it’s been fantastic for his fantasy value except, of course, for quality-start leagues. He’s managed to grab two wins with a 2.81 ERA and 18 strikeouts in his last three outings without starting a game. He’s owned in only five percent of leagues and recently threw a combined no-hitter with Taylor Cole against the Mariners. Pena did most of the heavy lifting, going seven innings to finish the game.

Pena does not have elite stuff, but his slider is a putaway pitch that he’s utilizing more this year. The depth of his arsenal limits him to only go through lineups twice, which is why he’s succeeding as the long man following an opener. Throwing his slider more has helped increase his swinging-strike rate (SwStr%) by three percent. In addition, batters have hit just .137 off his slider with a .491 OPS. His sinker and changeup are average at best, but that’s enough to keep hitters off-balance given those three velocity bands. Pena should continue to receive opportunities to earn wins while striking out around a batter per inning. He’s a solid option at the back end of your pitching staff.

Trey Mancini (1B/OF – BAL)
This one pains me, but Mancini’s struggles the week prior to the break have carried over into the second half. Over the last two weeks, he’s hitting a paltry .091 (3-for-33) with no home runs or RBI and 10 strikeouts. After looking like a clear breakout candidate through the first two-and-a-half months, something’s been off with the Orioles slugger. Let’s take a look at his rolling average graph. 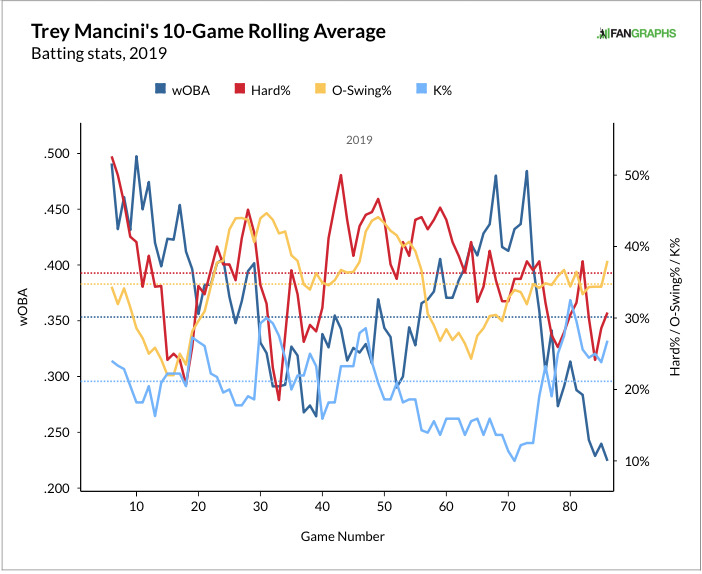 After a great stretch through June, Mancini has completely fallen off the map. He’s typically a consistent hitter, so one has to wonder why he’s endured a sharp dropoff. It could be an injury, but I don’t believe that’s the case. We would have seen a steep decline in hard contact where the graph shows a steady decline. If he continues to expand the zone and strike out at near 30%, he’s going to struggle to hit for average. I’m not giving up on him just yet, but the recent trends are concerning.

Willy Adames (2B/SS – TB)
Any time a hitter strikes out 19 times over the course of 11 games without drawing a walk, I get a little concerned. Adames has done just that while hitting .133 with zero home runs. Still just 23 years old, he was a popular sleeper coming into the season. He’s improved in terms of power, hitting 10 home runs prior to July, but the elevated BABIP from 2018 has come back down to earth this season. His expected metrics agree with his current production, and I believe at this point that Adames is a .235-.245 hitter.

With three steals on four attempts, it seems unlikely he will reach double-digit stolen bases. Given the depth of power in the game today, Adames doesn’t move the needle this season. I’d leave him on waivers in all leagues of 14 teams and shallower. He’s talented but needs to improve his approach to blossom into a fantasy asset.

Chris Sale (SP – BOS)
After a disastrous April, Sale transformed back into the ace we’ve known over the last five-plus years. However, over his last four starts, he’s given up 18 earned runs (including six home runs) in just 21.1 innings pitched. The strikeouts are still there and walks have not been an issue. On the season, his ERA sits at 4.27, which would be a career-high by nearly one run! Now, Sale isn’t a 4.27 ERA pitcher, not even in this “juiced ball” era. But over the last four games, he has basically become a two-pitch pitcher. He’s throwing his four-seam fastball and slider nearly 93% of the time, and I’m worried about Sale’s ability to maintain 94 mph on his fastball going forward.

Diving into Sale’s pitch splits, we can see that his four-seam fastball is a dominant pitch. While he’s still getting whiffs at a high clip, hitters are slugging .466 this year compared to just .321 in 2018. Similarly, his slider is getting hit harder as well, and the strikeout rate is down nearly 10%. Based on the expected statistics at Baseball Savant, Sale is still a top-20 pitcher in terms of limiting the quality of contact with a .287 xwOBA compared to his .302 wOBA. We need to adjust our expectations for Sale given the home run increase, but he is also getting hurt by an inflated BABIP. Although the BABIP will normalize, home runs will continue to be an issue (albeit a small one). I’d buy Sale low, but don’t expect the elite ratios we’ve seen the last couple of seasons.