Keke Coutee: A Player on the Rise (2019 Fantasy Football)

Should fantasy owners be concerned about how many targets Keke Coutee might recieve?

In the first start of his NFL career, Keke Coutee announced his arrival loudly. In Week 4 of the NFL season, Coutee debuted with 11 receptions on 15 (!) targets for 109 yards. He went on to bookend the start of his season with another 11-reception game on 14 targets and 110 yards in the Texans’ playoff loss to the Indianapolis Colts.

In just six games he was targeted 41 times, which ranked fourth on the Texans last year. Yes, he played just six games and saw the fourth-most targets on the team. His 6.83 targets per game would have led to 109 targets over a full 16 games. Looking at only the five games he played in full (he aggravated an ongoing hamstring injury in Week 11 against the Titans), his average targets would have been 7.8 per game.

Coutee’s dynasty ADP of WR42 is way too low based on what he showed last season. Many owners are likely scared off by the hamstring issues that cost him 10 full games and most of another game in 2018. Coutee’s hamstring problems started last preseason, lingered all year, and caused him to miss the first three weeks of the season.

Soft tissue injuries are something that should concern you. But Coutee did play in 25 of 25 games during his final two college seasons, so it’s not as if he has a history of hamstring injuries. Texans head coach Bill O’Brien attributed much of Coutee’s hamstring issues to preparing for the NFL combine as opposed to training for football last year. All offseason reports indicate that Coutee is fully healthy heading into this season.

If it’s not the injury concerns, perhaps fantasy owners are scared off by the specter of Will Fuller. Coutee had much more of a negative impact on Fuller than vice versa. Using FFStatistics’ splits tool, we can see that borne out in the four games they played together. 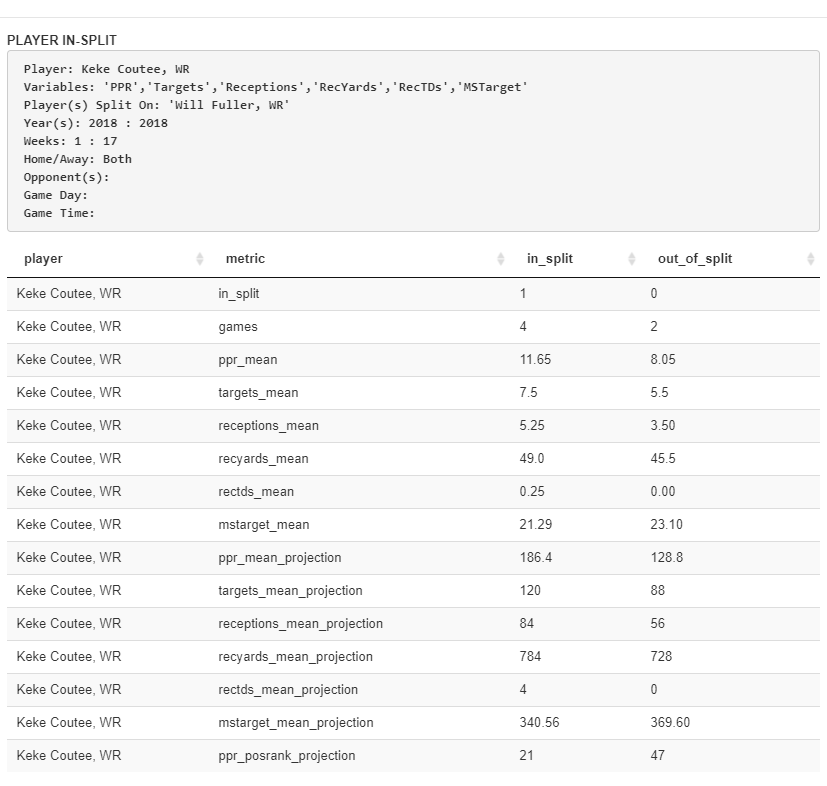 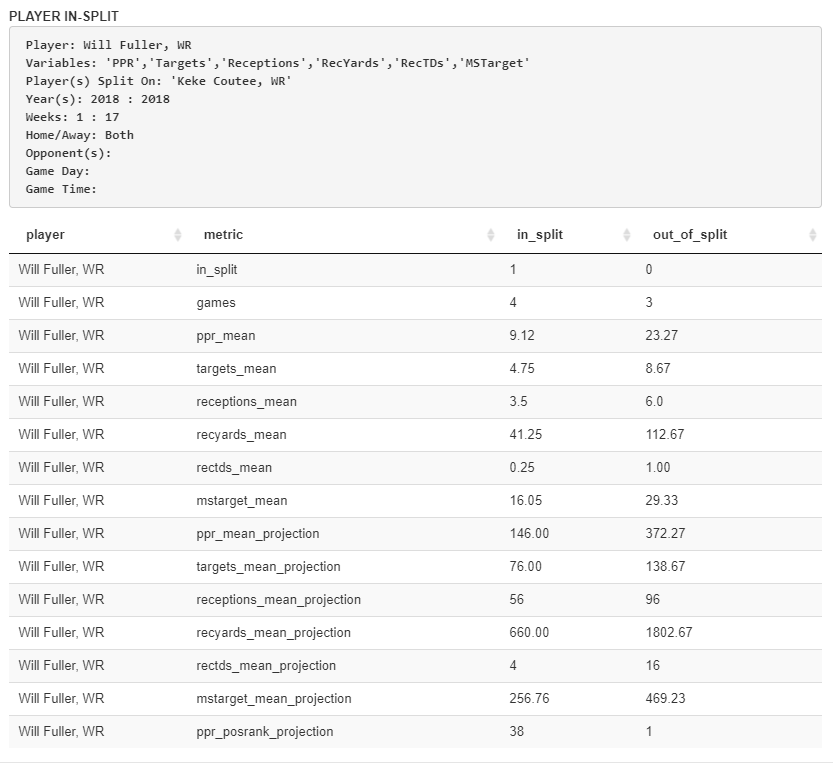 Coutee saw two more targets per game and averaged 1.75 more receptions per game while upping his fantasy scoring by 3.60 points per game when playing with Fuller. The sample size is admittedly small, but the evidence we have indicates that Fuller is not a threat to Coutee.

There might be a concern that Coutee is simply a target monster that won’t be able to produce if his target share decreases. Of receivers with 41 targets or more (Coutee’s target total), Coutee ranked 95th with a minuscule aDOT of 5.1, per AirYards.com. His 10.25 yards per reception ranked 99th in the league last year. Producing despite a low aDOT is something Coutee is accustomed to going back to his days at Texas Tech. Per PFF’s Scott Barrett:

While he was able to excel on short routes in college racking up tons of YAC, he also excelled on deep routes, again per PFF.

“PFF College credited Coutee with 37.9% of his 2017 receiving yards on passes thrown 20-plus yards downfield and the second-highest passer rating when targeted among draft-eligible receivers.”

He ran a blazing 4.43 at the NFL Combine, which is good enough to place him in the 91st percentile. He averaged 15.2 yards per reception in college on a significant sample size of 159 receptions. His final two seasons in college also showed his nose for the end zone, with 17 touchdowns over those last two seasons.

Even if Coutee weren’t a speed/YAC freak, any concerns over targets are likely overblown. The Texans have primarily concentrated their targets to their wide receivers during Bill O’Brien’s coaching tenure. Lamar Miller has averaged just 39 targets in his three seasons with the Texans, and there are no tight ends of note to worry about. The Texans showed everyone how they intend to use Coutee in his first and last game of the 2018 season. At his current price, he’s a player I’m targeting in every startup draft and attempting to trade for in each of my existing leagues.

Check out all of our player profiles >>

Round 10 Sleepers and Busts (2020 Fantasy Football)