Despite hitting 24 home runs, Franmil Reyes has yet to reach his full potential.

We’re back for another iteration of Statcast Risers & Fallers! Let’s dig into how hitters fared in Week 14. 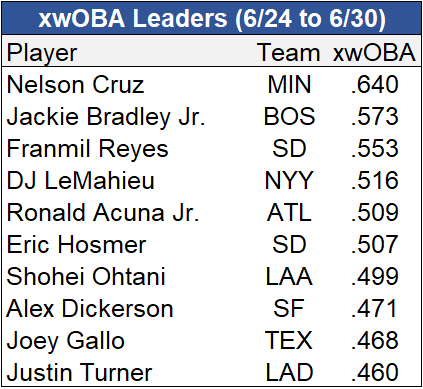 Don’t look now, but arguably the streakiest hitter in baseball, Jackie Bradley Jr., is heating up. Bradley owned a .992 OPS in June after posting a deplorable .612 mark over the season’s first two months. Much was made of a swing change in the middle of 2018 that led to some impressive Statcast figures (50% hard-hit rate, 96th percentile). However, he hasn’t been able to carry over those improvements into 2019. In spite of his .573 xwOBA on the week, Bradley’s Statcast readings are all dramatically lower than last season. While I wouldn’t be surprised if he reels off another four weeks of impressive numbers, I’d take my chances with a higher upside play like the Tigers’ JaCoby Jones instead.

Hunter Renfroe stole the show in June, but Franmil Reyes is the true top dog in San Diego’s outfield. After smacking four bombs last week, Reyes now has 24 on the year. Statcast thinks the power display is real, with Reyes posting 90th+ percentile showings in barrel rate, average exit velocity, xwOBAcon, and hard-hit rate. Unfortunately, his overall batting line has been held down by a meager .245 BABIP that should be trending in the .300s given the strength of his batted-ball metrics. Don’t be surprised if Reyes goes on an absolute tear in the second half and finishes the season with 45 home runs and an OPS north of .900.

Eric Hosmer, replete with a sky-high ground-ball rate and a reliance on batted luck to turn in good fantasy seasons, is often a whipping boy of the sabermetric community. But he deserves credit where credit is due; he’s currently on pace for a sparkling line of 93 runs, 25 homers, and 116 RBIs to go along with a .299 batting average. Moreover, all of his xStats have improved markedly since last season, as Hosmer is posting the highest hard-hit rate of his career in 2019 (46%). When he’s on, he’s one of baseball’s best pure hitters, capable of spraying the ball all around the field for extra bases. He won’t ever be worth the contract he signed with San Diego, but he’s certainly making fantasy owners a hefty profit this year.

Sleeper alert! Those in deep leagues should pick up Giants outfielder Alex Dickerson right now. He posted an impressive rookie campaign with the Padres in 2016, backed by a 111 wRC+, but was sidelined for the next two years due to back issues and a torn UCL. He nursed himself back to health in 2019 and posted some impressive numbers for the Padres’ Triple-A affiliate before getting traded to the Giants in June due to San Diego’s outfield logjam. Since then, Dickerson has been a regular in the Giants’ lineup against righties while working as a pinch hitter when a lefty starts. His .352 wOBA is supported by a .351 xwOBA, highlighted by an impressive 53% hard-hit rate. While those figures come in a very small sample size, Dickerson’s impressive minor league resume and 2016 MLB showing indicate a solid performance baseline. Grab him now. After showing significant promise to open the season, Tigers utility man Niko Goodrum has sputtered as of late. While the switch-hitter is on pace for 80 runs to go along with 26 homers and steals combined, his .234 AVG and .311 OBP are killers to a fantasy team’s offensive rate stats. Goodrum is hitting the ball better in 2019 — his average exit velocity increased from 87.7 to 89.2 mph while he’s swapped some ground balls for line drives. Ultimately, his issue is that he whiffs and strikes out at rates on par with 35-home-run hitters despite being a 15-home-run guy. That’s the fundamental reason his batting average is in the .230s, and it’s not a sustainable combination for his fantasy value. His multi-position eligibility and speed are attractive, so monitor Goodrum for improvements in his contact ability.

It’s been a tale of two seasons for Paul DeJong. Through May 15 he owned a .962 OPS and 151+ wRC+, figures that have declined to a morbid .622 and 62 from May 16 onward. He has made a concerted effort to make more contact in 2019, cutting his whiff rate to 23% and strikeout rate to 19%. The downside to that change is weaker batted-ball authority, with DeJong’s barrel rate, xwOBAcon, and hard-hit rate plummeting from previous levels. But there is still a lot of potential in the shortstop’s bat, and owners would have likely been happy with a 100-R, 25-HR, 10-SB pace when they drafted him in March. Exercise patience and wait for DeJong and the Cardinals to turn things around in the second half.

David Dahl had an interesting week. Despite posting the seventh-lowest xwOBA in baseball, he managed to accumulate four homers, 14 RBIs, and a .815 slugging percentage. Hats off to Coors Field! But seriously, Dahl has been one of Colorado’s most impressive hitters this season, posting a higher xwOBA than Nolan Arenado and a beautiful .317/.362/.552 triple slash line. Perhaps it’s time we recognize Dahl as one of the game’s best hitters. After all, his career batting average tracks above .300 with an impressive .879 OPS. Shohei Ohtani is insanely talented. In addition to possessing one of baseball’s best live arms, he also profiles as one of baseball’s best hitters. His 104.7 average exit velocity on flies and liners last week has become par for the course for a player who has been one of the MLB’s best power hitters since his 2018 debut. Consider that in 561 career PAs (still less than one full season), Ohtani has smacked 34 home runs and 96 RBIs. Or that, in the same span, his average exit velocity is 93.0 mph and barrel rate is 15.3%. Ohtani legitimately looks like a crazy amalgamation of Nelson Cruz and Max Scherzer. Keeper league owners need to hold on tight.

One year ago, it looked like former Mets top prospect Dominic Smith was on his way out after a putrid performance in Triple-A. However, he looks to have revived his career in 2019, posting a video-game like 1.009 OPS with the Mets this season, buoyed by four home runs last week. Smith seems to have found everyday at-bats in left field in Brandon Nimmo’s absence and is running with the opportunity. While he has certainly been graced by the hand of lady luck so far (.390 BABIP, .429 xwOBA vs. a .356 xwOBA), his ability to hit the ball with power to left and center indicates a sustainable power skill set.