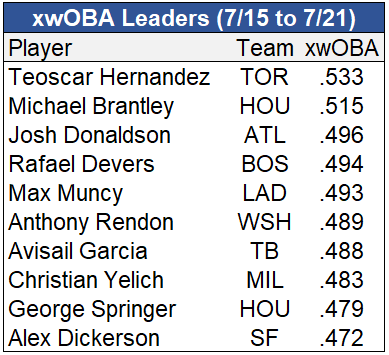 After a breakout Statcast performance in early 2018, Toronto outfielder Teoscar Hernandez has been relatively quiet over the last year. But the free-swinging righty turned things around in a big way last week, smacking four homers and a double in 24 plate appearances. While Hernandez’s .533 xwOBA indicates he earned every bit of that production, he is still the same feast-or-famine player he’s always been. His whiff rate is hovering at an obscene 35% over the last several weeks. While a high whiff rate isn’t bad in and of itself, Hernandez’s current 9.3% barrel rate needs to be higher in order to justify the swings and misses. Hold off before buying into the breakout.

Who would have thought that Boston’s 2019 MVP would be Rafael Devers instead of Mookie Betts or J.D. Martinez? Devers struggled mightily at times in 2018, but his progression this season as a 22-year-old is a lesson in practicing patience for young players. However, owners should be ready for a pull-back in production. First off, Devers is outperforming his xStats quite considerably given his .566 SLG versus .527 xSLG. Moreover, he is likely to get shifted considerably more, as his ground balls have come increasingly to the pull side. Re-draft leagues owners who have a good offer on the table for Devers should think about pulling the trigger.

After struggling for a month, Rays outfielder Avisail Garcia is once again finding his rhythm at the plate. Luckily for astute fantasy owners, the improvements haven’t shown up in the box score yet. Garcia, despite hitting to a .488 xwOBA last week, only had one home run and two RBIs. With Kevin Kiermaier hitting the IL, Garcia seems poised to take a majority of the reps in center field, which will likely earn him eligibility there in most fantasy leagues. Given his strong Statcast metrics, power-speed combo, and potential positional flexibility, Garcia presents an interesting pickup for fantasy owners down the home stretch.

This is the second time in a month that Giants outfielder Alex Dickerson has graced the top 10 xwOBA board. The July 2nd iteration of Statcast Risers and Fallers encouraged fantasy owners to pick Dickerson up immediately. Since then he’s hit to a .425/.489/.850 triple slash and maintained an xwOBA close to .400. He combines the ability to hit the ball solidly to all parts of the field with decent whiff rates and strikeout avoidance. Despite his continued breakout, Dickerson is still owned in only 8% of ESPN and Yahoo. Once again: go grab him! 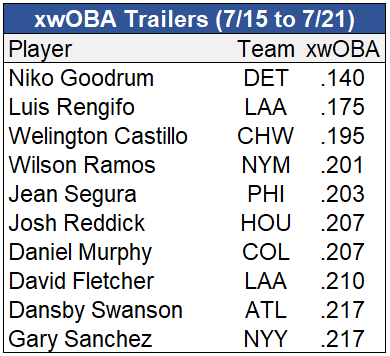 Josh Reddick has had a tough go of it lately, slashing .200/.274/.255 in July with no home runs and a 47 wRC+. In spite of his struggles, he has been a near everyday presence in either right or left field for Houston. One has to wonder how much longer the Astros will trot out Reddick when they have a top-five prospect in Kyle Tucker closing in on his 800th Triple-A at-bat. Tucker has been taking reps at first base to make his glove more versatile upon his inevitable promotion, but I suspect he will nudge Reddick out of the lineup when he gets the call.

One has to be careful of overinterpreting Statcast numbers for Rockies players, who are near guarantees to outperform their xStats due to the favorable confines of their home ballpark. But what’s going on with Daniel Murphy this season is ridiculous. With a .286 average and a 20 HR, 100-RBI pace over a full season of at-bats, his 2019 seems to be going quite well. Meanwhile, Murphy’s xSLG, xwOBA, hard-hit rate, and xwOBAcon are each in the bottom 10th percentile of the league. The Coors effect is very real, especially in 2019, but it’s difficult for players to sustain a 66-point wOBA to xwOBA difference (.344 to .278). If anyone is biting on Murphy in your leagues, pull the trigger and get something for him.

Perhaps his struggles have slipped under the radar because his team is still doing so well, but Gary Sanchez has had a rough month. His stats since June 23 include a mere three extra-base hits in 88 plate appearances to go along with a .125 AVG and .188 SLG. In the process, his OPS has declined all the way from .973 to .821. Unfortunately, Sanchez’s approach at the place is extremely feel-based and thus feast or famine. When he’s on, most fastballs and offspeed pitches near the middle of the zone are homers. When he’s off, they’re pop-ups and grounders into the shift. Sanchez owners need to get used to the peaks and valleys. He’ll right himself soon enough. 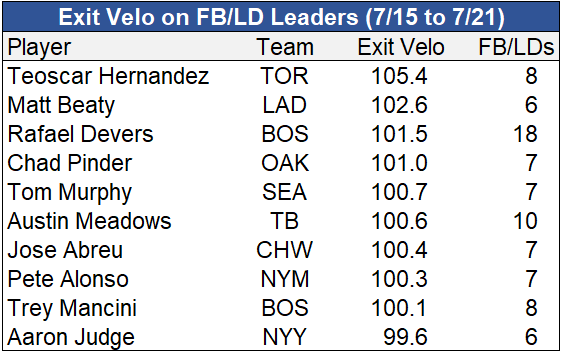 After a tough June in which he failed to hit a home run and totaled a mere six RBIs, Austin Meadows got back on track last week. His 100.6 mph EV on FB/LDs last week raised his season-long average to 95.1, which ranks above the 80th percentile in baseball. Perhaps the most impressive aspect to Meadows’ approach is his ability to put multiple swings on the ball depending on count and pitch type. He ranks in the 94th percentile since 2018 in the share of flares and burners (more weakly hit balls that have a very high expected batting average) while also ranking in the 72nd percentile in barrels. That combination is exceedingly rare and only replicated by impressive fantasy bats like Freddie Freeman, Nicholas Castellanos, David Dahl, and Domingo Santana.

Jose Abreu is in the midst of a career year from a Statcast perspective. His 15.0% barrel rate is nearly double his previous average while his 50.7% hard-hit rate is easily a career-best. Unfortunately, his 109 wRC+ is his worst showing to date. What gives? For starters, Abreu’s plate discipline is worse this year, highlighted by a 0.21 BB/K ratio that is a down from a level previously closer to 0.35. Moreover, his wOBA trails his xwOBA by 20 points, indicating that he’s been the recipient of some poor batted-ball luck. But there’s good news. Abreu’s 24.6% whiff rate is largely the same as previous years, indicating that his strikeouts should decrease in the near future. Additionally, if he continues to sting the ball, he will begin finding more hits.