Welcome back to the FanyasyPros weekly risers and fallers article. You know the deal: I discuss some of baseball’s biggest movers to help your fantasy baseball team each week. You’ll notice that Aristides Aquino is not listed in the risers section below, but that’s because I covered him last week. The man just keeps mashing! He even starting to show some patience with two walks on Sunday. OK, enough about Aquino, let’s look at some of the risers and fallers from last week.

J.T. Realmuto (C – PHI)
Realmuto finally got it going over the past week, hitting a blistering .417 with four home runs and nine RBIs. While unheralded catchers such as Mitch Garver and Roberto Perez jumped out in front of Realmuto in the first half, he’s steadily gone about his business. Per ESPN’s Player Rater, he’s ranked as the number one catcher in fantasy.

Given the depth of value at the position this season, that’s somewhat surprising. What’s not surprising is that Realmuto’s quality of contact metrics have finally caught up with his actual production. He’s currently sitting on career-highs for average exit velocity, barrel rate, and expected batting average (xBA). In addition, he’s stolen seven bases on eight attempts. That’s two more than any other catcher this season. That across-the-board production made him the top drafted catcher coming into the season. After a slow start, he’s picked up the pace and will likely maintain his spot atop the position.

Mike Yastrzemski (OF – SF)
I debated including Yastrzemski in last week’s write-up, and he made me regret it. He’s smashed five dingers in the last six games, including a three-homer game against the Diamondbacks last Friday. San Francisco’s outfielder has been on fire, and it’s not BABIP aided. His BABIP sits at just .258 over the last two weeks, which means he’s actually been unlucky.

Baseball is in his blood, as he’s the grandson of former Red Sox great Carl Yastrzemski. The late-bloomer never received much hype as a prospect, but the 28-year-old brings a balanced approach to the plate. He sprays balls all over the diamond and has shown power to all fields with four of his 16 homers going to left field, five to center, and seven to right. A fixture at the top of the Giants’ lineup over the last three weeks is still available in 73% of ESPN and Yahoo leagues, so go get him if you need a boost in power and runs.

Nick Ahmed (SS – ARI)
Ahmed is quietly having a very productive season. The 29-year-old shortstop hit .423 with four home runs, 11 RBIs, and a .488 expected weighted on-base average (xwOBA) last week. He’s tied a career-high with 16 home runs and has chipped in with seven swipes to go with 67 runs and 68 RBIs.

He’s improved his plate discipline metrics, which have helped him maintain a 2-1 K:BB ratio. Ahmed’s 80.4% contact rate is about four percent better than league average, so his batting average should remain strong. He’s available in about 76% of ESPN/Yahoo leagues and can provide value in all five categories. He’s not the most exciting player, but owners looking to replace Fernando Tatis Jr. or Andrelton Simmons should give Ahmed a look.

Eloy Jimenez (OF – CWS)
It’s been an up and down rookie campaign for Jimenez thanks to some nagging injuries, but he’s showing some impressive skills of late. Since August 10, he’s hitting .314 with four home runs and eight RBIs. Sure, those numbers don’t jump off the page, but his quality of contact and plate skills have caught my eye. His xwOBA is .485 over that span, and he’s cut his strikeout rate to just 19.4%. Let’s take a look at his hard-hit rate in the rolling average graph below. 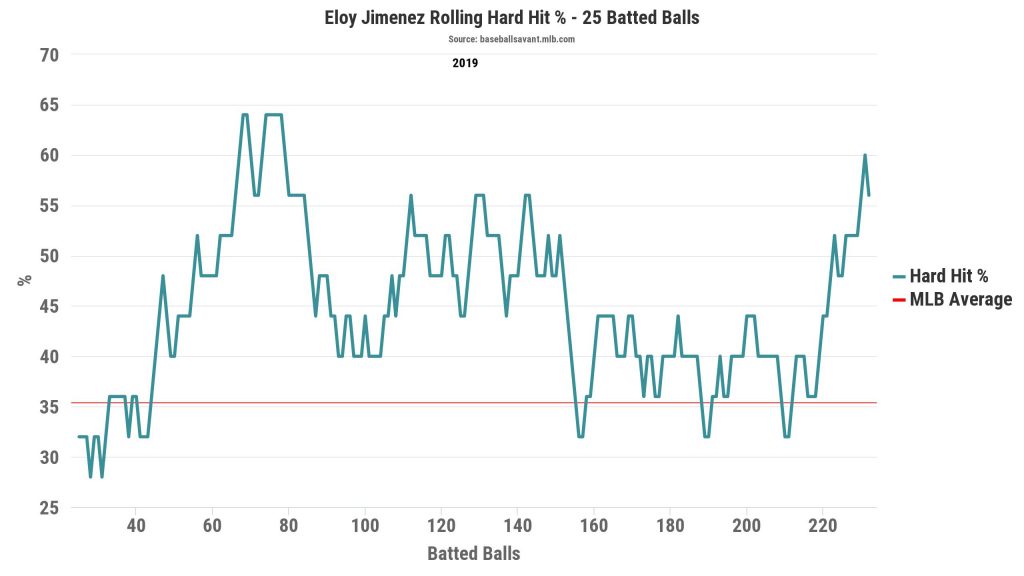 As you can see, he’s been up near the 60% hard-hit rate level a few times this season and is regularly well above-average. What he hasn’t done consistently this season, however, is provide elite quality of contact while keeping his strikeout rate in check. He’s currently in the midst of doing just that, which shows the young hitter’s maturity and development. Remember, he’s only 22 years old. Believe it or not, Jimenez is still available in 37% of ESPN/Yahoo leagues.

Ryan Yarbrough (SP/RP – TB)
Over his last two starts, Yarbrough has 18 strikeouts across 15 innings without giving up a run. Solid all season, he has recently begun piling up the strikeouts. He’s only stuck out 20.9% of batters faced in his MLB career, which is about two percent below this season’s league average. He only throws his fastball around 88-89 mph.

So, how has he punched out so many batters in recent outings? Yarbrough relies heavily on his cutter and changeup and, as a result, has generated more swings outside the zone this season. Over the last three outings, he’s throwing his cutter 40% of the time and his changeup at a 29.4% rate. His usage of each pitch has increased by five percent. Both pitches have netted elite results with weighted runs created plus (wRC+) of under 50, where league-average is 100. Yarbrough’s fourth pitch, the slider, has also generated positive results. That gives the righty three offerings with a positive Pitch Value, per FanGraphs. He won’t maintain more than 10 strikeouts per nine innings, but he should provide a ton of value going forward given the Rays’ lack of rotation depth.

Khris Davis (OF – OAK)
I covered Davis about a month ago, suggesting that he might be harboring an injury. Over the last week, his quality of contact is extremely poor, evidenced by just a .205 xwOBA. After posting four straight seasons with a wRC+ of over 120 (or at least 20% better than league average), his current wRC+ is just 78. His fly-ball rate is the lowest of his career, and his HR/FB% is the lowest it’s been since with the Brewers in 2014.

His Statcast metrics do not paint a prettier picture either. For the first time since 2015, he’s been unable to hit a ball over 110 mph. In 2018, he led all of baseball with 70 barreled balls. This season, he’s currently at 27, which ranks 82nd in all of baseball. I can’t help but think he’s still hurt. After hitting 16 opposite-field home runs last year, he’s managed to hit just two to right field in 2019. Over the last few weeks, his hard contact has rebounded a bit, but his fly-ball rate remains low for his standards. This isn’t the end of Khris Davis, but it’s looking more and more like a lost season.

Aaron Judge (OF – NYY)
Judge hit .200 with no home runs and three RBIs last week. He’s still getting on base plenty because of an elite walk rate, but fantasy owners have not received the elite numbers they are used to seeing when Judge is on the field. His Statcast metrics this year are in line with past results. The difference is his fly-ball rate. 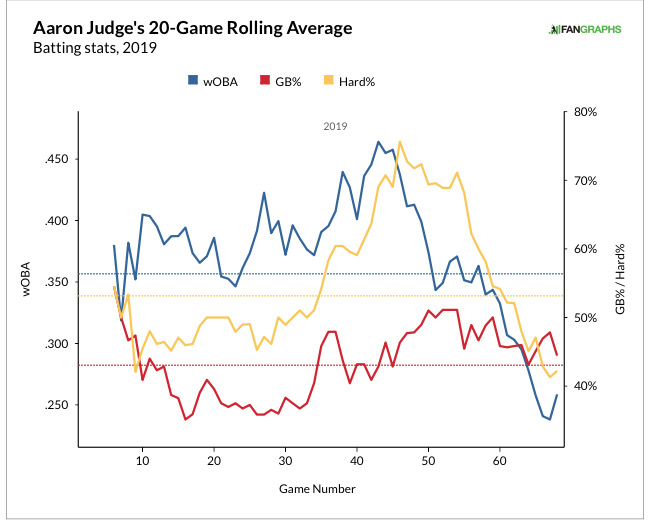 His fly-ball rate has been on a downward trend since 2017. Per Statcast, it’s down a whopping 11% since 2017. In addition, his hard contact is down over the last month. He’s still hitting a ton of line drives, but Judge’s value lies with fly balls. His career home run per fly ball rate (HR/FB%) is 31.1% which is the highest among active hitters since 2016. If he continues to hit the ball on the ground, don’t expect the gaudy numbers we are used to seeing from Judge. Let’s hope he turns it around because he’s extremely fun to watch. I would bet on Judge rebounding but can’t share the same optimism for Davis.

Albert Pujols (1B – LAA)
I essentially buried another former perennial fantasy first-rounder in Miguel Cabrera a few weeks ago, and now it’s Pujols’ turn. Sure, he’s still hitting for some power and will drive in runs because he’s fortunate to hit behind the best player in baseball in Mike Trout. Over the last six games, however, Pujols hit just .217 with no home runs.

A shell of his former self, he’s a complete drain on batting average, runs, and stolen bases. Pujols still has two years left on his deal, and he’s going to continue to sink the Angels if they continue to play him. The Angels would be wise to move on from Pujols while Trout is still in his prime. Per FanGraphs, he’s cost them -2.5 WAR over the last three seasons. We can still reminisce about when he was arguably the number one fantasy player from 2002 to 2010, but it’s time to move on.

Jose Berrios (SP – MIN)
Over his last three starts, Berrios is sporting an 8.44 ERA while giving up five home runs and eight walks. He is not going to blow hitters away with his fastball, which sits just over 93 mph. He has a great curveball that he throws 30% of the time. It’s one of the best in the game when it’s one, but unfortunately, it’s inconsistent. In addition, his average fastball velocity was down below 92 mph three out of the last four games. He ramped it up to 93 mph in his most recent outing, but this is concerning as we enter the home stretch. If his velocity continues to dwindle, the Twins may need to look at skipping him or placing him on the IL. If he pitches through it, Berrios does not have the depth in his arsenal to succeed. The ERA estimators peg him for an ERA closer to 3.90 than his current 3.37 ERA. With a below-average strikeout rate, Berrios may not provide the ace-level production he delivered in the first half.

Four Players to Spend Your Preseason FAAB On (2020 Fantasy Baseball)