Without further ado, let’s dive into the Week 19 Statcast Risers and Fallers! 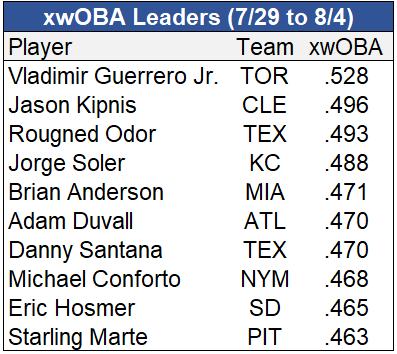 Well, well, well. After a rough start to his MLB career, one that caused many fantasy correspondents to take victory laps on predicting his rookie season a bust relative to his ADP, Vladimir Guerrero Jr. has silenced those critics over the last month. Since the All-Star break, he is slashing a hefty .356/.411/.598 and has dragged his season-long wRC+ up to a respectable 116. His Statcast readings are also following suit, with his xwOBA up to .353 and hard-hit rate above 40%. This is likely the start of a major breakout. Don’t be surprised if Vlad Jr. finishes the season with a .300 AVG and .500 SLG while carrying your team through the fantasy playoffs.

It looks like the annual Rougned Odor six-week hot streak is upon us. The Texas second baseman smashed eight home runs in July and increased his OPS from a derelict .629 to an improved .703 in the same span. Even during his hot streaks, Odor won’t provide much support for ratio stats. But he’s a solid bet to compile a fair share of home runs and steals. Interestingly, he is making some of the hardest contact of his career in 2019, with a 13.6% barrel rate that is nearly double his career average. The downside of this improvement is whiff and strikeout rates well above his previous career norms.

Odor’s teammate, Danny Santana, is quietly in the midst of a fantasy breakout in 2019. Though he started the season as a versatile bench bat, he has elbowed his way into Texas’ starting lineup. His 17 home runs, 12 steals, and 49 RBIs in a mere 319 plate appearances prorate to 35, 25, and 100 over a full season’s worth of playing time. He’s also lighting up the ratio board with a .321 AVG and .938 OPS. While Santana’s +.042 wOBA-xwOBA performance indicates some luck in those figures, his 91.6 mph exit velocity, .465 xwOBAcon, and 46.0% hard-hit rate show that most of it is for real. He is still only 72% owned in Yahoo and ESPN leagues, so snatch him now if he’s available. 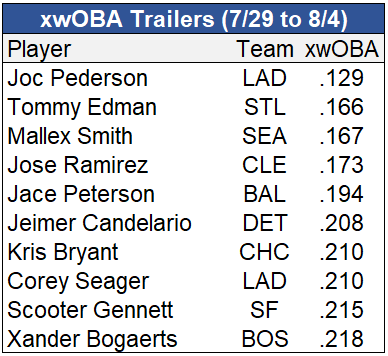 As much as things change, they also stay the same. Such is the case with Joc Pederson, a perpetual breakout candidate who never quite seems to get over the hump. After a hot start to the season that saw him maintain an OPS above 1.000 in early June, Pederson has settled back into merely above-average territory with a current .820 reading. His .344 wOBA, .336 xwOBA, and 43.9% hard-hit rate are nearly identical to his career averages. Perhaps Pederson needs a change of scenery and everyday at-bats, especially against lefties, to take his game to the next level.

While his .284/.385/.523 line in 2019 is strong, Kris Bryant’s game has continued to display some concerning trends this season. His 10.6% pop-up rate is a career-high, while his fly-ball and line-drive rates are at career lows. This batted-ball shift has resulted in a .395 xwOBAcon that is the worst of Bryant’s career. He experienced a major power outage in 2018 that was said to be the result of a shoulder injury. However, his current .250 xBA and .453 xSLG are the same as his 2018 results. Some combination of the juiced ball and fortunate luck is likely propelling Bryant’s impressive baseline stats and his +.032 wOBA-xwOBA performance. But owners in keeper leagues should be put on watch — something seems fundamentally different about Bryant’s ability to make good contact. If the right offer comes along, consider pulling the trigger.

Something is certainly off with Corey Seager this year. The combination of his comeback from Tommy John surgery mixed with a hamstring injury that sidelined him for a month in June are likely behind career-worst showings across the board. Seager’s OPS on the year resides at an unimpressive .778, and his .238 xBA and .405 xSLG indicate that things could be even worse than they look on the surface. Meanwhile, uber shortstop prospect Gavin Lux is destroying the minors and knocking on the door for an MLB promotion. Seager owners are in a tough spot given that it would be difficult to derive any significant value in a trade. Their best bet is to hold out hope that he is able to turn things around as he gets his feel back. 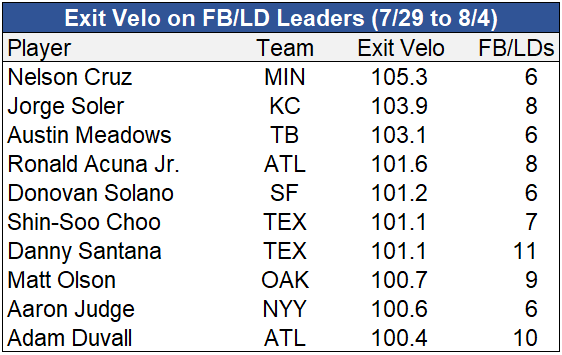 Despite posting the eighth-best wRC+ in baseball from 2015 to 2018, Nelson Cruz took a measly one-year contract from the Minnesota Twins last offseason. Similarly, despite posting a .284 BA and averaging over 40 home runs and 100 RBIs in that same span, fantasy owners were reluctant to draft Cruz until the mid-rounds. Well, the 39-year-old is once again proving everyone wrong, hitting a ridiculous 14 home runs in 22 games since the All-Star break. His slash line on the year now reads .292/.383/.641 while he’s top five in both xSLG and xwOBA. Cruz is a special hitter. Those who took the chance on him in 2019 are being handsomely rewarded.

San Francisco is churning out its fair share of no-name breakouts in 2019. First, it was Alex Dickerson. Then it was Mike Yastrzemski. Now it’s Donovan Solano’s turn. Solano is a 31-year-old minor league vet who hit .318 in Triple-A for the Dodgers in 2018 before following that up with a .322 BA in Triple-A for San Francisco earlier this year. He has kept the bat-to-ball skills working since his mid-season promotion to the Giants, posting an impressive .341 BA and .391 BABIP with the big club. While that type of performance over 148 plate appearances wreaks of batted-ball luck, his .331 xBA says there might be something to it. Solano is still in a part-time role, but it will be difficult for the Giants to keep him off the field if he continues hitting like this. Owners in batting-average leagues who are in need of SS or 2B help should monitor the situation.