This will be the last iteration of Statcast risers and fallers for the year. As a result, we’ll focus on lower-owned players that could be available on waivers in most leagues. 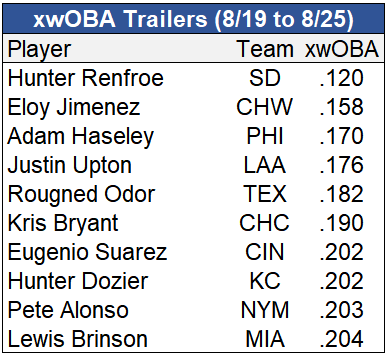 Christian Walker continues to quietly mash in Arizona during his 28-year-old rookie season. The righty slugger finished fifth in the xwOBA readings last week with a robust .472, bringing his season-long figure up to .363. That ranks in the 85th percentile of MLB hitters and ahead of his breakout teammate Ketel Marte. Walker gets the job done by scorching the ball hard all over the field, evidenced by a 95th percentile hard-hit rate and a pristine-looking spray chart. Despite this, Walker is still only ~30% owned in most fantasy leagues. Given Walker’s well-balanced approach and superior Statcast figures, he’s a good bet to produce well over the season’s final month. Grab him now if you’re in need of some additional pop.

Mark Canha leads the Athletics in wRC+ at 148 and it’s not particularly close (Chapman in second place at 129). His role was part-time to begin the year but Canha has been an everyday player since the All-Star break, slashing an impressive .331/.416/.593 since. But exercise caution before deciding to roster Canha. He’s vastly outperforming his xStats, with a .395 wOBA almost 40 points higher than his .357 xwOBA. Moreover, his actual SLG of .545 exceeds his xSLG of .457 by almost 100 points. What gives? Canha has embraced a new approach this year, increasing his pull rate from 39.8% in 2018 to 53.4% in 2019. Heavy pull hitters tend to outperform their xStats in short spurts but they struggle to keep it up long-term. Canha is a huge regression candidate and thus should be avoided on the waiver wire.

Largely forgotten about after a down 2018 and injury to start this season, Seattle third baseman Kyle Seager has been on fire with an absurd 217 wRC+ over the last month. The underlying metrics largely back up the outburst, with Seager sporting a shiny .390 xwOBA over the same span. With solid plate discipline and a more symmetric spray chart in 2019, Seager has re-claimed the 30-home run, .330+ OBP production of prior seasons. He’s also hitting lefties better than righties this year, resting concerns of severe platoon splits. Seager is owned in roughly 50% of leagues currently and should be a target for any team trying to prop up its third base or infield spots.

Last week’s article touched upon the resurgence of Miguel Sano and urged readers to pick him up immediately. In the week that followed Sano bashed three home runs and added two doubles for good measure. Sano is still the aggressive-swinger he’s always been, however, he’s managed to reclaim the elite batted ball metrics of his earlier career. Somehow Sano is still only 40 to 60% owned in leagues, so pick him up immediately. 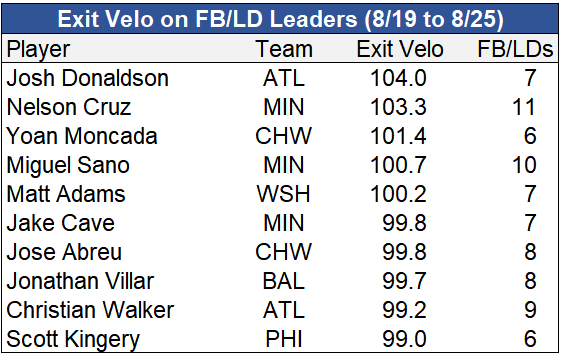 Those interested in picking up Canha merely need to look the way of Hunter Renfroe for a warning sign of what can happen to a righty slugger with a severe pull approach. After smashing 27 home runs prior to the All-Star break Renfroe has only hit four since. His slash over that period reads an ugly .183/.267/.325. Renfroe began the season hitting pulled fly balls at a historic pace and it worked for him for a while, however, that type of extreme approach ultimately proves unsustainable as pitchers adapt. Renfroe is still a good hitter with great natural power but look elsewhere if you want help over the last month.

Hunter Dozier is a tough player to read heading into the home stretch. Even if he drops off his 2019 will go down as a success, currently bolstered by a .258 ISO and 130 wRC+ through over 400 plate appearances this season. But Dozier has been ice cold over the last two weeks, striking out at a 36% clip and garnering only four extra-base hits. Despite improvement in this department, Dozier still hits lefties significantly better than righties. Consider using him in a platoon role if you have the roster flexibility. 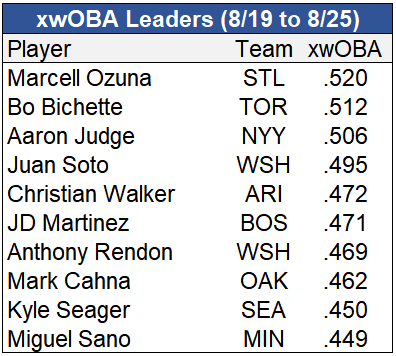 We now have almost one year of stats for Jake Cave’s MLB career and they read at .269/.334/.460 with a 113 wRC+. He’s hit homers at a roughly 25 full-season pace. Not too shabby. Cave has been getting more playing time in recent weeks in the Minnesota outfield due to injuries to Eddie Rosario and Byron Buxton. Unfortunately for Cave, Rosario is day-to-day and should return soon while Buxton has started a rehab assignment in the minors. Look elsewhere if you’re trying to catch lightning in a bottle on the waiver wire.

It’s a bit surprising that Scott Kingery, given his speed and multi-position eligibility, is sitting at only 35-40% owned in fantasy leagues at this point in the season. Through 390 plate appearances this year Kingery has hit to a .834 OPS and is pacing at 25 HR / 15 SB over a full season. Kingery’s xStats don’t quite measure up to his box score production (.315 xwOBA compared to .352 wOBA). However, a player with his speed should be expected to consistently outperform by earning his share of infield hits and stretching singles into doubles. Kingery left last night’s contest with an abdomen injury so monitor his health in coming days. If it’s a short-lived absence, pick him up and don’t look back!

Nicholas Gerli is a featured writer at FantasyPros. For more from Nicholas, check out his archive and follow him @nickgerli1.

The Outliers: 10 Players Whose 2019 Performance Can Be Ignored (Fantasy Baseball 2020)

So You Lost at Fantasy Baseball ... Now What?

How to Smoothly Expand Your Fantasy Baseball Keeper or Dynasty League

How to Maintain Competitive Balance in Your Keeper and Dynasty League