Week 11 got off to a hot start on Thursday night when Myles Garrett attacked Mason Rudolph with the quarterback’s own helmet. While AFC North games can get heated (remember the Steelers/Bengals brawls from the past few years?), Thursday’s game marked a troubling escalation. The Sunday slate of games should be much calmer, and let’s take a look at who our projected ownership tool expects to be highly owned this week. 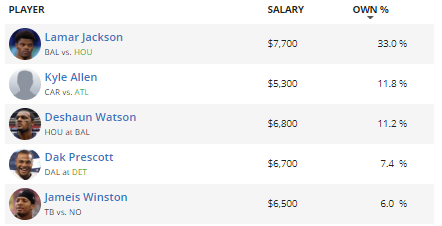 Lamar Jackson has averaged more points per game than any other quarterback, so it’s no surprise that about 33% of DraftKings users should have him in their lineup. He takes on a banged-up Texans defense that’s without J.J. Watt, and they might even be relying on newly acquired corner Vernon Hargreaves to make plays. His opponent, Deshaun Watson, slots in at third on this list because the game should be a shootout. Vegas has the over/under at a whopping 51 points, so don’t be surprised if both quarterbacks have top-10 finishes. Also, expect Kyle Allen to be a popular option this week as his Panthers take on the Falcons. Sure, the Falcons should get Desmond Trufant back, but they have also allowed the fifth-most 23.7 DraftKings points per game to the position. Dak Prescott and Jameis Winston round out the list, and they’re both in a similar price range with good matchups. For Prescott, the Lions have surrendered the seventh-most points per game to quarterbacks. For Winston, he gets to take on a New Orleans team without star corner Marshon Lattimore. Both should pay off their reasonable salaries. If you’re looking for a cheap or contrarian option, consider Ryan Finley ($5,000, 0.8% projected ownership) against the Oakland Raiders, who give up the third-most points to quarterbacks.

Trading: How to Successfully Land a Megastar (Fantasy Football)

What is the Right Amount of Risk to Absorb on Draft Day? (Fantasy Football)