The injury bug hit hard last week, so that means we’ve got some interesting values in DFS this week. I’ll be covering the players who are expected to be highly owned in DFS according to our handy projected ownership tool so that I can give you some handy lineup advice each week. Ready? Let’s get started. 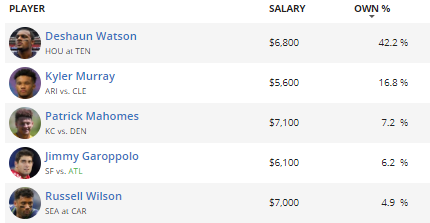 Deshaun Watson is chalk this week. Fire him up in cash leagues, consider betting against him when making GPP lineups. He’s got a juicy matchup with the Titans that’ll help determine the AFC South, and Tennessee won’t have either Adoree’ Jackson or Malcolm Butler to slow Watson down. The quarterback averaged 260 yards and two touchdowns against the Titans last year, so look for him to produce similar numbers. Kyler Murray should also be a popular option against the Browns with his bargain-bin $5,600 salary. Patrick Mahomes and Russell Wilson are a pair of expensive choices who should be owned in a decent chunk of lineups, although neither have great matchups. Vic Fangio’s Broncos have been on the up-and-up of late, while the Panthers’ putrid defense has led teams to prioritize the run, not the pass. Jimmy Garoppolo also makes the list with his swiss-cheese matchup with the Falcons. Look for this one to be a shootout as the 49ers will be without two of their top corners. Now that we know Daniel Jones is out, I’d look for Eli Manning ($5,200, 4.7% projected ownership) to see an uptick in ownership for Sunday.