This week’s the last one for most redraft leagues, but DFS continues. I hope that if you play redraft, you’re still fighting for a championship. If not, DFS is a good distraction. Each week, I’ll be offering you some fantasy analysis on the ownership numbers from our projected ownership tool, so let’s get started! 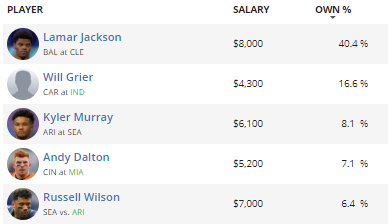 There’s going to be a lot of chalk on DraftKings this week. First up, we’ve got Lamar Jackson at quarterback. Jackson has a terrific matchup against the Browns, and although the Ravens lost to them back in Week 4, they’re now without Myles Garrett, and both Sheldon Richardson and Olivier Vernon are questionable. That’s not good news if you’re playing the most mobile quarterback in the league. On the other side of the salary spectrum, we’ve got Will Grier up next. While it’s always a gamble to bet on rookie quarterbacks in their first career starts, rookies haven’t been bad in their debuts this season. The Colts’ soft defense isn’t a bad draw, either, as they’ve given up 72 points in the past two weeks. Kyler Murray, Andy Dalton, and Russell Wilson round out the list at under 10%. While Dalton and Wilson both have good matchups, I’m less sold on Murray this week. If you’re looking to avoid Jackson and don’t want to commit to Grier, I think either of those two would be good bets.