The NFL regular season is almost over. Most redraft fantasy leagues should have begun their playoffs by now. If you’re out of contention for your redraft title, DFS is a good way to keep up with fantasy football. And each week, I’ll be offering you some fantasy analysis on the ownership numbers from our projected ownership tool, so let’s get started! 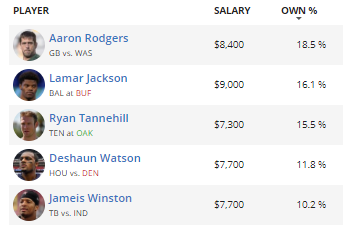 Aaron Rodgers and Lamar Jackson lead off this week’s list, and they’re projected to be owned in a combined 34.6% of lineups. Rodgers comes into this week with what may seem like a better matchup than it actually is. The Redskins aren’t a good football team, but they can run the clock out and keep the ball away from their opponents. In their last six games, opposing teams have scored more than 21 points just twice. Rodgers might not be the slam-dunk play that so many seem to think he is. Jackson’s next with a price tag that’s $600 higher. The Bills are the third-best team against quarterbacks in terms of FanDuel points per game — but they’re worse than the Patriots and 49ers, both of whom Jackson has already dunked on. He’s as safe of a bet as you can get. Ryan Tannehill is the cheapest guy on the list, and his $7,300 salary makes him a good buy against Oakland. Look for him to hit on a few splash plays against one of the league’s worst secondaries. Deshaun Watson and Jameis Winston round out the list. Watson takes on the Broncos, who rank as the fourth-best team against quarterbacks when you look at FD PPG, but again, he just beat up on the first-overall Patriots. Look for him to do the same to Denver, especially if Von Miller can’t play. Winston has a slightly easier matchup against Indy, but then again, Winston can implode against both bad and good defenses. He’s always going to be a high-upside, high-risk option.