Most redraft leagues should be onto the semifinals. If you’re out of contention for your redraft title, DFS is a good way to keep up with fantasy football. And each week, I’ll be offering you some fantasy analysis on the ownership numbers from our projected ownership tool, so let’s get started! 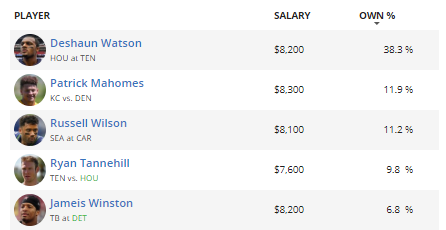 Deshaun Watson is chalk this week. Fire him up in cash leagues, consider betting against him when making GPP lineups. He’s got a juicy matchup with the Titans that’ll help determine the AFC South, and Tennessee won’t have either Adoree’ Jackson or Malcolm Butler to slow Watson down. The quarterback averaged 260 yards and two touchdowns against the Titans last year, so look for him to produce similar numbers. Patrick Mahomes and Russell Wilson are a pair of expensive choices who should be owned in a decent chunk of lineups, although neither have great matchups. Vic Fangio’s Broncos have been on the up-and-up of late, while the Panthers’ putrid defense has led teams to prioritize the run, not the pass. Ryan Tannehill is the most affordable guy on this list as he takes on the Texans’ disappointing secondary. They give up 21.5 FanDuel points per game (FD PPG) to quarterbacks, sixth-most in the league. Also, the Titans may have to rely more on their passing game this weekend with Derrick Henry banged up. Jameis Winston wraps up the list against Detroit’s similarly lousy secondary, but he’s always a boom-or-bust option at quarterback. Now that we know Daniel Jones is out, I’d look for Eli Manning ($6,800, 3.0% projected ownership) to see an uptick in ownership for Sunday.