Curtis Samuel could be in for a big year in 2020

If you aren’t familiar with what air yards are, it is the intended passing yardage total from the line of scrimmage to an intended receiver, regardless of whether that ball was caught or not. Put another way, it is a player’s yards per target multiplied by their targets. Simple enough, right? So what an air yards differential tells us is how many receiving yards a receiver was intended to have versus how many they actually brought in, factoring out yards after the catch. Why is that important? This differential tells us what a receiver’s ceiling could’ve been had more targets been either thrown on target, not dropped, or caught for any other factor.

Take Mike Evans for example. He led the league in air yards in 2017, but finished as WR17. One year later he capitalized on the high opportunity he was seeing and was able to rebound to WR9 in 2018. He was off to the same story in the early season of 2019 before he broke out. It was not a coincidence that he bounced back this year and is easily tracked via AirYards.com or a similar site. In order to assess the wide receiver group going into 2020, let’s see how reliable this differential has been over the past few years.

In 2017, the top air yard differentials are listed with their positional finish that year, followed by their finish the following year. A better year or top-five finish is highlighted in green, worse is in red, and maintained is in neutral: 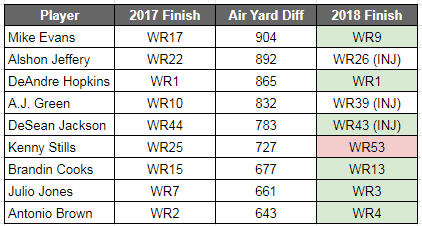 Notice a trend? Every wide receiver not named Kenny Stills finished better than the year before or as a top-five receiver, excluding injuries. Seems pretty good so far. 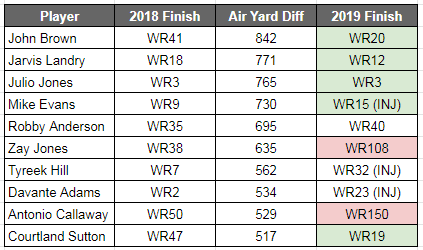 If we factor out major multi-week injuries, it still has a high rate of success in projecting an increased performance the following year. We also notice some higher jumps from receivers outside of a top-10 finish from both 2017 and 2018. Now that we have proven how effective this method is, we can see who is due for a positive rebound in 2020.

Odell Beckham Jr. (CLE): WR25 – +718 air yards
With sky-high expectations coming into the season thanks to an overhauled roster, the Browns still managed to flounder. That is not to say they completely disappointed from a fantasy perspective. Jarvis Landry, Nick Chubb, and Kareem Hunt (who returned late in the season) all enjoyed healthy production. Beckham seemed to be one of the few left out and majorly disappointed those who drafted him high.

However, when we look closer, we can see the opportunity was there. With a generous 25% team target share and an air yard imbalance of 781 yards, he is my favorite rebound candidate of 2020. Beckham has been highly regarded as one of the best receivers in the league for years, so don’t let one down year fool you. Sprinkle in the facts that he is due for positive touchdown regression and will have new coaching next year, and something is bound to give. Enjoy his decreased value going forward and use it to scoop him up at a discount for next year.

Curtis Samuel (CAR): WR36 – +941 air yards
The air yard differential leader of the league, Samuel left the most yards unaccounted for out of any receiver by a landslide. John Brown was the air yard differential leader of 2018 while finishing as the WR41. What did he do the following year? Jumped up more than 20 spots to finish in the top-20. Granted, Brown changed teams and quarterbacks and essentially the same can be said for Samuel.

Longtime head coach Ron Rivera is no longer with the team and the inept Kyle Allen will no longer be under center. In fact, Allen had the worst QBR in the NFL when it came to throwing a deep ball (20 yards or more downfield) by the time he got benched. Samuel has one of the highest aDOT figures among qualifiers. This was a bad combination. From Week 15:

Kyle Allen throws the league’s worst deep ball, w/ a QBR of 30 according to @SportsInfo_SIS.

Imagine if Grier simply has an average deep ball..

Will Grier will have another year to develop since I’m assuming Cam Newton will be heading to free agency. If not, that’s also good for Samuel. Just about anyone other than Allen and his poor deep accuracy will be an improvement. D.J. Moore has cemented himself as the team’s top wide receiver option, but the opportunity for Samuel already co-existed with his presence. Don’t expect a major leap considering his Moore’s presence, but a considerable uptick is still plenty likely.

John Brown (BUF): WR20 – +627 air yards
Speaking of the air yard differential leader in 2018, look who it is! As mentioned under Samuel, Brown capitalized very well from being the leader a year ago. Even with his stark improvement, he finds himself on this list yet again. He has emerged as the Bills’ clear No. 1 and has shown great rapport with Josh Allen. Showcasing a healthy 115 targets on the year is a reliable indicator of this connection. We can expect Buffalo to add some offensive skill positions in either free agency or the draft this year, but unless it’s a clear-cut top talent, Brown will remain in his productive ace role.

Mike Williams (LAC): WR41 – +616 air yards
Williams has been a tough player to judge for fantasy. He is displaying a full pendulum swing from 2018 to 2019 in touchdowns going from 10 to only two despite similar usage. Touchdowns aside, he’s made some spectacular catches this season:

He was able to barely eclipse 1,000 yards on the year and was the only one to do so while finishing worse than WR25 (again, touchdown totals are volatile). The most discomforting notion is the likely switch from Philip Rivers at quarterback. There will be a lot of mouths to feed in Los Angeles once again, but I’d bet on him retaining his value unless a horrendous quarterback situation develops.

DeVante Parker (MIA): WR11 – +581 air yards
Finally having the career breakout year that everyone has been waiting for, the former first-round pick came through in flying colors on his way to a 72-1202-9 receiving line. The Dolphins’ receiving group was begging for someone to step up and Parker answered the call.

Miami will load up on young talent in the draft since they have a plethora of high-round picks. A second year under coach Brian Flores should also do the team good as a whole. While the rent-a-quarterback, Ryan Fitzpatrick, will not be their long term answer, Parker has earned considerable fantasy attention in 2020.

Look for all of the above names to either maintain their high-end value or increase their performance in 2020. If their targets remain anything near similar, the air yard balance should lean towards more actual receiving yards instead of just high air yards.

Thanks for reading and stay golden! If you like what you learned, follow me @DavidZach16 for more interesting stats and tidbits throughout the year.