If you are reading this, it is clear that you like to get a head start on your fantasy baseball research. It is late January as I write this, with teams being a couple of weeks away from even reporting to Spring Training. With no new data being collected, we only have historical data and projections to look at. Steamer is one of the most popular projections systems out there. Their projections come out really early on and are updated with any new information that comes out. You can find these projections on FanGraphs (hitters here and pitchers here), and they are easy to download into an Excel file to look at all at once.

Of course, no projection system is perfect. Life is unpredictable, and so is baseball. Inevitably, these projections will be really wrong about a lot of players, but that does not make them worthless. These projections give us a strong starting point in evaluating players. We can tune the projections to our specific league settings and then use those numbers to rank players and compare our rankings with Average Draft Position data to identify under-valued and over-valued players. That is what we will do here.

I am using the standard 5×5 league settings here, so that means we are looking at runs, home runs, runs batted in, stolen bases, and batting average. My process here was to download the projections, filter out hitters with less than 400 projected plate appearances, find the percentile rank for each player in each of the five categories, and then average out those ranks, and then get one master rank value for each player. After that we can subtract the player rank from their ADP and use those values to identify the players that are potentially being drafted much too early or much too late.

Here is a snapshot of my Excel file, showing the top 20 hitters based on Steamer Projections for a standard 5×5 categories league (notes: the ADP column is hitters-only ADP, and I am only using the top 200 hitters by that ADP for this analysis): 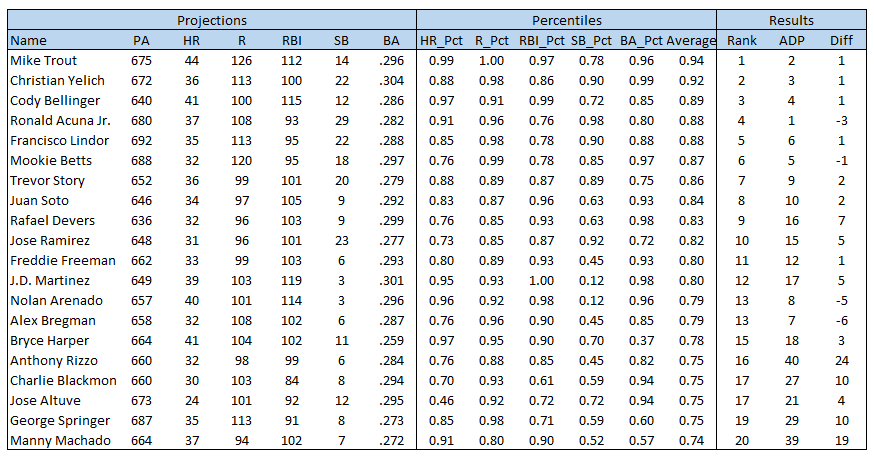 The higher the number in the far right column, the higher the draft value.  You can see that Anthony Rizzo was in the #16 spot in our rankings, but he is currently the 40th hitter off the board in drafts. The opposite is also true, we would want to consider avoiding any players that have much higher ADPs than our ranks.

Here are the biggest standouts when sorting the ADP-Rank column from lowest to highest (I filtered catchers completely out of the data): 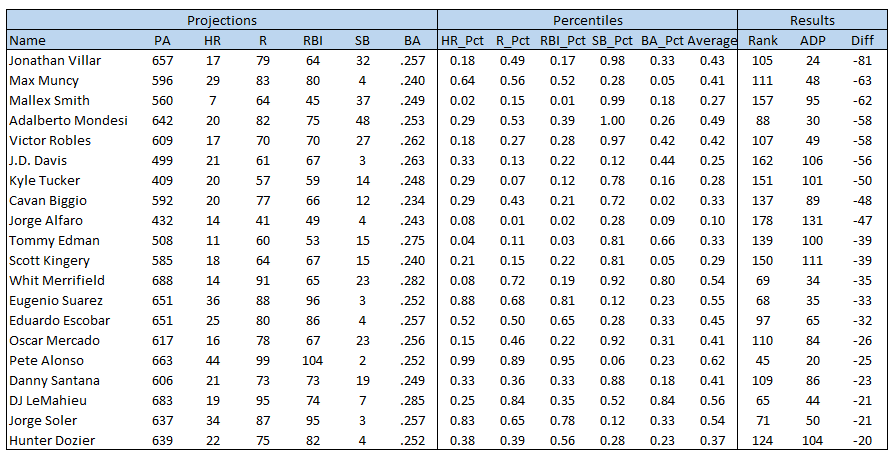 The common theme at the top of the list is high steals players that do not do much in other categories. Jonathan Villar is coming off a monster season, but his career history and move away from Camden Yards has his runs, homers, and RBI projections looking pretty bleak. It is important to note that it may be worth drafting some of these steals-only players near where they are currently being drafted, just because of the impact they can have on the steals category. With teams running less and less every year, stolen bases have become pretty scarce, a good chunk of the league’s steal attempts are held by a small group of players. A guy like Mondesi can win you the steals category by himself a lot of weeks, and you will not find any other category where that can happen.

Steamer is really not liking the top two home run hitters in the league last year either, with Pete Alonso and Eugenio Suarez taking major penalties for their low batting average and low steal counts.

Now for the “good value” players: 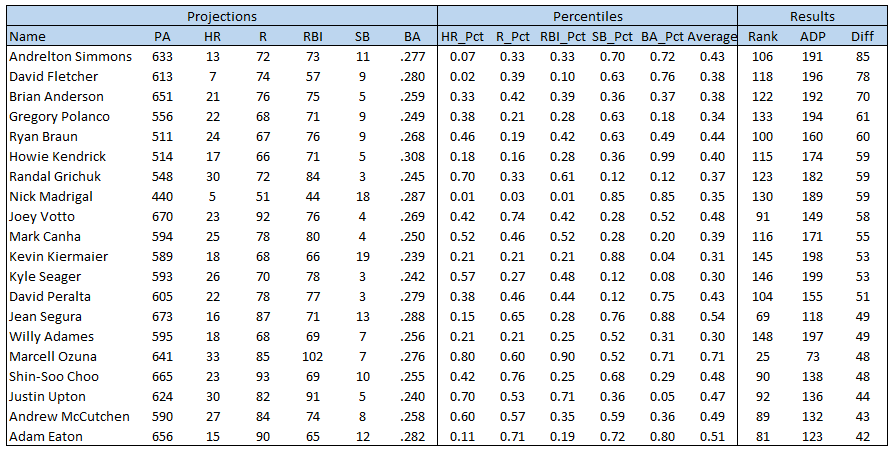 You can see that most of these ADPs are really up there. That is a natural occurrence as the potential differential increases as ADP increases (since ADP cannot be negative). We see a lot of weaker bats here, with only two guys projected for 30 or more homers. This makes some sense as players can be biased towards the long ball and can at times neglect the less sexy categories like batting average and steals. Nobody is going to be excited to draft Andrelton Simmons and David Fletcher this year, but there is real value in them boosting your team in steals and batting average.

Since that list was made up of largely later round players, here are some other notables from the data:

I am using Yahoo’s standard points league scoring for this analysis. Here is that scoring system, just for you to keep in mind if your league scores differently:

The specifics of your scoring settings are of huge importance here. Slight changes like not penalizing for strikeouts or giving more or less points to steals change things drastically. Here are your top 20 projected points scorers this year, with their hitters-only ADPs and differentials based on the above scoring settings:

Not looking much different than the category league rankings above, but Acuna takes a bit of a dive down to #8 in this format.

Let’s get into the differentials, here are the worst 20 values based on ADP minus rank:

Plate appearances are really important in both formats, but it is a bit more so in points. If you can get 25 at-bats from a guy over the course of a week, he is likely to help you out in a points league just because of the opportunity, while in categories he could really hurt your team if he has a poor week. You see a lot of guys with less than 600 PA’s on this list, which makes sense. You really want to prioritize full-time players in points leagues.

You see that we hate Jonathan Villar even in points leagues, but some new names arise here. Kyle Tucker and Tommy Edman are projected to be near top ten round players, but the lack of volume and lack of really standing out in a certain category hurt the points totals. You also see strikeouts being an issue, with guys like Victor Robles, Max Muncy, Keston Hiura, Adalberto Mondesi, Javier Baez, and Cavan Biggio taking a hit with their high strikeout rates.

Now for the good value players:

This is all about the walk. While you get no credit for a walk in a standard 5×5 categories league, a walk is as good as a single in most points league. This becomes a huge boost for guys like Joey Votto, Shin-Soo Choo, Carlos Santana, Matt Carpenter, and Andrew McCutchen. In the same vein, not striking out is a plus as well, as we once again see some of the top contact bats in the league present on this value list (Simmons, Fletcher, Segura, Kendrick).

When we filter just the top 50 in ADP, we once again see Rizzo, Stanton, and Machado at the top of the value list. George Springer, Kris Bryant, and Bryce Harper round up the top five in under-drafted players in the top 50.

Again, it is really important to run this kind of analysis using your specific points league settings, the ranks can really change dramatically with different tweaks to the scoring system.

I hope you have found this post interesting and informative. We will be back soon to analyze the Steamer projections for starting pitchers.