One of the things that separates fantasy baseball from fantasy football is all of the different positions you have to fill out on your roster. There are eight different positions that you have to put players in week in and week out (although I am looking for more people to join my no catchers protest). This brings in yet another strategic element to the draft. It is good to know what each position looks like individually – which positions you can wait a bit on and which to prioritize early in the draft.

Before we dive in here, I will say that you shouldn’t go overboard with this. Your first priority should be to take the best hitter available when drafting and work out the positional stuff later, but this information makes for a good tiebreaker in a lot of cases.

So what do we see in 2020? I am using ESPN’s position eligibility for this post, and while different sites have some differences, in general terms this will apply to all websites (the differences in the percentages will be too slow to really change our outcomes). We’ll start with the top 150 hitters (about how many hitters will be drafted in a standard, ten-team league), here is the positional breakdown for those players: 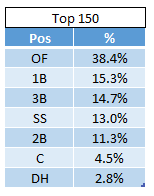 I counted any player with dual eligibility twice, and any player with three positions three times in the data. We see a pretty even split here. You would expect there to be significantly more outfielders since there are three times more outfielders on the field than other positions, so that makes sense. The non-catcher infield positions are pretty close, with second base lagging a few points behind. With that many hitters, this is pretty much expected. Let’s drill down to the top 100: 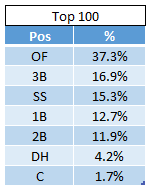 First base takes a bit of a dive here down to 13%, while third base takes most of that share. Now for the top 50: 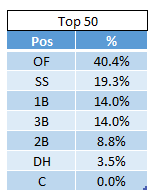 Outfielders separate themselves even more, jumping up over 40%, while third base and shortstop taking a climb as well at the expense of first and second basemen. We’ll finish up with the top 25: 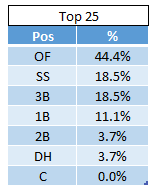 Outfielders are king, increasing, even more, when we look at just the top 25 hitters. Shortstops and third base tied for second and then a large gap down to first base, followed by an even larger gap down to the one second basemen (Jose Altuve) and DH (Yordan Alvarez) in the top 25.

These findings are accentuated when you really look at the player pool closely and/or start doing some drafts. Through my time looking at the rankings/projections and doing a few drafts, a few things are pretty clear to me.

The best strategy will always be to just draft the best available hitters; it’s a long season with lots of moving parts, but it does give you a little advantage if you understand the depth of each position. Doing a few mock drafts before the real thing really gives you a good feel for this, so head on over to our mock draft simulator and give it a go!

Hitters Outside the Top 100 Overall that Can Finish No. 1 at Their Position (Fantasy Baseball)