Dynasty Players to Give Up On (2020 Fantasy Football)

Whether he’s playing or not in 2020, Sammy Watkins is a player that is best forgotten.

“Buy Low” articles are almost their own cottage industry for fantasy football sites. It makes perfect sense why that is. Who doesn’t want to pay less for something that can you give you good value (or fantasy production in this case)? I’ve often discussed the danger of buying low on the DynastyTradesHQ podcast. When buying low it’s assumed that the player your acquiring will “bounce back”. What’s often ignored is that the production provided by some of these players will continue to decrease. There’s always a lower bottom that can be reached. The players highlighted below are examples of this. Yes, you should be able to acquire them for a reasonable price. But if they fail to produce even to the levels of their modest acquisition cost, what do you really gain?

Sammy Watkins (WR – KC)
Watkins could be the poster child for players to give up on. Throughout his career, he’s teased fantasy players with flashes of brilliance, like in Week 1 of the 2019 season. With Tyreek Hill forced out of the game due to injury Watkins’s exploded for 198 receiving yards and three touchdowns on nine receptions. Those 198 yards ended up representing 29% of his receiving yards for the entire season. His 46.8 fantasy points that week were 37% of his fantasy points for the season. Watkins went on to break the double-digit scoring threshold in just five of 14 games played. As you may have noticed, I said in 14 games played and not 16 games. As is his custom, Watkins missed two games last season, bringing his career total to 76 games out of a possible 96 games played. He hasn’t played a full 16 game season since his rookie year in 2014.

It’s not as if Watkins hasn’t had numerous opportunities to produce. Last year, with Tyreek Hill out of the lineup and being fully healthy, Watkins was outscored each of weeks 2,3 and 4 by Demarcus Robinson. Even tethered to some of the most prolific passing offenses the past three seasons, he’s failed to produce better than a WR4 season. The Kansas City offense ranked fourth in passing yards per game last season after they ranked third in 2018, and the Los Angeles Rams, who Watkins played for in 2017, ranked 12th.

At some point this offseason, you’re going to see a “buy low” article that mentions Watkins as a buy. Ignore it. He is not someone you should buy. His contract calls for him to be paid $21 million if still a Chief beyond June 1st, and the Chiefs can save $14 million in cap space by cutting him post-June 1st. Based on the lack of production he’s provided, there’s a nearly 100% chance he’ll be cut. It’s hard to envision Watkins find a more conducive situation to wide receiver success than he’s had in Kansas City. Based on his recent comments, Watkins may take the 2020 season off, but most things Watkins should be taken with a grain of salt since he has a habit of saying odd things. Whether he’s playing or not in 2020, he’s a player that is best forgotten.

I’m non-responsive armed with a conscious i breath the laws of physics moving through higher dimensions I’m constantly shaping and shifting I’m just here on a visit..! #LIMITLESS14 #WIZARD14

Devonta Freeman (RB – ATL)
Freeman was a popular “bounce-back” target for many fantasy players before 2019. With a current ADP of RB32, which will surely drop once the 2020 running back class enters startup drafts, after finishing last year as the RB19 with 14.1 points per game, Freeman may seem like a value. That RB19 finish is a little less impressive once you look a bit deeper at it. Freeman scored 26.8 fantasy points in Week 6 and 33.7 fantasy points in Week 16. Those two weeks accounted for 31% of his fantasy scoring in just 14% of his games played in 2019. Consistency wasn’t something you could count on last year either as Freeman finished seven of his 14 weeks played as an RB3 or worse.

Recently there was some excellent debate on Twitter (it’s worth your time to read the entire thread below) pertaining to the age cliff for running backs, but most would agree that a soon to be 28-year-old running back has more years behind him than he does in front of him.

This is another very interesting and plausible-sounding hypothesis and I have no idea if it’s true or not.

It’ll take me a while to put together the data set to test it and I’m going to bed now so somebody do me a favor and pester me about this tomorrow.https://t.co/TTWo1sURGW

Despite missing 14 games in 2018, Freeman’s 951 rushing attempts since he entered the league in 2014 ranks as the 13th most in the NFL. When you include receptions, Freeman jumps to the 10th most running back touches since the 2014 season. 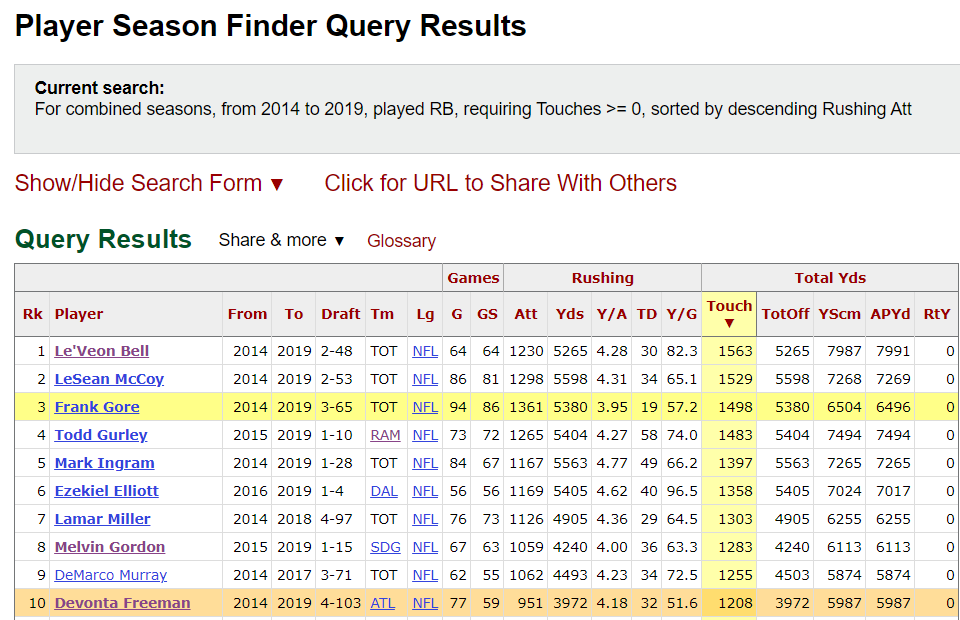 Freeman ran for a career-worst 3.6 yards per carry last season. Whether the blame for this lies with Freeman of the Atlanta offensive line is almost beside the point. Per Football Outsiders, the Falcons ranked 3.97 adjusted line yards ranked 24th in the league last year. Per Fantasydata.com, Freeman’s 16.9% juke rate ranked 41st, and his yards created per rushing attempt of 1 yard ranked 40th. It’s entirely possible that Freeman’s rushing ability has regressed, and the Falcons offensive line is bad. With just $7.5 million in cap space, it will be difficult for them to improve their offensive line significantly via free agency. Despite his relative value, I suggest you let other’s take on the risk that Freeman represents.

David Johnson (RB – ARI)
David Johnson is a player I have never been able to buy-in on. His cost always out-weighed his production in my eyes. Going back to the 2016 season, his second in the league, he’s consistently underperformed compared to his ADP. The 2016 season is the only time Johnson has performed as an elite running back, scoring 25.5 points per game. Drafted as the RB1, Johnson injured his wrist the first week of the season and didn’t play again in 2017. I can’t fault a player for getting injured, but the 2018 and 2019 seasons were disappointing as well.

After being drafted as the RB6 in 2018, Johnson finished as the RB11. When a player is drafted sixth at their position, you want them to do better than give you two total RB1 weeks out of 16 games, which is what Johnson gave you in 2018. The addition of Kliff Kingsbury led to speculation that Johnson would bounce back in 2019. This was reflected in his RB7 ADP. Instead of bouncing back, Johnson continued his descent. Among running backs who played at least 10 games, he finished as the RB31 scoring 10.9 fantasy points per game.

Johnson was only able to play 13 games while dealing with a back injury, and when he did play, he often looked old and slow.

He lost playing time first to Chase Edmonds, who put up 17.6, 14.7, and 35 points in weeks five through seven. When Edmonds was injured, the Cardinals traded for Kenyan Drake who started for them in Week 9. He went on to start all eight games he played with the Cardinals and averaged 19.93 fantasy points per game.

Drake is a free agent, but based on how well he performed, the Cardinal’s should do everything possible to retain his services. Even if Drake moves on, David Johnson has given you no reason since the 2016 season to believe he’s an elite running back option. His fantasy production has decreased two straight seasons; he was phased out of the Cardinals offense two times for two different running backs last season. Johnson dealt with a balky back all of 2019, and back injuries don’t typically improve for football players entering their age 29 seasons if you can get a late second for Johnson, cash out and move on.

Jalen Hurts Can Be A Fantasy Football Star (2020 NFL Draft)