Betances averages 115 strikeouts per season over the last half decade

Every year around this time, the questions start to roll in about this year’s article on the Marmol Strategy. I suppose that’s a sign that it has been working. It is, after all, a shortcut to your fantasy baseball championship. In fact, I have four such shortcuts that I’ll be releasing over the next week (see: the Bichette Strategy and Pocket Rockets Strategy). Depending on your league’s settings, there is always a way to game the system in fantasy baseball. The Marmol Strategy is specifically for leagues that don’t have an innings minimum (or a low one) and don’t add quality starts as a sixth category. If you are in a normal 5×5 roto or head to head league that doesn’t require more than 20 innings in a week, you can cruise to the title. Today, I’ll give you the quick rundown of the Marmol Strategy, an example of how it should be executed plus some players to specifically target.

It works because nine dominant relievers equate to three elite starting pitchers. Essentially, you are trading all of your late picks for three aces. Would you do that? Of course you would! The way it works is that mid-tier closers and high-end non-closers (think Carlos Marmol, hence the name) will lower your team’s ratios half as much as a Max Scherzer does. When you draft two of them in the 22nd and 23rd round, they combine to drop your ratios the same amount while providing nearly 200 Ks. Now do this several times over and you’ve got a serious pitching staff with no draft capital spent on it.

Dellin Betances averages 115 Ks per season over the last three years and you can get James Karinchak in the last round for free. He struck out 22 batters per 9 innings last year with sparkling ratios. You didn’t read that wrong: 74 Ks in 30 innings with 16 hits allowed. He’ll get 60 innings for Cleveland last year. So I did say nearly 200 Ks? Make it 230.

Check out the results from the roster I drafted below. Good luck getting a 100 in Draft Wizard without cheating or using the Marmol Strategy (same thing). This is a no-brainer, and only more so when you consider the fact that by letting starting pitchers bypass you for the first 10 rounds, you will easily compile the top lineup in your league. 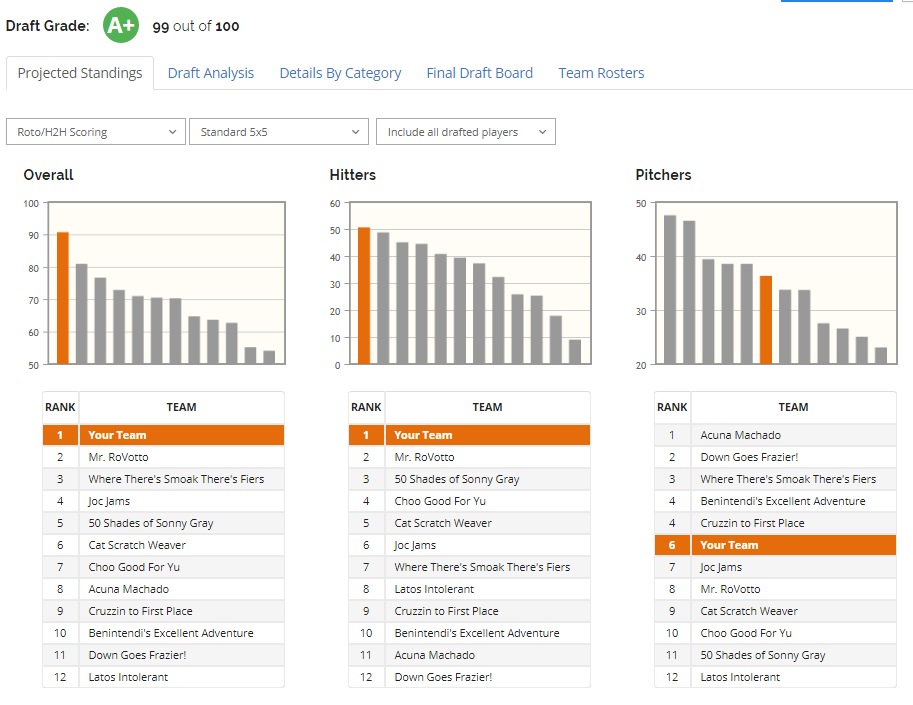 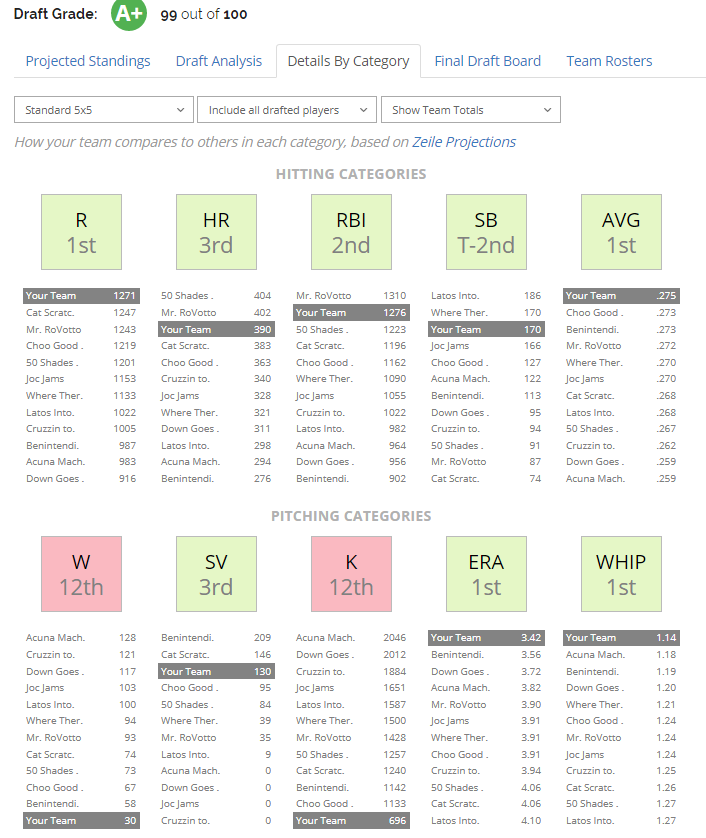 Does my league allow for it?
Many don’t so be careful. If your league requires you to start 4 starting pitchers, stay away and wait to read my Bichette Strategy article tomorrow. If your league only has two starting pitcher spots, you can fill them with relievers who have that designation like Diego Castillo. If you are in a points league, the Marmol strategy is the worst idea ever. If your league requires an innings minimum, you might be able to skirt by if two of Josh James, Alex Reyes, A.J. Puk and Elieser Hernandez make the rotation. Chances are, you’ll need to add one or two of Ross Stripling, Lance McCullers, Jesus Luzardo and/or Julio Urias to make it work. You still don’t draft a pitcher until round 10, but you have to downgrade from second-tier closers like Brandon Workman and Nick Anderson to these starters. You’ll drop to 3rd or 4th in saves while gaining in no other categories. Oh well, you still win, but it will be closer. Your goal is to pick starting pitchers who will own tremendous ratios but have innings concerns. If your league used quality starts instead of wins and/or OBP instead of BA, nothing changes. If your league adds holds and OPS, even better. All leagues are different, so if you have other questions, don’t hesitate to tweet me @bobbyfantasypro.

Who should I target?
I’ll show you by simulating a standard ESPN league draft using our draft simulation software (the results were listed in the above graphics). I’ll take all of the roster settings including 9 flex-pitchers and 0 SPs. In the first 9 or 11 rounds, you should begin to fill out your offense. The ordering doesn’t especially matter, as I can guarantee you will have the best offense in your league by using all this draft capital on hitting while the rest of your league mixes in a few pitchers. I’ll begin by targeting high average guys who rack up steals since those are more difficult to get than power in the middle of drafts.

Now keep in mind, this was for an ESPN league where you do not have to fill a single SP spot. In Yahoo leagues, you’ll need two. In that case, draft Drew Pomeranz and Diego Castillo. Both qualify as starting pitchers but are filthy relievers who are only a minor downgrade from the Betances and Ryan Pressly’s of the world. If you need more, Ryne Stanek and John Gant should do the trick.

This might not be the best strategy for your league…
Don’t hear me wrong, the Marmol works wonders but depending on your league settings, spot in the draft order or any keepers your league might have, the Bichette Strategy, Pocket Rockets or the Moneyball Method might be better for you. I’ll be running through all of these within the next week so keep an eye out or just follow me on Twitter so you don’t miss them.

What are the most valuable kinds of fantasy baseball rookies?

Is Your Team Really As Good or Bad as It Looks? (Fantasy Baseball)