With fly balls soaring over fences in record quantities, the ability for a pitcher to get strikeouts has never been more important. It is very challenging for a pitcher with a low strikeout rate to be successful, especially for fantasy purposes. As we approach March and draft season really ramps up, it is important for us to find some value pitchers that we can expect to improve in strikeout rate in 2020.

One way to do this is to utilize swinging strike rate. If you are unfamiliar with this metric, you can read all about it here. Swinging strike rate is highly correlated with strikeout rate, and just to prove it, here is a scatter plot of K% vs. SwStr% over the last three seasons: 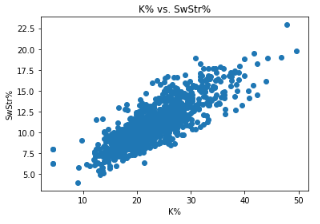 Having this information, we can check last year’s data and see what pitchers had the biggest differentials between their swinging strike rate and their strikeout rate. If a pitcher was getting an above-average amount of whiffs, but only striking out an average amount of batters, there is a real reason to believe they should be adding some strikeouts this year.

Since the swinging strike rate and strikeout rate come in different scales, we will use percentile rank to help us with this. For every pitcher, we will see where his rates come in as a percentile (0-100%) relative to the rest of the data sample, and then see which pitchers have the biggest differentials between those two. Here the 20 pitchers that had the biggest negative difference between strikeout rate and swinging-strike rate (meaning we would have expected them to have more strikeouts than they actually did): 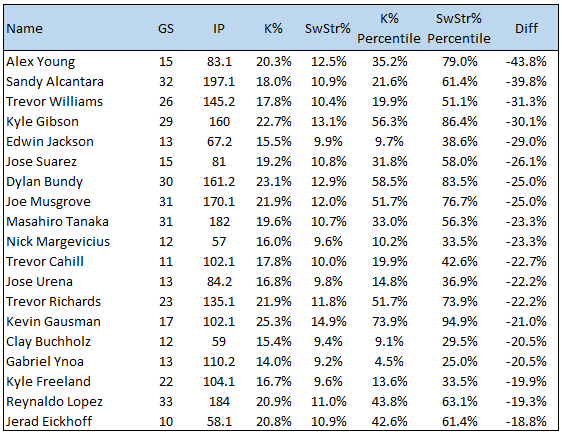 Alex Young and Sandy Alcantara really stand out above the pack. Young had a 79th percentile (meaning he was better than 79% of the rest of the league’s starting pitchers last year) finish in swinging strike rate but was only in the 35th percentile in strikeout rate. Much the same with Alcantara (who is admittedly a lot more interesting for fantasy than Young), coming in with a strong 11% swinging strike rate but a lowly 18% strikeout rate.

Some other guys on the list that you might actually consider drafting are Kyle Gibson, Dylan Bundy, Joe Musgrove, Masahiro Tanaka, Trevor Richards, Kevin Gausman, and Reynaldo Lopez. These guys all appear to have better stuff than their strikeout rate from 2019 suggests. You could find some nice value there, as none of these guys are anywhere near the top of the pitcher ADP ranks.

Now to reverse course and see which pitchers outperformed their swinging strike rates: 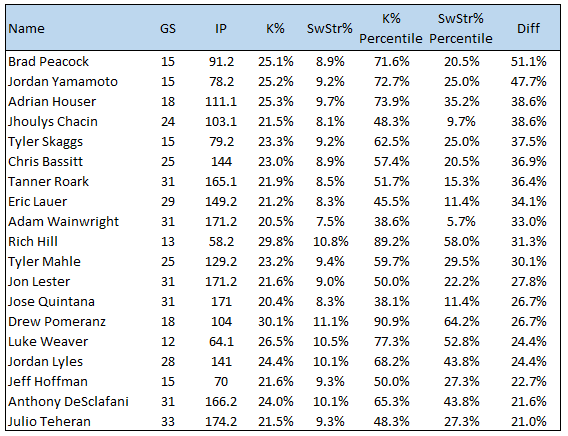 Not a ton of actionable information here, as you do not see too many guys on this list that are interesting for fantasy, but for deeper leagues, it might be worthwhile to downgrade guys like Adrian Houser, Chris Bassitt, Tanner Roark, Adam Wainwright, Rich Hill, Jon Lester, Jose Quintana, and Julio Teheran. To pull off a strikeout rate in the mid-twenties without even getting to a nine-percent swinging strike rate is tough to do, so I would be very skeptical on a lot of these guys’ strikeout totals last year.

This will be an interesting study to replicate a few weeks into the season. If we see a pitcher struggling a bit for strikeouts but posting a high swinging strike rate, that’s a positive sign that the pitcher will see some more success in the near future. You can use these more drilled-down metrics to better evaluate performance and get an advantage on the competition.