Named after the versatile Todd Zeile, FantasyPros’ Zeile projections offer an exclusive tool for managers to use on draft day.

Similar to our consensus rankings, Zeile projections draw from myriad outside sources to present a whole that’s greater than the sum of its parts, using data from outlets such as ESPN, Yahoo, and CBS to provide the most balanced outlook on preseason projections.

In simpler terms, when ESPN projects someone to hit 25 home runs but CBS views the same hitter as a 40-home run guy, Zeile splits the difference.

For this primer, I’ll take a look at five potential draft targets whose Zeile projections stand out in relation to their average draft positions.

The AL Rookie of the Year is being drafted 37th overall despite his 51.1% hard-hit rate and 178 wRC+ 2019, both of which would’ve ranked second in baseball had he qualified for the statistics last season.

Zeile projects Alvarez to finish 2020 with 37 home runs, 105 RBIs, and a .934 OPS, totals that would place him among baseball’s top-12 hitters in each category. Considering he’s just the 27th position player coming off the board at this point, I’d be willing to target him before his current ADP.

The other 15 players are being taken ahead of Abreu, who is currently being drafted ninth at his position despite being one of the most consistent high-average power hitters since he entered the league in 2014.

Abreu has also averaged 150 games per season in his MLB career, making him a low-risk player to target with a mid-round pick. 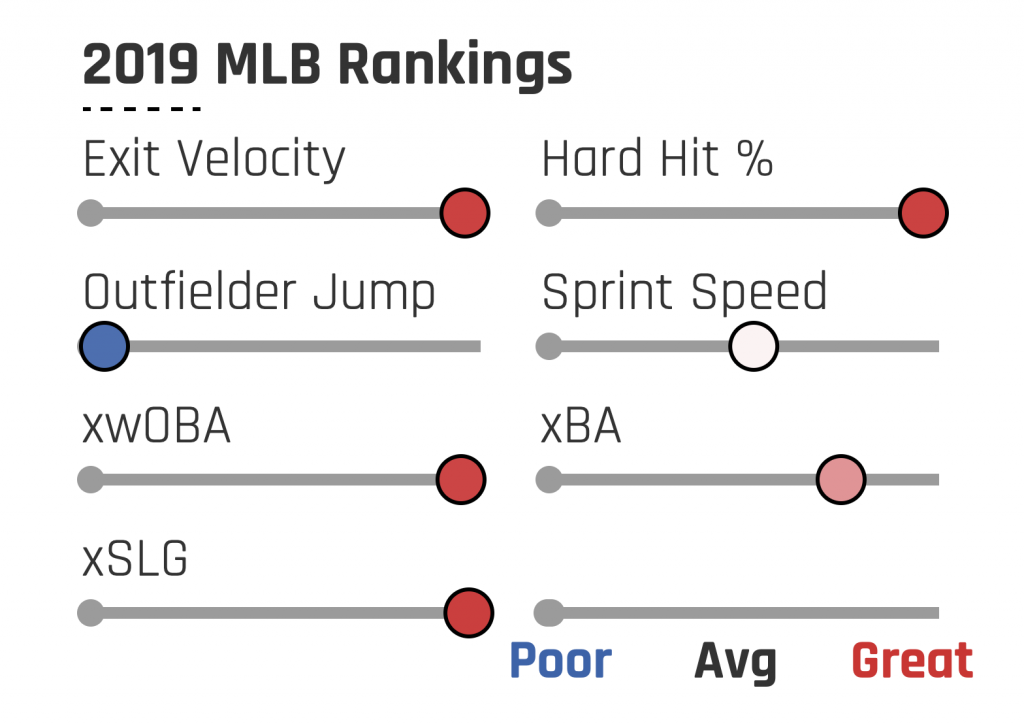 Still, his consensus draft position has him as the 23rd outfielder selected, behind the likes of Victor Robles and Eloy Jimenez, both of whom are riskier picks than Soler by virtue of their being sophomores, as Soler ranked in the 96th percentile in average exit velocity and 95th percentile in xwOBA in 2019.

I wouldn’t reach too high on Soler given the depth at the position, but he’s one of the surer bets to top 35 home runs in 2020, and he would make for a solid mid-round pickup for rosters lacking power.

Zeile currently projects him for 35 home runs, 89 RBIs, and a .853 OPS, which ranks among the projected top-15 third basemen in each category in 2020.

After almost reaching “failed prospect” status a couple of years ago, Sano rejuvenated his career with a 34-home run season in 2019 despite playing just 105 games. His 57.3 hard-hit rate led baseball last season, and his 94.4 MPH average exit velocity trailed only Aaron Judge.

Sano is getting drafted as the 18th overall third basemen, but his high-power, high-OPS upside makes for one of the better profiles at the position.

DeJong is currently getting drafted as the 27th shortstop in fantasy, although his Zeile projections place him among the position’s top 15 in runs (14th), home runs (8th), and RBIs (10th).

Although he isn’t a high-average hitter and he might hurt managers in OPS, he’s done a good job lifting the ball out of the yard in his first three seasons in the majors. He also ranked 8th among shortstops in barrel rate last season, ahead of mainstream fantasy darlings Trevor Story, Willy Adames, and Trea Turner.

I wouldn’t be shocked to see DeJong’s final line resemble that of Carlos Correa, who’s currently being drafted 89 slots ahead of the Cardinals shortstop.