Today I will perform a mock draft punting the saves category. This is probably the most common punt, though it usually involves taking relievers very late or just waiting to add them on waivers. For this exercise, I will just forego the position entirely and see how that helps in the other nine categories.

Check out the rest of the mock drafts in this series here.

I set up this league to have 20 starting slots (10 hitters, 10 pitchers) and two bench spots. Here are the full details:

1.7: Mookie Betts (OF – LAD)
Gerrit Cole and Francisco Lindor went in the top six, which basically gave me no choice but to take the clear best available in Betts. I will never complain about getting this kind of elite production and a good supply of steals with my first pick.

2.6: J.D. Martinez (OF – BOS)
Another best-available pick here, Martinez should have another year or two of elite power numbers with a strong batting average. He is a good second pick behind Betts, as he excels in the two categories where Betts might be less than elite (homers, RBIs).

3.7: Xander Bogaerts (SS – BOS)
With two outfielders to start, it was time to shift to the infield. Bogaerts should at the very least provide a strong batting average, and he has upside to be one of the better fantasy players in all of baseball if he can pick up where he left off last season.

4.6: Charlie Morton (SP – TB)
Pitcher time. Morton has pitched like an ace the last two seasons, so I will roll the dice a bit on his age and hope that he can hold it together for one more year. If he does, he will be an awesome value in the fourth round.

5.7: Chris Paddack (SP – SD)
The opposite of Morton, we have a very young and somewhat unproven guy in Paddack as my SP2. He profiles as a strong WHIP pitcher for his career, which is a nice complement to Morton, who can struggle a bit there.

6.6: Jose Abreu (1B – CHW)
I am going full boring on my offense here, with the aging Abreu anchoring me at first base. His best years are behind him, and the 123 RBIs in 2019 will be incredibly hard to repeat, but I feel good about getting another .280 batting average while he flirts with 30 homers and easily clears 100 RBIs (prorated to a shortened schedule).

7.7: Jose Berrios (SP – MIN)
With the saves punt in mind, I am going for full volume on the pitching side. I want to cram as many innings onto this team as I can, and Berrios gives me just that. He should also have no trouble racking up a 15-plus win pace pitching for the Twins, so that’s a huge advantage for this team construction.

8.6: Corey Kluber (SP – TEX)
Although it requires assuming some risk, Kluber is another great pitching value. He is talented and experienced enough to post elite numbers again in 2020, assuming he is past all of those injuries from his past. This is a nice upside arm for my team.

9.7: Jesus Luzardo (SP/RP – OAK)
There aren’t many higher upside arms than Luzardo in this shortened season, so I will reach a bit to get him.

10.6: Jorge Polanco (SS – MIN)
I love the batting average and runs upside Polanco brings to the table. He could fall towards the bottom half of that Twins lineup, but the peripherals are awesome, and I am focused on safe offensive options in this build. Polanco fits right in.

11.7: Max Kepler (OF – MIN)
I think I have taken Kepler in every draft I’ve done this year, so why not keep the good times rolling? Kepler had an awesome 2019 season and has room to grow. My team has a nice batting average base here, so I can take a little bit of a hit with Kepler in exchange for the counting-stat upside.

12.6: David Price (SP – LAD)
Wins and strikeouts are the names of the game for this build, and Price has a great opportunity to pile up a bunch of both in 2020. The shortened season helps his injury prognosis a bit, as he will have to do less to post a full load of innings. I think he easily outperforms this draft cost if he lucks into a full season, so I am very happy to have him as my SP6.

13.7: Gavin Lux (2B – LAD)
Second base is a gross position, so why not pull the trigger on a huge risk/reward bet in Round 13? You could see Lux being a five-category contributor here. If it doesn’t work out, I’ll just find another second baseman on waivers and piece together production at the ugliest position in fantasy baseball.

14.6: J.D. Davis (3B/OF – NYM)
Upside city here, and I did not have a third baseman. Davis had incredible success while in the lineup last year, so the sky is the limit if he can play the entire season as a starter for the Metropolitans.

15.7: Bryan Reynolds (OF – PIT)
You can never have enough batting average, and Reynolds brings that. He showed a decent amount of power as well, and there is certainly room for the 25-year-old to grow.

16.6: Mike Foltynewicz (SP – ATL)
I want to dedicate most of the rest of my draft to going overkill on starting pitchers. Foltynewicz has always been a good strikeout pitcher, and the wins should come pretty easily for him as well if he can put up even mediocre numbers in 2020.

17.7: A.J. Puk (SP/RP – OAK)
Puk is another high-upside arm with the added benefit of fitting into a RP slot. Another beneficiary of a shortened season, Puk should at least give me a good supply of strikeouts while he’s out there.

18.6: Jose Quintana (SP – CHC)
Time to settle down a bit and take a more boring, safe option here. Quintana has not been a great fantasy option for the last couple of years, but he is a good bet to pile up innings and should find some wins on a competitive Cubs team.

19.7: Josh James (SP/RP – HOU)
The safe thing didn’t last long; I’m back chasing upside. I have no idea what James will do this year, but his ceiling is awesome, so I’ll take a shot.

20.6: Carson Kelly (C – ARI)
Kelly is my favorite last-round catcher, so here we are again.

This is the worst draft I’ve done by the calculations. I was given a C+! I am ranked seventh in both hitting and pitching, equating to eighth overall. I am below average in homers, steals, saves (of course), and ERA, while being strong in wins and batting average and mid-pack in everything else. 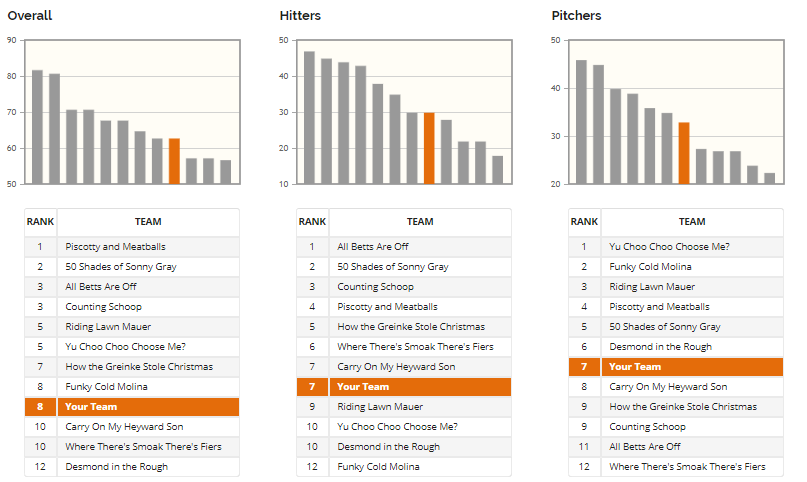 While I probably did not do this optimally, I think the saves punt is something to consider, mainly just because saves become available in-season more than any other category. There is no way I am going into any season intentionally giving up 10% of the possible categories all season long, but saves is always easier to catch up in if you want to devote your draft capital elsewhere.