Ezekiel Elliott will continue to carry a heavy workload, with a shot to be the rushing champ once again.

Whether you’re new to fantasy football or a seasoned pro, our Fantasy Football 101: Strategy Tips & Advice page is for you. You can get started with 10 Mistakes to Avoid in Your Fantasy Football Draft or head to more advanced strategy – like When is it Okay to Reach on Draft Day? – to learn more.

Fantasy football season has truly arrived once the NFL Draft concludes and mock drafts rage rampant. Having an understanding of where certain players are getting drafted does have its benefits when the time comes to draft your time. However, the beauty of fantasy football is the unpredictability of the outcome. You never know what another owner is thinking heading into the draft and who they have their eyes on, so if a player you wanted on your team gets drafted right before your selection, don’t panic, and make sure you already have a back-up plan in place that you feel comfortable with for the entire season.

You can have an idea of who you want to draft, but don’t back yourself into a corner regarding what type of player you want on your team. If a player is available that wasn’t on your pre-draft draft board, don’t be afraid to pull the trigger.

Draft the team that will help you win this year. Sometimes, the pick is easy, and the best player available is the obvious choice. Sometimes, taking a risk on a player with a high-upside is rewarding. Understanding season-long value is key to winning in fantasy football.

I brainstormed some drafting philosophies before the mock to help me build the strongest team possible, but with everything, all decisions were subject to change depending on the flow of the draft.

For RBs, I wanted the highest-value player with proven durability that can help me win down the stretch in fantasy playoffs/championship. Running backs with guaranteed touches that are involved in the passing game are PPR rock stars, and my goal is to acquire as many of these types of players as possible. I wasn’t afraid of passing on the top WR for a multi-dimensional RB that is an explosive runner and efficient the passing game. Another objective for this mock was to handcuff at least one of my RBs if not all of them.

A goal for the mock was not reaching on a QB. The rise of the mobile quarterback has resulted in the rise of QBs fantasy draft stock. QBs seemingly get reached on too early in drafts when elite position players remain on the board. I understood going into the draft that my guy would come to me in the mid-to-late rounds. I also wanted to draft a backup QB I would be confident in starting in case my QB1 had a tougher matchup.

I wanted to draft a potential breakout rookie but I didn’t want to overshoot the pick. Rookie fever has blossomed, and every season, an aggressive owner jumps the gun and drafts a rookie earlier than they should have. If a rookie proves to be extremely productive during their rookie season, the payoff always feels great. However, there is always a risk that the rookie might have to wait a few weeks for serious fantasy production until the team phases out the incumbent starting RB. In other cases, the rookie might be cuffed to a running-back-by committee, dampening their fantasy output.

Alright, time for the picks.

Round 1, Pick 3: Ezekiel Elliott (RB – DAL)
I debated between Michael Thomas and Ezekiel Elliott.  Although I think Thomas is a dynamite WR, I went with Ezekiel Elliott. Elliott is the bell-cow RB1 behind the 9th best offensive line. He has proven to be impactful in the passing game as well, and his QB threw for almost 5,000 yards last season, which makes Elliott more valuable. Elliott was the RB3 in 2019, with 311.7 fantasy points. He will continue to carry a heavy workload, with a shot to be the rushing champ once again.

Round 2, Pick 22: Nick Chubb (RB – CLE)
Hardest pick of the draft for me. I had to decide between Travis Kelce, George Kittle, or Nick Chubb. Having one of the top-2 TEs was enticing, but not more enticing than adding another workhorse RB. The TE position is a lot deeper than last year, so I felt comfortable passing on them. Nick Chubb was second in the NFL in rushing and finished 2019 as RB8, totaling 255.2 fantasy points. Kareem Hunt might cut into Chubb’s receiving production, but both backs can coexist in this offense. Cleveland’s new head coach, Kevin Stefanski, was the Offensive Coordinator for a Minnesota Vikings team that ranked 4th in the NFL in Team Rushing Attempts in 2019 with 476 rushing attempts. This indication of Stefanski’s commitment to the run game bodes well for Chubb in 2020.

Round 3, Pick 27: Kenny Golladay (WR – DET)
I went with the best WR available, which was Kenny Golladay. Golladay was WR9 in 2019, with 248 fantasy points. He could have possibly landed in the top-5 if Matthew Stafford didn’t undergo a season-ending injury. With a healthy Stafford, I think Golladay has a strong chance of landing in the top-5 this season. Golladay is a dominant receiver in all areas of the field. He will continue on his upward progression and seeks his 3rd-straight 1,000-yard season.

Round 4, Pick 46: Darren Waller (TE – LV)
Adding another pass-catcher was my top priority and I wanted a player I knew was going to get the ball thrown his way plenty and that player was Darren Waller. Although the Raiders spent the 12th-overall pick on speed-demon Henry Ruggs III and 81st-overall pick on big-target Bryan Edwards in the 2020 NFL, Derek Carr‘s #1 pass-catcher is Darren Waller. Waller was 3rd among TEs in targets and 2nd in receptions, numbers that might drop this season, but his 76.9% Catch Rate should remain. Waller will continue to showcase his reliable, big-play ability.

Round 5, Pick 51: Stefon Diggs (WR – BUF)
I needed another WR. Stefon Diggs will be Josh Allen‘s WR1. A fresh start could be exactly what Diggs needs to elevate himself back to the elite level he is more than capable of producing. Amidst all the drama, Diggs is coming off back-to-back 1,000 yard seasons, and I believe he can go for 3-straight in Buffalo.

Round 6, Pick 70: Kyler Murray (QB – ARI)
Holding off on drafting a QB has paid off. Kyler Murray is the QB4 heading into 2020, and drafting him in the 6th-round was great value. I am very high on Murray this season after finishing his rookie season as QB7 and showcased his dynamic pass-slinging proficiencies. He was gifted an elite WR1 in DeAndre Hopkins, which should only help his fantasy production. Even if his rushing numbers drop, Murray is still an elite fantasy QB.

Round 7, Pick 75: Michael Gallup (WR – DAL)
I usually try to avoid drafting position players on the same team due to the real-life competition for touches, but Michael Gallup should see a nice uptick in fantasy production in one of the best offenses in the league. Although my least favorite pick due to already having Elliott and the arrival of Dallas’ 2020 1st-round pick, CeeDee Lamb, it made the most sense considering the other available players, my current roster, and the needs of my team.

Round 8, Pick #94: Raheem Mostert (RB – SF)
This was an easy pick for me. Despite being in a running-back-by-committee, Raheem Mostert is the current RB1 in the 2nd-ranked running unit in the league last season and has proven he can carry the bulk of the work. I think Mostert will build on what he started at the end of 2019. This pick could be my biggest steal of the draft.

Round 9, Pick 99: Marquise Brown (WR – BAL)
This was a harder decision, but I went with a young WR with upside. Marquise Brown had an injury that plagued most of his rookie season, so we did not get to see him perform at his highest potential. I expect Brown to be more involved in the offense in 2020, proving he was worthy of Baltimore’s 2019 1st-round pick.

Round 10, pick 118: Emmanuel Sanders (WR – NO)
Another easy decision. Drafting Drew Brees‘ WR2 in Emmanuel Sanders as a late-round sleeper was a no-brainer to me. Sanders proved to be efficient in two different offenses last season. He will line-up opposite of Michael Thomas, which should give Sanders plenty of looks in single-coverage.

Round 11, Pick 123: Phillip Lindsay (RB – DEN)
The signing of Melvin Gordon has a lot of folks sleeping on Phillip Lindsay. Lindsay is a back-to-back 1,000-yards rusher. I do think his numbers will drop compared to the last two seasons due to the arrival of Gordon, but Lindsay should add value to Denver’s offense and could be a flex consideration depending on the matchup. I had no hesitation drafting Lindsay in the 11th-round.

Round 12, Pick 142: Tony Pollard (RB – DAL)
Tony Pollard was a necessary handcuff for Elliott. The 2nd-year speedster could be a risky flex play when Dallas faces a bad defense. Otherwise, Pollard is an insurance policy.

Round 13, Pick 147: Ryan Tannehill (QB – TEN)
I wanted a back-up QB that I could play in case I wasn’t comfortable with Murray’s matchup that week and felt confident playing when my QB1 has a bye week. Ryan Tannehill fits that bill. If Tannehill continues to play at the high-level he showcased when he took over as starter midway through 2019 and becomes too good not to start every week, either QBs become a nice trade piece.

Round 14, Pick 166: Dallas Goedert (TE – PHI)
I needed a back-up TE to round out my roster. Dallas Goedert proved to be a reliable target for Carson Wentz last season, finishing 10th in targets and receptions and finishing 2019 as TE10. The Eagles added a few weapons to their passing game, so Goedert’s numbers should take a hit. Despite that, this pick has good value, especially as my last position player selected in the draft. 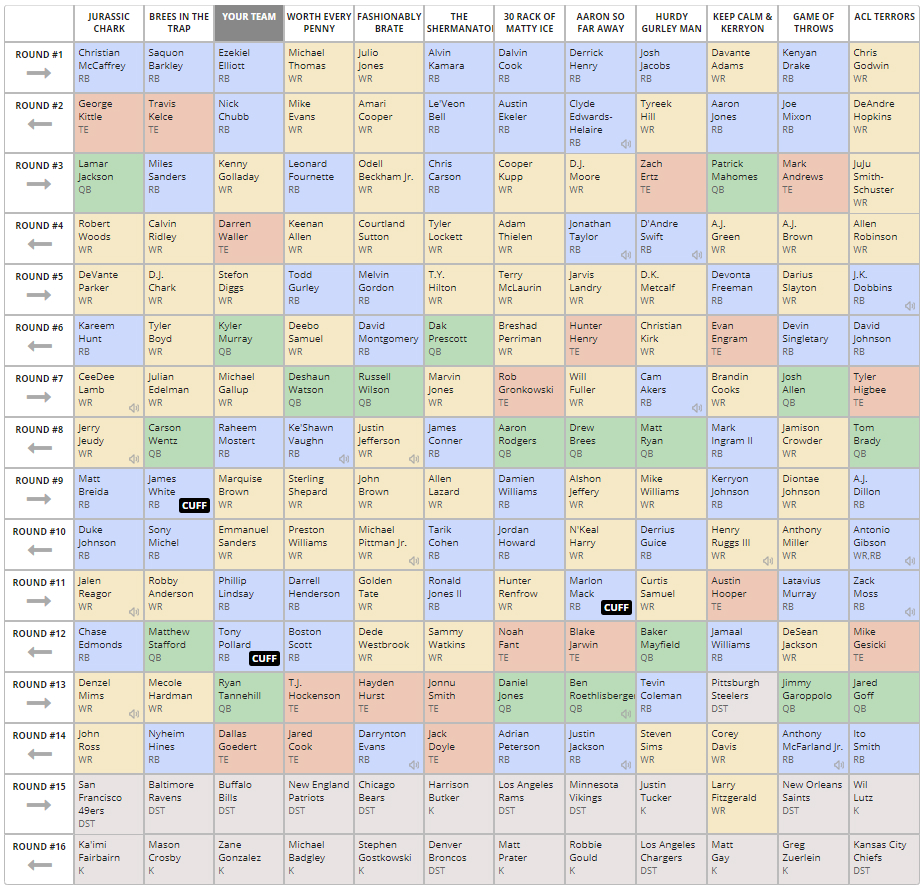 Joshua Lefkowitz is a featured writer at FantasyPros. For more from Joshua, check out his archive and follow him on Twitter @JLefkoNFL.

Fantasy Football Mock Draft: How to Handle the No. 1 Overall Pick (2020)