They also allow you to experiment with different draft strategies. You can punt running backs (Zero RB), wide receivers (Zero WR), quarterbacks (Late-Round QB), or tight ends by waiting until the middle rounds. While you won’t be able to rely on only streaming options at running back or wide receiver, you can employ a draft strategy where you do that at quarterback or tight end. And if your league still uses a D/ST or kicker, those are among the easiest positions to punt.

This year, FantasyPros is debuting a tool to help you stick to that strategy in your mocks. Just start up a draft, click the gear next to “Summary,” and choose your plan from the drop-down list. In this article, I’ll try out our streaming D/ST option for a 12-team PPR league with rosters of 1 QB, 2 RB, 3 WR, 1 TE, 1 WR/RB/TE, 1 D/ST and 6 BN. The client assigned me the seventh spot. Let’s see how this goes!

1.7 Alvin Kamara (RB – NO)
Kamara? At SEVEN? No way. I took him fifth with no questions a few weeks ago. I’m on the record about my love for Kamara in PPR formats, and I’m confident that he’ll top two of the running backs who went before him, Dalvin Cook and Derrick Henry. Kamara is a high-floor option with some upside, and he should finish as a high-end RB1.

2.6 Travis Kelce (TE – KC)
I’ll grab Kelce in Round 2. He’s the tight end with the highest yearly floor, and he’s a safe bet to finish top three at the position. Kelce has finished as the TE1 in the last four years, and he finished in the top ten in the two seasons before then. Sure, his second-round price tag is a bit much, but there’s no better way to secure a positional advantage on your league-mates than by taking Kelce.

3.7 D.J. Moore (WR – CAR)
I’m officially in love with this draft. Moore should earn a ton of targets in Joe Brady’s offense with Teddy Bridgewater, and I fully expect him to finish as a high-floor WR1. Moore is the youngest receiver who passes David Zach’s four-pronged test (early career production, true catch rate, first down rate, and completions over expected):

Wide Receivers that pass all 4 phases✅since 2015:

I’m stoked to get Moore as my WR1, and while I liked Robert Woods and Calvin Ridley, I’m more of a Moore fan.

4.6 Adam Thielen (WR – MIN)
I was bummed that neither Woods nor Ridley fell back to me. I don’t hate Thielen, but unlike both of those guys, I think he’s on his way out. Thielen turns 30 before this season starts, which limits his upside, but Mike Tagliere’s research shows that older players are still WR2/3 material. Before his disappointing, injury-plagued 2019 season, Thielen earned 153 targets in 2018 and 142 in 2017. There are fewer targets to go around in Minnesota’s run-heavy offense, but Stefon Diggs’ departure gives me hope for a rebound.

5.7 Stefon Diggs (WR – BUF)
Speaking of Diggs, I expect him to do well with Josh Allen. Buffalo receiver John Brown finished with the seventh-most air yards in 2019, and Diggs should beat him out for deep targets from Allen. But how did Diggs do last season? Well, only three receivers posted 1,400-plus air yards on fewer than 100 targets: Diggs, Mike Williams, and Robby Anderson. Brown finished as the WR20 last year, so Diggs pencils in as a WR2 as long as he can beat him out. I considered some higher-floor receivers here, but I wanted to add some pop to my lineup.

6.6 David Montgomery (RB – CHI)
I needed another running back. I’m not excited about Montgomery, but he finished with the 14th-most carries in 2019. He wasn’t particularly efficient with them, but Chicago didn’t make any moves to suggest that they’re replacing him. Montgomery is a volume-dependent RB2 in 2020.

7.7 Kareem Hunt (RB – CLE)
I grabbed Hunt as my flex in Round 7, and his PPR floor is dreamy. Over a full 16-game season, his 44 targets would’ve turned into 88. For some perspective, that’s only 20 fewer than RB4 Austin Ekeler, and it’s more than what Le’Veon Bell managed. New head coach Kevin Stefanski should feature both Chubb and Hunt in a run-heavy scheme, so I’m excited to land Hunt here.

8.6 Tarik Cohen (RB – CHI)
Because I waited until the sixth round for my RB2, I needed to take multiple guys to feel safe. Cohen is a low-risk option, as he’s logged finishes of RB30, RB11, and RB27 since he entered the league. He’s a volume-dependent PPR option, but there’s no indication that he’ll see less work in 2020. Oh, and if anything happens to David Montgomery, he’s a great replacement for him.

9.7 Golden Tate (WR – NYG)
Tate is another volume-based option that I like in PPR formats. The skilled slot receiver’s WR45 finish last year was his worst in a while (he had finished as no worse than WR30 since his WR39 finish in 2012), and I think he has a shot at getting back on track in 2020. Yes, he’ll have to compete with a crowded Giants receiving corps, but he’s got a resume of consistency and a low price tag. I’ll take that in Round 9.

10.6 Latavius Murray (RB – NO)
I invested a lot of draft capital in Alvin Kamara, and because I didn’t take an RB2 until Round 6, I felt like I needed to lock down his handcuff. The Saints have PFF’s second-best offensive line, and it’s a unit that Murray excelled behind last year  — he finished as the RB2 in Week 7 and as the RB3 in Week 8. It’s easy to take Murray because he gives me lots of security behind Kamara.

11.7 Matthew Stafford (QB – DET)
Stafford is one of my favorite late-round quarterbacks. The Lions quarterback was the QB6 on a points per game (PPG) basis from Week 1 to Week 9, and his entire supporting cast is returning for another season. Matt Patricia needs to win now to keep his job, and he’ll have to ride Stafford’s arm if he wants to do that. I also considered Rodgers here, but I have much more confidence in Stafford’s ceiling.

12.6 Curtis Samuel (WR – CAR)
With three high-floor options at receiver, I wanted another guy with a high ceiling at the position. Enter Curtis Samuel. He finished with the ninth-most air yards in 2019, and while he may have to compete for deep looks with Robby Anderson, that’s baked into his twelfth-round ADP.

13.7 T.J. Hockenson (TE – DET)
I only have six bench spots, so I planned to take either a TE2 or a QB2, but not both. Hockenson’s date with the Washington Football Club during Kansas City’s bye week makes him an appealing option. The 2019 first-round pick flashed TE1 upside in his NFL debut, and I think a full season with Stafford under center could help him finish as a TE1.

14.6 Parris Campbell (WR – IND)
Campbell is my last upside pick at receiver. Yes, the Colts just added Michael Pittman, but Campbell has elite speed and burst, and Philip Rivers has a better arm than Jacoby Brissett. The presence of Pittman and T.Y. Hilton means he’s nothing more than a matchup-dependent dart throw at WR3 or flex, but what else can you get in Round 14?

15.7 Kansas City Chiefs D/ST
Lastly, I landed the Chiefs’ defense in Round 15. When I consider a team’s defense, I first think about their offense — it’s counterintuitive, but you want your D/ST to be playing from ahead, not from behind, and that’s exactly where the Chiefs should find themselves for most of 2020. The Chiefs’ recent decision to pay Chris Jones only makes me more confident in this pick, as he should anchor their front seven.

The client ranks me first at tight end, fourth at flex, sixth at running back, sixth at D/ST, eighth at wide receiver, and last at quarterback. Even though I waited until Round 15 to get a team defense, I’m still in the top half of teams at the position. Also, my bench ranks sixth. 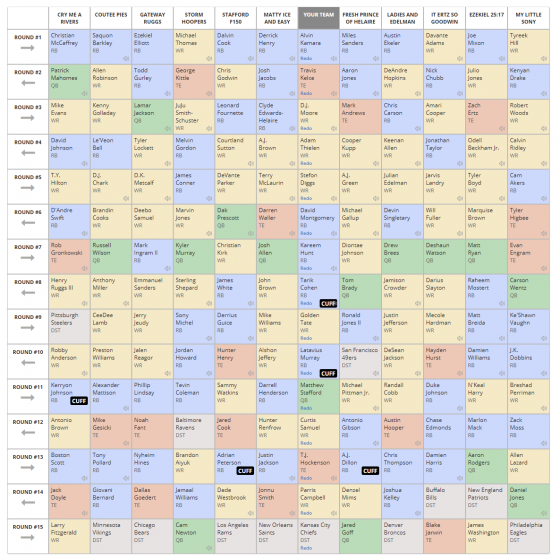