They also allow you to experiment with different draft strategies. You can punt running backs (Zero RB), wide receivers (Zero WR), quarterbacks (Late-Round QB), or tight ends by waiting until the middle rounds. And while you won’t be able to rely on only streaming options at running back or wide receiver, you can employ a draft strategy where you do that at quarterback or tight end.

Punting a position helps you secure an advantage at other positions. Tight ends are a safe bet to punt, as there’s not much variance in points per game after the first handful of guys. For example, the gap between the TE9 and TE21 was just 50 points last year. For some perspective, that’s the same gap between the TE1 and TE6.

This year, FantasyPros is debuting a tool to help you stick to that strategy in your mocks. Just start up a draft, click the gear next to “Summary,” and choose your plan from the drop-down list. In this article, I’ll try out our streaming tight ends option for a 12-team PPR league with rosters of 1 QB, 2 RB, 3 WR, 1 TE, 1 WR/RB/TE, and 7 BN. The client assigned me the seventh spot. Let’s see how this goes!

1.7 Dalvin Cook (RB – MIN)
I’m a bit surprised to see Cook fall this far. He finished as the RB6 in 2020 despite playing in only 14 games, and his 20.9 points per game (PPG) were second only to Christian McCaffrey. The Minnesota offensive line could be better, but he’s bound for solid fantasy production in Gary Kubiak’s offense. There are some concerns that he’ll hold out, so I’ll make sure to snag his handcuff later in the draft.

2.6 Austin Ekeler (RB – LAC)
So you’re telling me that I get to pair last year’s RB6 with the RB4? That’s nice. Unlike other high-end running backs, Ekeler’s fantasy success was based on volume, not touchdowns. Ekeler notched 224 touches in 2019, and 92 of them were receptions. While some are concerned that Tyrod Taylor will limit Ekeler’s production, I think that’s baked into his second-round price. I wanted a high-floor option after I landed Cook in the first round, so I found myself picking between Ekeler and tight end Travis Kelce.

3.7 Odell Beckham Jr. (WR – CLE)
Beckham disappointed in 2020. For a third-round price, I’m willing to forgive him. Why? Well, for starters, he had to deal with Freddie Kitchens. Second, he forced himself to play through some tough injuries. There’s some risk here, as new head coach Kevin Stefanski typically uses a run-first offense. But Stefon Diggs finished as the WR24 in his offense, and he posted five games with 100-plus yards even on minimal volume. I wanted some pop in my lineup, and that’s what I got in Beckham.

4.6 Robert Woods (WR – LAR)
If Beckham is the shot, Woods is the chaser. The skilled Rams receiver earned a whopping 139 targets in 2019 — the ninth-most in the league — and he finished as the overall WR14. Woods is bound for some positive touchdown regression, as he only scored twice last season, and Brandin Cooks’ 72 vacated targets could give him a boost in volume.

5.7 James Conner (RB – PIT)
I have mixed feelings about this pick. On the one hand, I think Conner has a higher ceiling at flex than the alternatives at this spot: David Johnson, Jonathan Taylor, and Tyler Boyd. On the other hand, there’s a lot of uncertainty surrounding Pittsburgh’s offense. I’m cautiously optimistic that Ben Roethlisberger’s return will cause the Steelers to channel their 2018 form, and that would be great news for that season’s RB6.

6.6 Russell Wilson (QB – SEA)
I usually wait to take a quarterback, but Wilson was too hard to pass up. He has finished as a QB1 in every season since entering the league in 2012, and there’s no reason to expect that to stop now. I love the consistency that he adds to my lineup, and he carries less risk than the other passers with rushing-based floor around this ADP.

7.7 Kareem Hunt (RB – CLE)
I grabbed my first bench player in the seventh round. I don’t have a WR3 or a TE1, but Hunt’s floor is dreamy. Over a full 16-game season, Hunt’s 44 targets would’ve turned into 88 — that’s just 20 fewer than Ekeler, and it’s more than what Le’Veon Bell managed. Because new head coach Kevin Stefanski should feature both Chubb and Hunt in a run-heavy scheme, I’m excited to land Hunt here.

8.6 Sterling Shepard (WR – NYG)
I got sniped. I wanted Crowder here because of his high target share, but alas, some things aren’t meant to be. So instead, I’ll take the other high-floor receiver in New York. Shepard earned 83 targets across just 10 games last season — that comes out to 132 over 16 games. That would’ve been 16th among all receivers, above guys like DeVante Parker, Davante Adams, and (get this) Jamison Crowder. The Giants invested heavily in the skilled slot receiver in 2019, so I’m comfortable taking him despite Golden Tate’s presence and Darius Slayton’s breakout.

9.7 Ke’Shawn Vaughn (RB – TB)
Do I like this pick? Not really. Does the client? Yes. Vaughn will serve as my RB5, and he’s got some upside as a pass-catching back with Tom Brady. The ex-Patriots quarterback targeted James White 95 times in 2019, and if Vaughn can seize that role, he’s bound for some solid weekly floor. And unlike White, Vaughn has a legitimate shot to take over Tampa Bay’s backfield with only Dare Ogunbowale and Ronald Jones to compete against.

10.6 Preston Williams (WR – MIA)
I wanted an alternate high-floor WR3, and that’s exactly what I got with Williams. He only started in seven games last year (he played in eight), but Williams managed to earn 60 targets. Since that equates to 120 over a full season, and because of how good Ryan Fitzpatrick looked with DeVante Parker last season, I see Williams as another reliable receiving option. I also considered Golden Tate, but I didn’t want to stack him with Shepard.

11.7 Alexander Mattison (RB – MIN)
I said that I was going to take Cook’s handcuff. I did.

12.6 Breshad Perriman (WR – NYJ)
Now that I’ve got three receivers whose floors I have faith in, I can grab another high-upside option. Perriman flashed his elite speed late last season, as he posted three games with 100-plus yards and four scores. He joins Sam Darnold in New York this season, and he pencils in as the Jets’ new Robby Anderson. He could get beaten out by Denzil Mims, but it’ll be hard for rookies to break out this season, so I like Perriman here.

13.7 Ben Roethlisberger (QB – PIT)
I wanted a QB2, so I doubled-down on the Steelers. I could’ve tripled-down on the Browns and grabbed Baker Mayfield, but I couldn’t bring myself to do that. Also, the Steelers take on the Browns during Seattle’s Week 6 bye, and I have much more confidence in Pittsburgh’s unit than Cleveland’s. Don’t forget that Big Ben posted a QB3 finish in 2018!

14.6 Hunter Renfrow (WR – LV)
I took my last high-floor receiver here in Round 14. Renfrow popped off late in last season, as he earned 6.4 targets and 5.0 receptions per game across his last seven showings. Yes, he’ll have to compete with new additions like Nelson Agholor, Bryan Edwards, and Lynn Bowden, but that risk is baked into his incredibly low ADP. I looked at some other slot receivers here, but I should be able to get one (or more) of them off waivers at some point if Renfrow doesn’t work out.

15.7 Blake Jarwin (TE – DAL)
It’s time to take my tight end streamer! I was surprised to see Jonnu Smith still on the board, but his Week 1 matchup with the Denver Broncos isn’t appealing. Honestly, it’s terrifying. I decided to roll with Blake Jarwin against the Rams in Week 1 despite my lack of confidence in his role. But since he’s just a streamer, I can drop him after Week 1 with no regrets.

The client ranks me first at flex, third at running back, fourth at quarterback, ninth at wide receiver, and last at tight end. Jarwin is (obviously) the worst TE1, and punting the position helped me secure enough depth to tie for the top-ranked bench.

Waiting to take a tight end until the late rounds won’t improve your other starters that much. Why? Well, you would’ve only taken one of them that early anyway. Depth is the upshot of this strategy, and since health will be more important for the 2020 season than ever, I strongly recommend it. 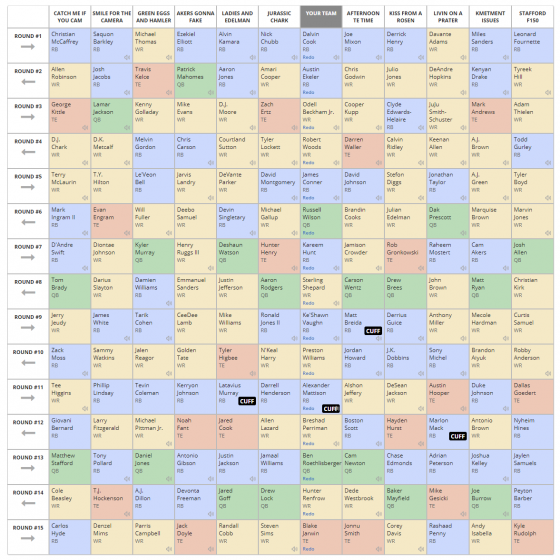