In this post we will be going through a mock draft I completed, using a 12-team league and giving myself the first overall pick. Check out some other recent mock draft posts we’ve done since we got the news about the 60 game MLB season starting in late July:

I want to really hone in on the scarce categories in this draft, and I’d like to end up projecting very well in steals and wins specifically. Starting pitching is going to be strange this season, and in the last mock draft I did, I avoided pitching for a little while and went with some middle and late-round high-upside guys to build my staff. In this mock, I would like to focus on getting some reliable veteran starters on my team early on.

I set up this league to have 24 starting slots (12 hitters, 12 pitchers). I left off the bench spots. Here are the full details:

1.1 Ronald Acuna (OF – ATL)
While Mike Trout is the safer play, Acuna gives me the towering upside than Trout can’t quite match given how he has slowed up in the running game in recent years. I really want to be competitive in steals, and the only sure fire way to do that is to address them early. Since I know I am going to take at least one pitcher in my next two picks, I went Acuna here to get me started.

2.12 Clayton Kershaw (SP – LAD)
While the age is very much a thing, I don’t have any worries about Kershaw being able to put up very solid numbers in 12 starts. The Dodgers will not have any games they can afford to lose with the standings sure to be tight all season, and Kershaw is just too crafty to let us down. He is one of the safer options here in my book, and I’m happy to have that security.

3.1 Shane Bieber (SP – CLE)
It was between Bieber and another stud hitter like Harper, but I really like what Bieber brings to the table. The Indians are the most generous team in the league in terms of giving their starters innings and high pitch counts. Bieber breezed through 200+ innings last year and should find his way into 10-12 very strong starts for the Indians. Now with an absolute stud hitter and two strong SP’s, I can focus on adding to my offense for a while.

4.12 Nelson Cruz (DH – MIN)
With Acuna and two pitchers off the top, I needed a run producer in my lineup. Not having to worry as much about health with just 60 games to cover, Cruz fits very nicely onto my squad. He even has the benefit of facing a pretty weak schedule.

5.1 Keston Hiura (2B – MIL)
One of the highest upside hitters in the league this year is Hiura, who could be right there with Acuna on a hard to match steals and homers pace if things go his way. I need to keep my foot on the gas with adding steals to my lineup, and Hiura helps me do that while covering a brutally shallow position and giving me upside in all categories.

6.12 Paul Goldschmidt (1B – STL)
Not a sexy pick, but I’ll take the veteran presence of Goldschmidt here. Veterans may have a bit of an advantage at the dish this year as their experience helps them adjust a bit to the strange off-season.

7.1 Matt Chapman (3B – OAK)
I wanted another reliable bat to bring me some good batting average and homer/RBI upside. Chapman fills the hole at third base very well and will even get some games in at Coors Field this year.

Also considered: Victor Robles (OF – WAS)

8.12 Oscar Mercado (OF – CLE)
Steals, steals, steals. Mercado brings those to the table, as well as having some nice batting average and power upside.

9.1 Brandon Woodruff (SP – MIL)
Eights rounds in with just two pitchers, it was time to grab another. Woodruff makes a nice addition with his huge strikeout upside, and he gets a bit of a boost from where we first ranked him since the innings questions are no longer an issue.

10.12 Max Kepler (OF – MIN)
I found myself a bit behind in runs scored and homers, and Kepler checks both of those boxes nicely. I love that Twins lineup, and I love that Twins schedule – so I’ll take as much exposure as I can get.

11.1 Eduardo Rodriguez (SP – BOS)
I needed a large volume of strikeouts in a hurry, and E-Rod gives me that while also potentially being elite in wins.

12.12 Raisel Iglesias (RP – CIN)
While I do not expect to draft many teams that will be at the top of the league in saves, I don’t want to punt the category either. The Reds should be a very competitive team this season as they get to play a bunch of games against the Pirates, White Sox, Royals, and Tigers – so I’ll take the save opportunities for Iglesias.

13.1 Julio Urias (SP – LAD)
Starting pitcher is really thin at this point in the draft, so I wanted to grab another starter before my long string of not having a pick went by again. Even in a 60-game sample, you should really expect the Dodgers to have a great record, which gives Urias a nice boost over some of the other options that were hanging around.

14.12 Jake Odorizzi (SP – MIN)
The Twins’ pitching schedule is even better than their hitting schedule, which is really the only reason I’d consider Odorizzi. Getting a couple starts against the Tigers is good enough to move him wildly up my rankings, and there really isn’t a single elite offense he will have to face this year. Twins pitchers should feast.

15.1 Amed Rosario (SS – NYM)
Rosario quietly had a very strong season last year, hitting for a great batting average while stealing bases at a fine rate. Hopefully he can find a few hot streaks for me this year and get some extra steals opportunities. I did not have a shortstop at this point either, so this was a nice guy to get.

16.12 Khris Davis (DH – OAK)
You better believe Khris Davis is primed to take the Comeback Player of the Year award after he had a train-wreck of a 2019 season while he dealt with injury. If anybody can hit 20+ bombs in 60 games, it’s Khrush.

17.1 Ian Kennedy (RP – KCR)
Having two relievers with set in stone closer jobs is probably enough to get by in 2020, so that’s what I’m doing here with Kennedy. If I waited another turn, there may have been no closers left.

18.12 Garrett Richards (SP – SDP)
If Richards makes his usual six starts and they’re all quality, he will be a very good fantasy pitcher this year. I promise you this is the last year I’ll try this, but let’s go out with a bang! 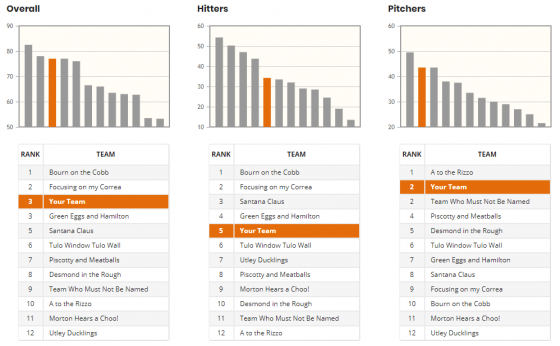 Solid showing here, the Kershaw/Bieber duo at 2-3 propelled me to having a top two pitching staff despite me kind of neglecting the staff the rest of the way home. I ended up strong in homers and RBI, average in runs and steals, and absolutely horrible in batting average. All-in-all, this is a fine team that would have a good shot at taking the crown.