Now that the seeding games have concluded, the West is left with two teams vying for the eighth and final playoff spot: the Memphis Grizzlies and the Portland Trail Blazers. Portland holds the No. 8 seed and will need to win Saturday against Memphis to advance to the NBA playoffs. For Memphis to overtake Portland, it will need to win Saturday to force a game Sunday and win that contest as well. This will be the only matchup on Saturday’s slate, and FanDuel is offering a single-game contest to keep the DFS fun going over the weekend.

For single-game contests, you’ll get $60,000 to spend on five players: MVP (2x value), STAR (1.5x value), PRO (1.2x value), and two utility (UTIL) players without multiplier bonuses. Today, I’ll be offering my favorite picks for the multiplier positions, money-saving options, and general strategy for this contest. With an over/under set at 232.5 and a trip to the playoffs on the line, this one is sure to be exciting and full of offense. No more stalling, let’s get to it!

Damian Lillard (POR): $16,500
Hard to bet against Dame in this pivotal matchup. He should be the most popular MVP option, and it’s wise to go with the crowd or risk falling out of contention. Over his last six games, he’s gone off for 40.3 points, 8.7 assists and 4.5 boards while draining over six triples per contest. Portland has been on the brink of elimination for its last four games, and Lillard has shined. He has a great chance to keep up the hot streak Saturday, as a win for Portland punches its ticket to the postseason and a first-round matchup with LeBron James.

Jusuf Nurkic (POR): $14,000
Nurkic looks like he hasn’t missed a beat, as he made his season debut in the Orlando bubble. The big man kicked off the festivities with three straight games of at least 55 FD points and has scored at least 40 FD points in six-of-eight contests. Memphis is only average against opposing centers, and without Jaren Jackson in the fold, the matchup isn’t scary for Nurkic. If you’re looking to pivot off of Lillard for MVP, Nurk makes a fine play, or you can stack the two at MVP and STAR.

Ja Morant (MEM): $13,500
Unsurprisingly, Morant has played big minutes for Memphis in the bubble, doing it all as the unquestioned leader of the team. In eight seeding games, he’s averaged just under 10 assists per contest to go with 19 points and over six boards. He’s failed to surpass 30 FD points only once and gone for at least 42 FD points in four-of-eight games. He can arguably be used as your STAR over Nurkic, and there’s no harm in swapping the two between STAR and PRO based on preference.

C.J. McCollum (POR): $13,000
McCollum is dealing with a back issue, though you wouldn’t know it based on his performance in Thursday’s crucial victory over Brooklyn. In the must-win matchup, McCollum went off for 50.3 FD points, his most in the bubble. There’s room for both he and Lillard to have big games, and McCollum is another guy who could slot into your STAR spot if you feel so inclined.

Jonas Valanciunas (MEM): $12,500
Valanciunas has 60-point upside, though he’s more of a 32-40 FD point guy, which means that if you decide to play him, he should be your PRO and not your STAR. He went off for 66.8 FD points against Milwaukee on Thursday, though he did so against a team missing Giannis Antetokounmpo and limiting the minutes of its starters. Otherwise, JV topped out at 40.1 FD points against New Orleans on August 3. The upside of Nurkic, Morant, and McCollum make all three better options at STAR.

Carmelo Anthony (POR): $10,000
Melo has been huge for Portland’s success in the bubble, and the slimmed-down forward has shown that reports of his demise were greatly exaggerated. He’s certainly liable to put up a 20-point dud, but he’s scored at least 30 FD points in five-of-eight bubble games, including 43.6 Tuesday at Dallas.

Hassan Whiteside (POR): $9,000
Whiteside has been relegated to the bench, but he doesn’t need a lot of minutes to rack up significant fantasy points. Over his last two contests (both off the bench), Whiteside has totaled 64.4 FD points in just 33 total minutes of action. It will be hard for him to maintain a pace of almost two FD points per minute, and his playing time is uncertain, but at $9K, you’re looking for a guy who can get you 25-30 FD points, which is something Whiteside is more than capable of doing.

Gary Trent (POR): $8,500
Trent has played minutes well into the 30’s throughout the bubble games, and he’s been dangerous from three-point range. There is a little risk for a dud, but Trent’s floor has been fairly steady as of late, and he’s shown a 40-FD point ceiling. If you’re going to get Lillard and other big names into your lineup, you have to spend down elsewhere, and Trent has some of the highest upside among the low-cost options for this game.

Grayson Allen (MEM): $8,000
Allen has seen his role expanded significantly since entering the bubble, and it appears he’s past the injuries that hampered him early in the season. He doesn’t offer much outside of scoring, but he’s a three-point specialist able to put up some productive scoring lines if he’s feeling it from deep. He’s scored at least 22 FD points in five of his last seven contests.

Anthony Tolliver (MEM): $6,000
Tolliver is the only bottom-priced guy I’m taking a chance on in this contest. His upside is minimal, but he’s scored at least 14 FD points in four of his last five contests, seeing additional work with Jaren Jackson out of the lineup. While 14 FD points might not seem like much, it’s the best you’ll get at this price range, and the $6K salary allows you to get three of the highest-priced options as well as someone like Carmelo Anthony or Hassan Whiteside. Tolliver faces his former team, so there’s a revenge-game narrative to keep in mind, too.

I’m paying up for Lillard as my MVP for this contest, even though it means going chalk. He’s playing too well right now to fade, and doing so could cost you a cash for this contest. For the STAR and PRO positions, there are two options to consider. First, fade Jusuf Nurkic and select two of C.J. McCollum, Ja Morant, and Jonas Valanciunas. That will leave between $17K and $18K for your final two roster spots, allowing you to pair Carmelo Anthony or Hassan Whiteside with someone like Grayson Allen.

You can also go for the Lillard/Nurkic stack, add in Ja Morant (or C.J. McCollum) and Carmelo Anthony and finish out the roster with Anthony Tolliver way down at $6K. As mentioned above, Tolliver doesn’t offer much upside, but double-digit points and the budgetary freedom to play all of the four guys listed before him is a big deal. The first strategy is a little less risky because of the overall value of every player, but the difference in scoring from Tolliver to someone like Grayson Allen isn’t enough to sway me.

I’m stacking the deck and going with the second strategy for a final lineup that looks like this: 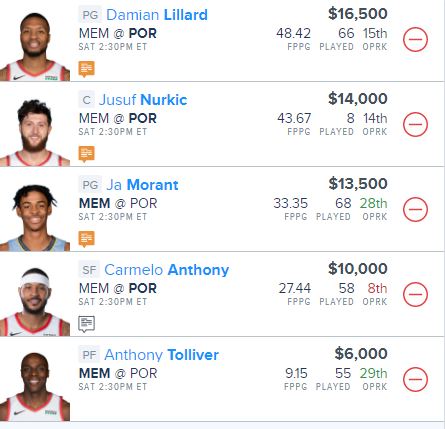 Beyond our daily fantasy basketball content, be sure to check out our Daily Fantasy Basketball Tools. From our Lineup Optimizer – which allows you to build winning DFS lineups in seconds for Cash and GPP contests – to our DFS Cheat Sheets – that helps you get a quick read on the day’s players – we’ve got you covered this fantasy basketball season.