After an exciting Week 1, we’re on to Week 2. This week brings us what should be a high-scoring affair between Dallas and Atlanta — in addition to a battle of backups between San Francisco and the New York Jets.

As we get ready for Week 2, let’s break down FantasyPros’ projected ownership numbers!

These figures are generated based on player ownership figures in full slate contests. 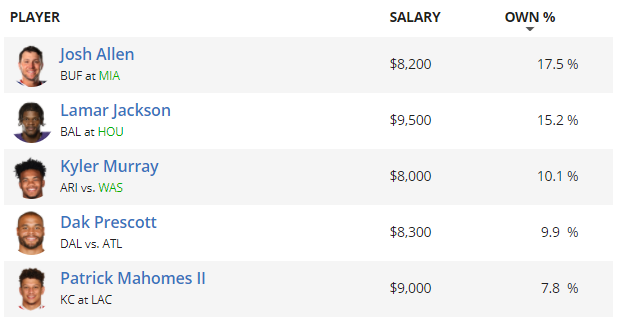 Josh Allen could be the most popular quarterback play on FanDuel this weekend. He takes on Miami’s beatable defense, but I wouldn’t be surprised to see the Bills shift away from a pass-heavy game script if they get out to an early lead. They didn’t last week, but they probably wanted the passing-down reps in lieu of a preseason. Lamar Jackson should be another popular choice. Mahomes just torched the Texans in Week 1, and Jackson should be able to do the same. While he’s also got the highest salary of any quarterback, he’s incredibly difficult to fade. Kyler Murray is the last guy above 10 percent, and he should be able to counter Washington’s brutal front seven with his speed. Dak Prescot and Patrick Mahomes round out the list, and of the two, Prescott’s the better option against Atlanta’s vulnerable secondary. 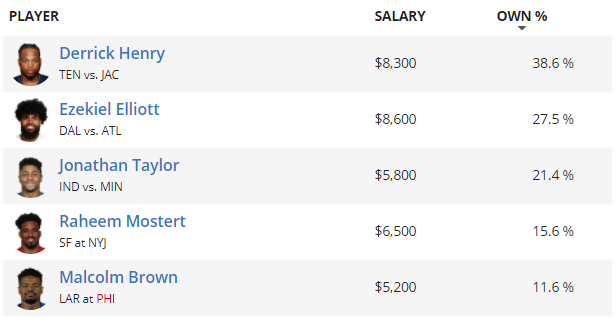 Derrick Henry is close to chalk this week, so you should start him cash leagues and bet against him in tournaments. He’s the best play on the slate due to Jacksonville’s spotty rushing defense and the complete lack of alternative rushers on this roster. With Darrynton Evans hurt, Henry is a safe bet to see maximum volume. Both Ezekiel Elliott and Jonathan Taylor figure to be other popular picks, and I’m fans of both of them. That said, Taylor’s salary will let you target studs elsewhere, and I’d expect him to be closer to chalk come kickoff on Sunday. He’s got a good matchup and is in a great situation as the starter. Raheem Mostert should be a popular play against the Jets, but honestly, I wouldn’t be surprised if San Francisco gets out to a big lead and pulls him. Tevin Coleman and Jerick McKinnon could have some value here as game-script dependent plays. Malcolm Brown draws a tough matchup with the Eagles, but the’s the leader of this committee, and he just needs one goal-line touch to go his way to hit value. 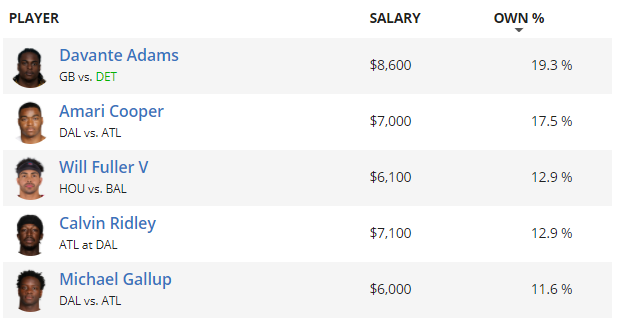 While Michael Thomas is out, Davante Adams should inhabit this spot every week. Detroit won’t have CB1 Desmond Trufant this week, so he’ll play against either a mediocre veteran (Amani Oruwariye) or an unproven rookie (Jeff Okudah). He’s a safe bet to blow up, and Adams might just be chalk this week. Dallas’ Amari Cooper seems to have an advantage over Michael Gallup and CeeDee Lamb (to be fair, it’s a one-game sample size), so he’s a screaming value at just $7,000. If he sees the same volume he did last week against a cornerback not named Jalen Ramsey, he’ll have a huge day. Will Fuller offers an interesting mix of floor and upside — he’s in a high-volume role with Hopkins gone, yet he still has the speed to go deep. Calvin Ridley and Gallup wrap up the list, and they’re both high-upside picks in what should be a pass-heavy matchup

There’s no clear-cut chalk option this week at tight end. The two salary leaders, Travis Kelce and Mark Andrews, should be popular picks due to their volume. While Kelce gets far more targets than Andrews, Andrews is a prolific scorer, and Lamar Jackson tends to prioritize him in the red zone. Both of the Eagles’ tight ends, Dallas Goedert and Zach Ertz, crack this list, and that’s not surprising with their lack of depth at wide receiver. Both of them make viable plays with how often Philadelphia runs 12-personnel (2TE sets). Hunter Henry concludes the list, and if Tyrod Taylor continues to favor him like he did last week, he’ll make a strong addition to any lineup. 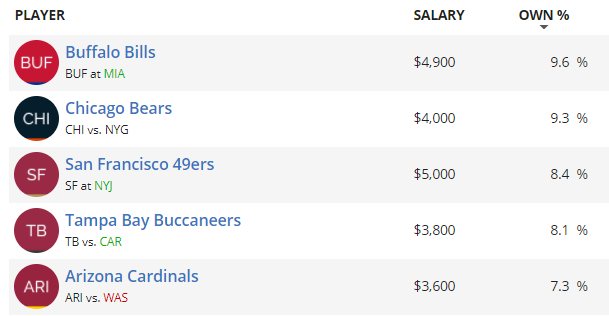 The Bills should not be the No. 1 option this week. They’re down two of their starting linebackers, Tremaine Edmunds and Matt Milano, so consider that before you throw them in your lineup for $3,900. Likewise, the Bears could be without one of their best pass rushers on Sunday, as both Khalil Mack and Robert Quinn are questionable. While I expect Mack to play, I’m less sure about Quinn, and the Bears only notched one sack without him last week. The 49ers a great pick this weekend, and that’s even with Richard Sherman on injured reserve. Sam Darnold won’t have two of his best playmakers in Le’Veon Bell and Jamison Crowder, and that will limit New York’s ability to score. The Buccaneers and Cardinals round out this list. While Tampa Bay’s rushing defense has been great, their secondary could struggle against Joe Brady’s offense. That said, it could be worth the risk, given their low price. Arizona costs very little this week, too, and their matchup against sophomore signal-caller Dwayne Haskins has some appeal, too.