In pop culture vernacular, autumn and winter months represent “cuffing season,” which, for the unfamiliar, is defined by Urban Dictionary as “the cold season when everyone’s cuddling up, so you settle for a new boyfriend/girlfriend way below your standards.”

According to FantasyPros’ ADP report, four running backs drafted among the top 15 at their position have missed or will miss significant time in the coming months, meaning depth at the position is more important than in past years, especially with the looming weekly threat of COVID-19 infecting locker rooms.

Running backs are always valuable trade assets in fantasy leagues, but given the rash of injuries and postponements we’ve seen over the past couple weeks, the most prudent approach for now is to hold on to even low-end RB2s such as David Montgomery unless a league mate offers a Godfather-level trade that can’t be refused.

For this edition of “By the Numbers,” we’ll check in on some of the aforementioned handcuffs, as well as a few other running backs who could be playing meaningful fantasy snaps moving forward.

In addition to this piece, be sure to check out the rest of Week 4’s numbers to prepare for Week 5 with our target analysis and notable snap count rundowns.

Among running backs with at least 30 carries, Kareem Hunt and Mike Davis are tied for first in the NFL with 3.7 yards after contact per attempt.

Over the past two weeks since taking over as Carolina’s lead back for the injured Christian McCaffrey, Davis has averaged 19.4 half-PPR points per game, which ranks fifth at the position.

While Davis’ value will soon plummet with the likely return of McCaffrey from IR in Week 6, Davis has proven his worth as a high-end handcuff in the Panthers backfield.

Hunt, meanwhile, saw his fantasy stock skyrocket over the weekend after starter Nick Chubb suffered a knee injury that will likely sideline him for the next six weeks.

On the season, Hunt is the half-PPR RB7, averaging 16.4 points per game.

Coming into the season, the Miami Dolphins backfield was thought to be an equal time share between Matt Breida and power back Jordan Howard.

Instead, 2019 seventh-round pick Myles Gaskin has emerged to lead his team in rushes (48) and running back targets (20), the latter of which ranks sixth at the position in the NFL.

Through four weeks, Gaskin has played 66.9 percent of the Dolphins’ offensive snaps, good for 11th among running backs.

Although Howard holds a significant team lead in carries from inside the 5-yard line, Gaskin’s usage should remain steady, making him a solid flex play moving forward.

Despite a strong first couple weeks spelling Austin Ekeler in the L.A. Chargers backfield, rookie running back Joshua Kelley has struggled from an advanced analytics standpoint, as he ranks last among 34 qualified running backs in Football Outsiders’ DVOA metric.

With Ekeler likely hitting the I.R. for at least the next four weeks, many fantasy managers have tabbed Kelley as the Chargers’ go-to handcuff, but Justin Jackson, who’s available in more than 90 percent of ESPN and Yahoo leagues, may be the smarter investment.

Over two career seasons, Jackson has averaged 4.8 yards per carry, and profiles as more of a receiving complement to the short-yardage specialist Kelley.

Week 5 will provide more insight into the duo’s usage moving forward, but it wouldn’t be surprising to see Jackson leading Kelley in fantasy points by the time Ekeler comes back, especially in full-PPR leagues.

Rookie Washington running back Antonio Gibson is tied with Josh Jacobs for the league lead in broken tackles with 12, which is extremely impressive considering Gibson’s accomplished the feat despite totaling 39 fewer carries than Jacobs. 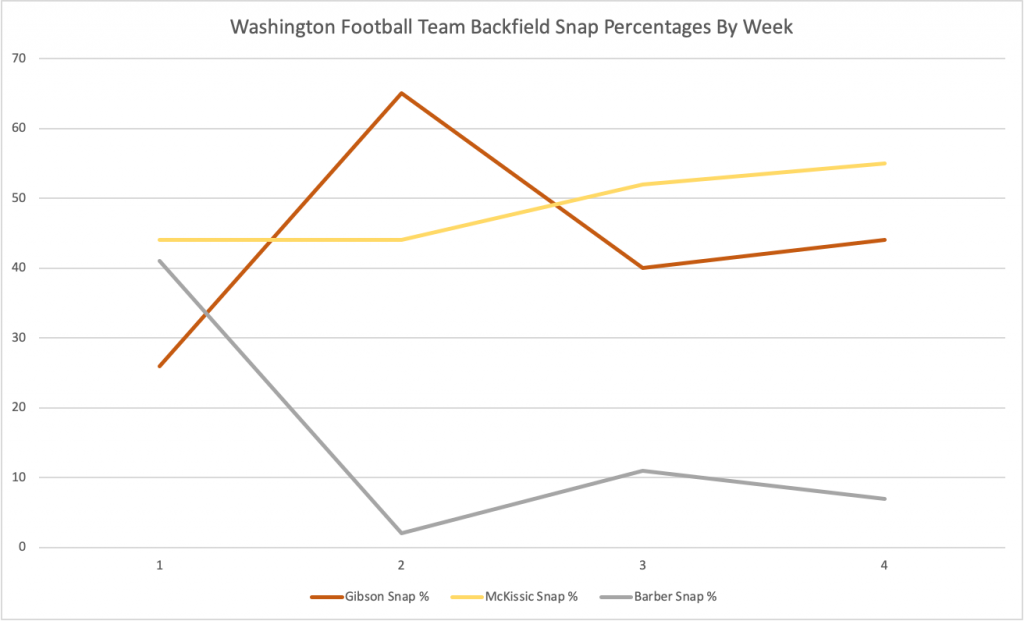 After playing only 26 percent of Washington’s offensive snaps in Week 1, Gibson has seen his season-long offensive snap percentage creep up to 43.4 percent, and in Week 4 he capitalized on the usage with a 17-touch, 20.8 half-PPR performance.

While J.D. McKissic is still a factor in Washington, it’s very possible Gibson could take over the starting gig sometime in the next few weeks, which would make him a strong RB2 candidate for the rest of the season.

In 2018, running back Jerick McKinnon signed a four-year, $30 million contract with the San Francisco 49ers, which at the time made him one of the highest-paid running backs in football.

Speaking shortly after the signing, head coach Kyle Shanahan was effusive in his praise of McKinnon, going as far to say his tape was as good as the coaching prodigy had seen.

Unfortunately for the 49ers, McKinnon suffered a torn ACL early that season and missed the entire 2019 campaign after experiencing setbacks from his knee surgery in training camp.

Flash forward to 2020 and things are finally starting to click for McKinnon, who is averaging 16 half-PPR points over the two games since starter Raheem Mostert went down with a knee injury in Week 2.

Although Mostert has been electric since breaking out with the 49ers last season, McKinnon has shown enough to maintain a significant role in the backfield even when Mostert returns from injury, making the $30 million man a low-end flex play in deeper leagues for the foreseeable future.