If you play in redraft leagues, I’m sorry if you lost Dak Prescott and Dalvin Cook last week — injuries are always tough to navigate in weekly formats. Fortunately, DFS is always an option, so I would check that out if you’ve since given up on your 0-5 roster. 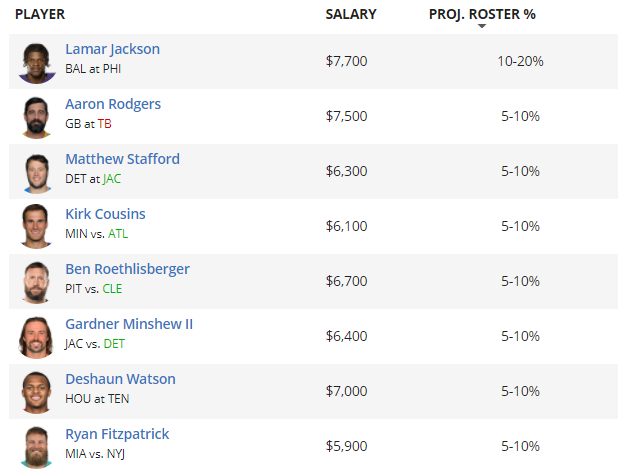 Oh boy, I love telling people that they’re wrong. Lamar Jackson is projected to be the most popular play at quarterback this week, except he’s a terrible start. Not only has he been struggling, but you can also get better alternatives at much lower costs.

Consider Matthew Stafford. His opponent, the Jacksonville Jaguars, surrender the sixth-most DraftKings points per game to the position (DKPPG), and he’s $1,400 cheaper! The other smart alternatives in his price range to appear on this list include Kirk Cousins, Ben Roethlisberger, Gardner Minshew, and Ryan Fitzpatrick.

If you must sink lots of your cap space into choosing a signal-caller, you won’t be alone if you roll with Aaron Rodgers or Deshaun Watson. Despite questionable matchups (TB ranks fourth-best against QBs, and TEN ranks 15th-best), the two players have dramatically higher ceilings than their discount counterparts. 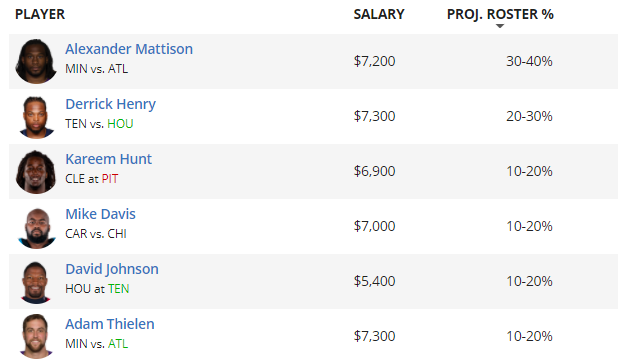 Alexander Mattison is chalk this week. Bet on him in cash leagues, and consider betting against him in tournaments. His popularity is almost certainly what’s keeping this list so small — he is primed for Dalvin Cook-like production at a reasonably affordable salary.

The next guy up, Derrick Henry, is the only player in the 20-30% range. That’s not quite chalk, but it’s close to it. His popularity should come as no surprise — the Texans have struggled against running backs all season long, and the team is giving up the sixth-most DKPPG to running backs. That said, most of the damage took place during Bill O’Brien’s tenure and against the Ravens, Steelers, Chiefs, and Vikings, all of whom got out to sizeable leads and ran out the clock. The Texans limited James Robinson to just 70 yards on 18 touches, so Henry isn’t guaranteed to produce.

Two backs close to the $7,000 price range, Kareem Hunt and Mike Davis, finish off this list along with the bargain-bin David Johnson. I don’t like Hunt against Pittsburgh’s third-best defense against running backs, and Davis’ matchup with the 11th-best Bears isn’t appealing, either.

Adam Thielen is the only wide receiver or tight end to make this list, and I’m expecting him to be closer to chalk by game time. Mattison’s rostership may limit Thielen’s usage due to people not wanting to stack a wide receiver and a running back, but the wideout is a fantastic play against Atlanta’s secondary nonetheless. 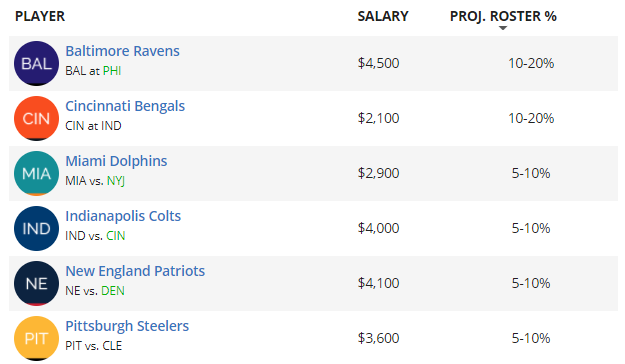 Six defenses cracked the list this week, and they’re led by the Baltimore Ravens and the Cincinnati Bengals. Baltimore will take on the struggling Carson Wentz, who is turning the ball over twice per game. Coincidentally, the Ravens are forcing two turnovers per game,  so it’s safe to project them for many fantasy points. The only question is whether you want to sink a ton of your salary cap into them.

The bargain-bin Bengals slot in right behind them against the Colts, and honestly, I really like this pick. The Colts average just 25 points per game and rank eighth in time of possession. This should be a low-scoring game, and the Bengals’ defense could be fantasy-viable as a result.

The Dolphins. Colts, Patriots, and Steelers all qualified for the bottom slots on this list. Aside from the Steelers, they’ll all take on struggling offenses, and all could be viable plays that cost you a bit less than the Ravens will. That said, if you’re going to spend big at defense, I would just bet against Wentz.

Players to Be Thankful For in 2020 (Fantasy Football)