How is your team doing in redraft? 5-0? 4-1? At least 3-2? If you answered “yes,” to any of those questions, congratulations! If not, hope isn’t lost — everyone loves a comeback story. That said, if things have really fallen off the rails for your team, check out DFS! It’s a great way to stay involved in the action even if your redraft season has come to a premature conclusion. 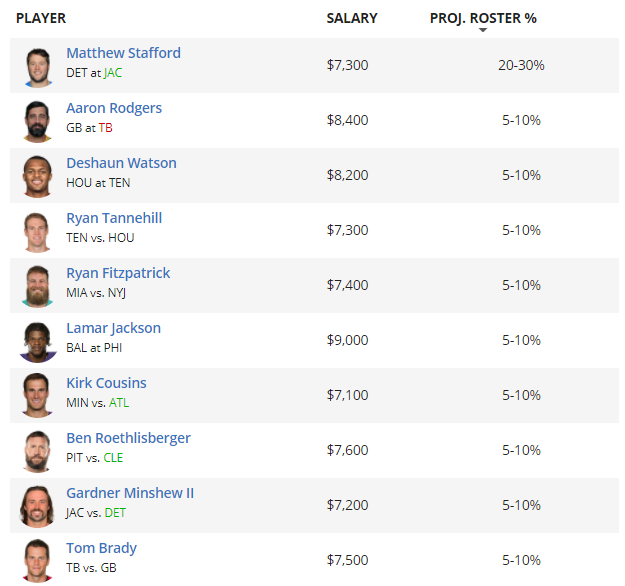 Matthew Stafford is chalk this week. Bet on him in cash games, bet against him in tournaments. His chalk status makes sense — the Jaguars surrender the seventh-most FanDuel points per game to the position (FDPPG), and he’s very affordable.

We have a long list of names after Stafford who should be reasonably popular options as well. Aaron Rodgers, Deshaun Watson, and Lamar Jackson all cost you a good bit of change, but all of them (except Jackson) could be worthwhile plays if you want to avoid Stafford. As for bargain-bin plays, Ryan Tannehill, Ryan Fitzpatrick, Kirk Cousins, and Gardner Minshew should all be relatively popular and similar price points. Matt Ryan is notably absent from this list. 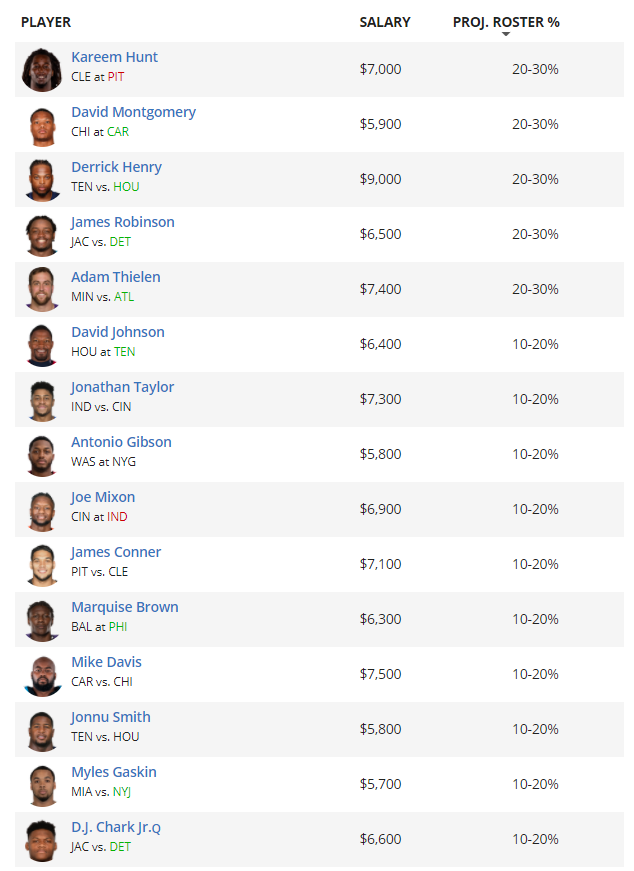 Alexander Mattison may not grace these charts yet, but he will be chalk this week now that we know Dalvin Cook is out. Book it.

We’ve got some clear favorites at the running back position — Kareem Hunt, David Montgomery, Derrick Henry, and James Robinson should find themselves close to chalk in Week 6. All of them, except Hunt, have good matchups. I’m not quite sure why Hunt is so popular; the Steelers give up the fourth-fewest FDPPG to running backs. That said, I’m all-in on these other options. Montgomery’s opponent, the Panthers, surrender a league-high 31.7 FDPPG to the position. The Texans (26.2) and Lions (30.6) are also bad against running backs, although to a lesser extent.

In the 10-20% range, we have two kinds of running backs — lower-end RB1s (Joe Mixon, Jonathan Taylor, James Conner, Mike Davis) and reliable RB2s (David Johnson, Antonio Gibson, Myles Gaskin). I won’t comment on every player here, but I will say that I have a lot of faith in Gaskin, and I’d recommend playing him in cash leagues. I would avoid Taylor, Gibson, Mixon, and Davis at these prices, but Johnson isn’t a bad play against Tennessee.

Very few wide receivers make an appearance here. Only Adam Thielen graces the 20-30% range, and he’s in a smash spot against Atlanta’s putrid secondary. He’s a lock for a strong week, and as with all chalk, start him in cash leagues and bet against him in tournaments.

Marquise Brown and D.J. Chark are the only other receivers to make the cut. Brown is a boom-or-bust play who could get phased out of a game if the Ravens get ahead early, which they should do against the Eagles, so keep that in mind before you commit to him. Chark is questionable (and his status is in serious doubt). Pivot to Laviska Shenault if Chark can’t play.

Only one tight end makes the list this week: Jonnu Smith. That makes sense, as the Chiefs’ Travis Kelce and the 49ers’ George Kittle aren’t on the main slate. Smith ranks as the TE3 despite playing in one fewer game than most of his competition, and if he can keep this production up, he’ll have high-end TE1 pricing by the end of the year.

Only three defenses cracked the list this week, and only one of them lands in the 10-20% range. That honor goes to the Baltimore Ravens against the struggling Carson Wentz. The Ravens are forcing two turnovers per game, and Wentz is turning the ball over twice per game, so it’s safe to project the Ravens for a bunch of points. The only question is whether you want to sink a ton of your salary cap into them.

The Giants and Colts are two popular Baltimore alternatives here, but I don’t like either of them. Why? New York’s own offenses can’t be trusted to hold onto the ball, and that may give the Football Team some easy scoring opportunities. And some of the Colts’ best defensive playmakers are struggling through injuries — star linebacker Darius Leonard is doubtful, and key pass-rusher Justin Houston is questionable.