If you drafted Odell Beckham in redraft this year, well, you know the frustrations that injuries can cause. While you may not be as competitive without him, you don’t have to worry about those kinds of consequences in daily fantasy sports (DFS). So if you find yourself with some extra time on your hands because of your uncompetitive redraft roster, why not give FanDuel a spin? 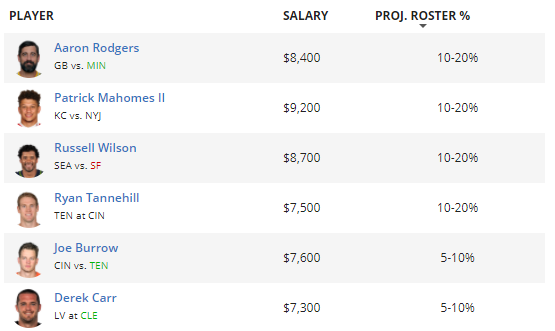 We don’t have any chalky options at quarterback this week, although we do have a quartet of popular picks. Aaron Rodgers, Patrick Mahomes, and Russell Wilson should be featured in a double-digit share of lineups despite their high salaries. Ryan Tannehill should be as well, albeit for a lower price.

I’m a big fan of both Rodgers and Tannehill here — both have easy matchups (the Vikings won’t have three of their best cornerbacks). The Jets aren’t a stout matchup, but there’s a chance that Mahomes won’t have to throw much against them, while even Wilson may struggle against San Francisco’s defense.

Two other options earned spots on this list, although they’re unlikely to be as popular. Joe Burrow will take on the Titans’ unremarkable passing defense, and it has the makings of a shootout — the game has the third-highest projected point total on the slate. Derek Carr could have a big day against the Browns, too, and he’s been throwing further downfield than usual without sacrificing his accuracy. 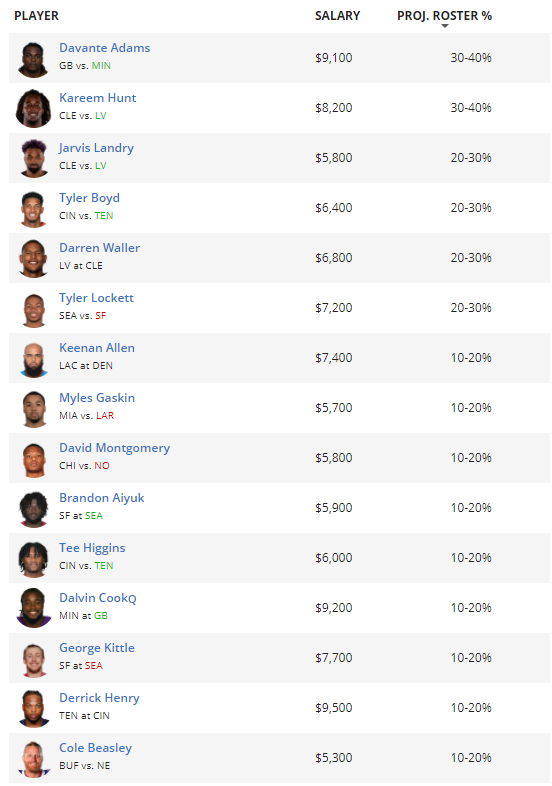 NOTE: Alvin Kamara is such a popular play for Week 8 that he caused an error with our tool. It expects him to be rostered in 40%+ of lineups.

Kamara is chalk. You should start him in cash leagues and bet against him in tournaments. Although the Chicago Bears are a formidable opponent, they give up the most explosive plays to running backs in the NFL, and the Saints won’t have Michael Thomas.

Behind him, both Kareem Hunt and Davante Adams should be close to chalk. Their respective offenses should lean on them this week — Hunt will get tons of carries against an embarrassingly bad rushing defense, and Adams will get a ton of opportunities with Aaron Jones sidelined and the Vikings’ secondary greatly banged-up.

Some other notable names check in the 20-30% range: Jarvis Landry, Darren Waller, Tyler Boyd, and Tyler Lockett. Landry feels like a misread, as even though Odell Beckham is done for the year, Rashard Higgins and Donovan Peoples-Jones outpaced him in air yards last week. Waller and Boyd should be great high-volume options in high-scoring games, while picking Lockett at his price point feels like chasing points.

Of the names remaining, look for Dalvin Cook’s rostership to jump (or plummet) once his status is made official. Brandon Aiyuk should be a more popular play this week, and he is one of my value picks this week.

We don’t have much consensus at defense this week. The high-priced Chiefs should be popular against the Jets, but that should surprise no one because they’re the Jets. That said, starting a defense against the Jets always runs the risk of garbage-time points.

The Saints and Packers should also be popular, as both of them will take on low-scoring opponents. However, the Packers won’t have CB2 Kevin King, and that could leave Justin Jefferson or Adam Thielen open on some plays.