There were two plays dissected and discussed relentlessly following the New York Giants’ loss to the Philadelphia Eagles this past Thursday night. The first was Daniel Jones’s eighty-yard-run-and-stumble. The second was a critical drop by Giants tight end Evan Engram on third-and-six with just over two minutes to go in the game — a play that, if converted successfully, would have allowed New York to virtually run the clock out.

The former was fun to talk about, but it was inconsequential to the game’s outcome.

The latter was consequential — but, I’d argue, not as significant as a play that came one minute before it.

Leading by a score of 21-16 and with 3:49 remaining in the game, New York had a first-and-ten at their own 34-yard line. Giants running back Wayne Gallman took the handoff from Jones and ran up the middle for nine yards. For those watching at home, it was clear that Gallman was short of the line to gain — even in real-time. 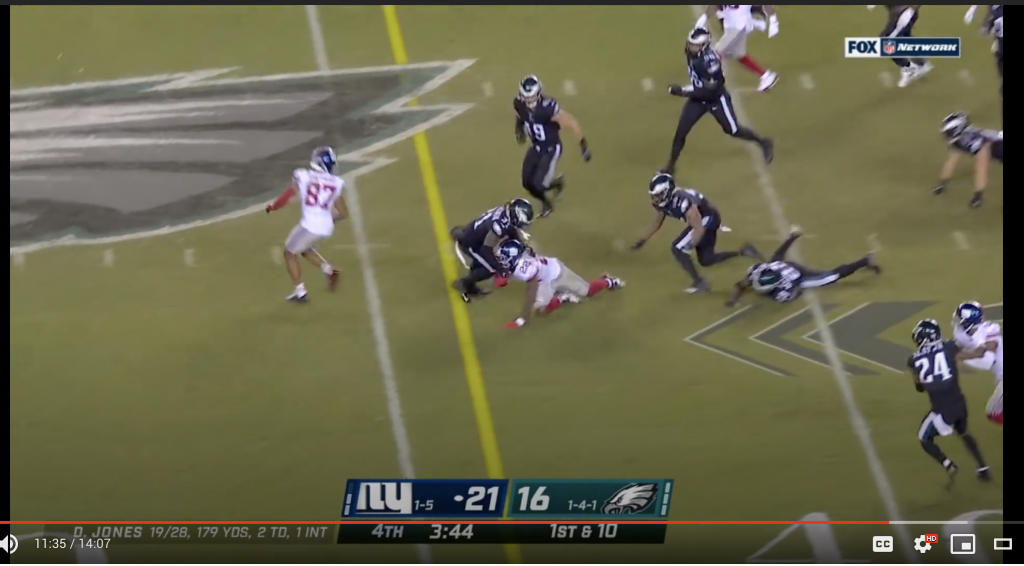 The Giants huddled; the clock was running. Philadelphia had all three of their timeouts remaining, but they would be forced to burn through them in short order if they wanted any chance of getting one more offensive possession.

But something happened next that, I contend, would change the dynamics of the game more than any play that would come after it.

The officials ruled Gallman’s nine-yard run as good for ten. They ruled it a first down.

Now, in practically any other instance in a professional football game, that type of error would benefit the offense — but not this time. The goal of this particular Giants’ drive was not to score points. No, the goal was to run out the clock. Which, mathematically, means converting first downs as inefficiently as possible. And so in this particular instance, the officials’ error benefited the defense.

Remember, there were only 3:30 remaining in the game. The clock was running. Had the officials correctly spotted the ball, the Giants would have had two chances to gain one yard. It’s highly probable that they would have converted the first down. The extra play (or two) would have either burned through the Eagles’ timeouts or drained the clock to the two-minute warning. At worst, Philadelphia would have gotten the ball back with significantly less time. At best, depending on the altered trajectory of the Giants play-calling, New York might have ultimately run the clock out without giving the Eagles another offensive possession.

But as we know, they didn’t — it wasn’t second-and-one. It was first-and-ten. Which meant the Eagles, effectively, lost only forty seconds on the exchange. Which meant the Giants would need to convert (at least) another first down to exhaust the clock fully.

And we all know what happened next.

Now, the rest of what I’m about to suggest to you is purely hypothetical. I don’t blame Giants’ head coach Joe Judge for not being aware that his team didn’t actually convert a first down that they were awarded. But let me ask you this.

Suppose, for a moment, that you’re Joe Judge. And suppose that you did know that your running back only gained nine yards on that first-and-ten run. This isn’t really a stretch – personnel on both sides are constantly looking for erroneous calls to challenge. If that same play happened on third-and-ten, you can bet that Philadelphia’s head coach, Doug Pederson, would have had a challenge flag out before the play clock had time to reset. So it’s not crazy to think that someone up in the Giants’ booth could have noticed.

So let’s pretend they did. Suppose you’re Joe Judge, and your people just informed you it wasn’t a first down. Here’s my question: would you be bold enough … to challenge the play?

Would you be bold enough to challenge a play that takes a first down away from your football team, knowing that your probability of winning the game would increase with a second-and-one?

Remember, our world is fueled by outcome bias. Media and Patriots fans widely criticized future-first-ballot Hall-of-Famer Bill Belichick for electing to go for fourth-and-two against the Colts with his team deep in their own territory in 2009. Mathematically, Belichick was right. But the Patriots didn’t convert. It was a contrarian decision — and contrarian decisions that fail will be lambasted (with sick pleasure) by almost everyone.

The fact of the matter is that coaches and front offices make suboptimal decisions all the time. Baseball brain trusts were slow to adopt defensive shifts. Basketball front offices were slow to adopt the three-point revolution. Football coaches still punt way too frequently. It’s not that they don’t have the data at their disposal. It’s not that they don’t know what the math says.

It’s much simpler than that.

They don’t want to look bad — none of us do, in fact. And we all make way too many decisions based on that simple, fundamental truth.

The Threshold Models of Collective Behavior

In the late 1970s, a sociologist named Mark Granovetter advanced the threshold models of collective behavior, a theory that — to oversimplify it — suggested that in groups, an individual’s behavior depends on the number of people already engaging in that behavior. Granovetter’s paper was cited in season one of Malcolm Gladwell’s podcast, Revisionist History. Gladwell cited the study to explain why Wilt Chamberlain refused to shoot his free throws underhanded, even though his success rate when shooting them underhanded was about ten points greater than when he shot the conventional way.

Gladwell’s argument — inspired by Granovetter’s research — was that, even though we like to think otherwise, most of us aren’t mavericks. Most of us care a great deal about what our friends and colleagues think about us, and we don’t want to make a decision that could leave us vulnerable to criticism, or expose us, or make us look bad. And I strongly agree with Gladwell’s conclusion, which is why I think that there are no more than two coaches in the entire National Football League who would even consider challenging a call against his own team, knowing that in doing so, he leaves himself vulnerable to mockery and ridicule — even though he knows that overturned call would improve his team’s chances of winning.

Now let me bring this argument into the fantasy universe. Those that read me often probably know two things: one, that I emphatically support Zero-RB and Zero-WR lineups because, in an unpredictable game like fantasy football, I contend that your chances of winning improve when you’re really good at a few positions instead of being moderately good at most of them. And the best chance of being really good at one position is to widen your search zone — which means over-indexing, or over-drafting.

And two, that fantasy football players often make suboptimal choices because of herd behavior — because of a fear of looking bad.

These two arguments are related. That’s because I believe fantasy players are often afraid to try “Zero” strategies because they’re afraid of looking bad. When you’re purposively weak in a position, you leave yourself exposed. Your choices in your under-drafted position(s) week to week are often risky, speculative, and imperfect. You’ll also end up having to make more decisions (waiver wire transactions, trades) throughout the season. And that’s all part of the plan — the “Zero” strategies are intended to sacrifice value at some positions for the luxury you’ll have in others. But make no mistake about it: it opens you up for criticism. It opens you up to look bad.

We have six weeks to go in most fantasy regular seasons. If you still have time to convert your lineups — to build unrivaled depth in a critical area at the expense of another, more waiver-wire friendly position — I still passionately support it. Make the decisions that offer you the best opportunity to win your league, without concern or consideration of how those decisions might be judged, criticized, or ridiculed later.

Remember, some of sports’ most successful strategies were deemed absurd when they were first introduced. History tells us that if you wait until the majority of experts tell you it’s time to consider a certain strategy, you’ve already missed out on the opportunity to be a trailblazer.

Don’t miss out. Don’t wait for the consensus.

David Giardino is a featured writer at FantasyPros. For more from David, check out his archive and follow him @davidgiardino.

Players to Be Thankful For in 2020 (Fantasy Football)