Ladies and gentlemen, we’re on the cusp of actual, real-life American football. In just a few short weeks, we’ll be heavily scrutinizing the Hall of Fame, sorting through every play for the next great training camp and preseason star, and reading as much of what we can before that sweet paywall on several sites for “research.” That’s right. We’re almost there.

Since we’re almost there, it’s time to start getting a sense of how your fantasy football draft will go before you draft your squad. The perfect tool is right here at FantasyPros, as the FantasyPros Draft Wizard lets you draft teams repeatedly with so many personalized settings and things to tinker with.

For this mock draft exercise, the settings are:

After randomizing my landing spot, I have the 1.11 pick. Also, the draft board I’ll be referencing for this mock is at the bottom of the article.

Jones had his choice of landing spot this offseason but chose to stay with the Packers on a long-term deal. We know what Jones is, somebody whose efficiency and reliability pushes him into the upper echelon of running backs in fantasy. New for 2021 is the absence of Jamaal Williams from the Green Bay backfield, which could push even more receiving work in Jones’ direction.

In this particular draft, Jones was my highest-ranking running back available, and even as a #ZeroRB truther, I can’t justify a high-end wide receiver in the first round. Two were already selected, which made this pick MUCH easier.

Curiously ahead of Aaron Jones in FantasyPros’ Expert Consensus Rankings in PPR, Chubb is one of the best real-life running backs in the game. Still, his true potential is held back by an annoying thorn named Kareem Hunt for fantasy purposes. He’s Derrick Henry-lite, but imagine if Chubb could even get a small portion of Hunt’s targets? He’d be in the front half of the first round in fantasy without any questions asked.

Now we’re getting froggy. Dobbins has RB1 in his range of outcomes, but he’s not going to do that without the passing work heading his way. We know what Greg Roman means to a running back room; look at Frank Gore‘s receiving totals during Roman’s tenure in San Francisco:

Notice anything different about the receiving stats in those years? pic.twitter.com/HAOyNyLS2k

That said, 3.11 is a good price point to take a shot on Dobbins, as he has volume from the Ravens’ rushing attack headed his way.

After taking three straight running backs to start our draft, we take four pass-catching options with the volume potential we’re looking for. Cooper should be one of the passing game focal points in Dallas. Hockenson could be the only game in town for a hapless Detroit Lions, so he could amass upwards of 140 targets with pure volume.

Sutton’s breakout in 2019 seems like so long ago, but only because he got hurt in Week 2 last season, and now it seems that people forgot about him. Don’t make that same mistake. Teddy Bridgewater made many pieces fantasy relevant last season in Carolina, and he should do the same this season in Denver. Last but not least, Samuel should slot right in as the second target in the Washington offense with Ryan Fitzpatrick at the helm. There’s a bankable 100+ targets here for Samuel with a much higher upside in a more explosive offense.

Right now in Los Angeles, it’s Keenan Allen and… who else? The only proven option among wide receivers for the Chargers is Williams. Add in a young stud quarterback in Justin Herbert, and Williams could finally be unlocked as a fantasy mainstay this season.  He’s a big-bodied receiver who hasn’t lived up to his top-ten draft pedigree fully, so with this offensive ecosystem in place, Williams is a solid bet to return a bit more than his current tenth-round value. If he puts it together? Watch out.

Suppose you believe in Lamar Jackson taking the next step as a passer and just the general talk around the Ravens, who could be passing more in 2021. In that case, Bateman is a player who should be the primary beneficiary of that hype outside of Mark Andrews. So there’s triple-digit target upside here and in the twelfth round? Sign me up.

You’re banking on the extreme upside at this price point in drafts, and Davis has that. Sure, the Bills added Emmanuel Sanders this offseason, but the upside for Davis, who made the most of his 62 targets by catching 35 of them and just shy of 600 yards receiving as the primary deep threat in this offense. If Davis gets more of a well-rounded receiving role in this offense, then Davis should smash his ADP in 2021.

Cook comes off the board as TE25 and is a screaming value now that he has a young quarterback able to get him the ball and an offensive coordinator (Joe Lombardi) who has used him creatively in New Orleans. That combo alone should get you excited for #LateRoundTE here.

More target potential? In this economy? Well, I could have the top-two targets in the vaunted Detroit Lions’ offense here in the earlier pick of Hockenson and the final pick of my mock in Perriman. The wide receiver room in Detroit is barren, so as a dart throw, why not? 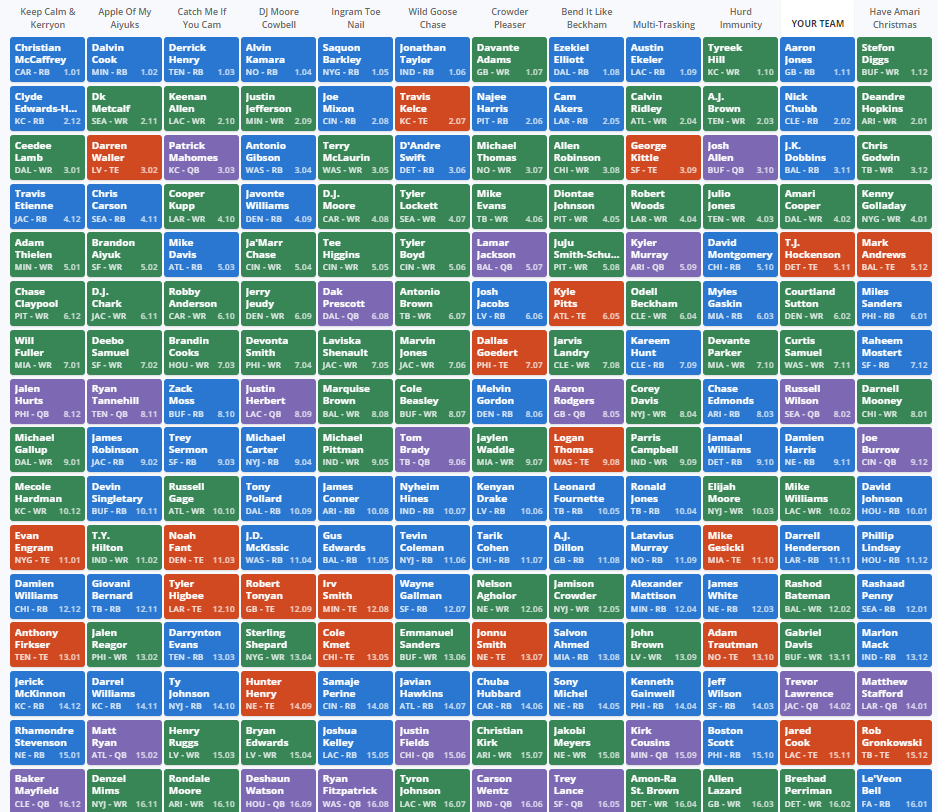