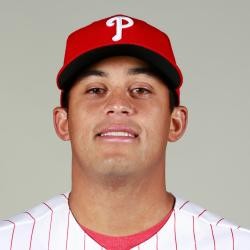 Mario Hollands has been getting hit hard this spring and has an ERA of 11.81 coming into today's game. Hollands felt discomfort pitching in Friday's game and will undergo an MRI today on his left elbow. Hollands was shut down last September with a Grade 2 flexor strain.

The severity of the injury could not only affect Hollands' status, but the status of the entire bullpen. Should Hollands be shut down for extended period of time, it will pave way for another pitcher battling for a spot to make the Opening Day roster. Andy Oliver, Rule 5 Draft pick from the Pirates, is one of those pitchers. He's had an excellent spring and could find his way on the Opening Day roster.

The Philadelphia Phillies blew a 5-run 6th inning lead to the Pittsburgh Pirates to lose the Grapefruit League game, 6-5. Mario Hollands was particularly ineffective, allowing 3 earned runs, 4 hits and a home run in 2/3 of an inning. Hollands, who was expected to be a lefty out of the bullpen when the season starts, now has an ERA of 11.81 this spring.

Hollands was solid during his rookie campaign of 2014. He appeared in 50 games, allowed 45 hits and struck out 35 in 47 innings, and posted an ERA of 4.40. Hollands could end up in Triple-A Lehigh Valley due to his poor spring, so keep an eye on his status before Opening Day.

The Philadelphia Phillies entered the ninth inning on Tuesday with a 5-1 lead over the New York Yankees. Mario Hollands entered and pitcher 2/3 of an inning before being pulled with the game tied. Hollands allowed 4 earned runs on 5 hits, with a game-tying home run with two outs.

Hollands showed some promise out of the bullpen last season as a rookie. In 47 innings, Hollands allowed 45 hits and 21 walks, with 35 strikeouts. Holland had been nursing a sore elbow about a week and a half ago. Even though he struggled in his first game, Hollands appeared to be healthy. Keep an eye on his progress through the spring.