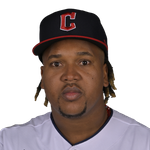 Ramirez's overall 2019 season was obviously subpar, as much as a 23-homer, 24-steal year can be. He batted just .218 in the first half with a mere seven home runs, and his fantasy value was saved only by his 18 first-half steals. But he looked closer to his old self in the second half, batting .327 with an 1.105 OPS. Whether it was him trying to do too much in the first half or something related to his newborn child (his surge happened to coincide with his return from paternity leave), Ramirez's return to normalcy in the second half should give you plenty of confidence in his 2020 outlook.