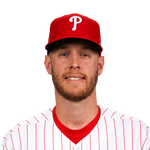 Wheeler's numbers declined from his breakout 2018 season but, overall, there were plenty of gains. He upped his strikeout rate and velocity, cut his walk rate, and set a career high in innings. Now with the Phillies, he'll see a downgrade in park, but because he's been able to avoid home runs over the last two seasons, the move should not have too much of an impact. Wheeler probably won't develop into a fantasy ace, but he's, at worst, a strong third fantasy starter.