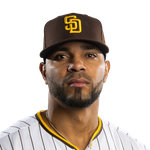 Bogaerts had an outstanding 2019 season, obliterating his career-high in home runs and RBI and getting his batting average back over .300. But the thing is, his underlying metrics don't look all that different from his solid but unspectacular 2018 season. His strikeout rate, hard hit percentage, average exit velocity, and launch angle all remained nearly identical, while his steals (only four) continued to trend down to a now useless level from a fantasy perspective. Bogaerts is still a fine option but at a strong position and now batting in a weaker lineup, be careful not to waste too high a pick on him.