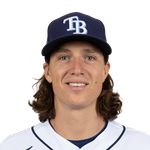 Glasnow was limited to just 60 innings in 2019, but they were pretty glorious ones! His control, which had plagued him since coming to the majors, improved significantly, and his WHIP dropped to an impressive 0.89. He should be fully recovered from his forearm injury heading into the season and has the raw stuff to be a fantasy ace if he can avoid injury. There's risk with Glasnow, but it is worth taking.