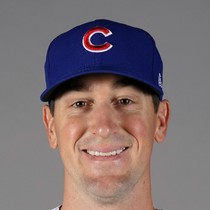 Hendricks can be dominant at times, but his lack of overpowering raw stuff means he has to be pinpoint with his control. When he's on, he can be unhittable, like when he led the league in getting hitters to swing at pitches outside the zone in the second half last year. But in the end, you know what Hendricks is going to give you. A sub-3.50 ERA, a sub-1.20 WHIP, and mediocre strikeout numbers. There's plenty of room for that on a fantasy team. But don't bank on much upside.