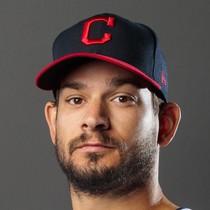 Hand didn't have a bad year by any means, but there were two major areas of decline. The first was a cratering of his ground ball rate, and the second was that batters simply hit his fastball much, much better than in previous years. Hand is a reliever, which means volatility, and his strikeout rate remains well above-average. But with just a club option left on his deal, he could be a candidate to be dealt if the Indians struggle out of the gate.