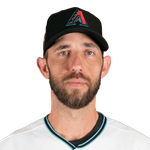 Bumgarner's ERA approached 4.00 last year, but he stayed healthy all year and saw a velocity bump after two injury-plagued years. The move to Arizona is a downgrade considering the park change, but it's not quite as drastic as it would have been without the humidor. Still, Bumgarner's numbers were significantly worse away from Oracle Park last year (2.93 ERA at home, 5.29 away), so it's fair to exercise caution with Bumgarner. But, so long as you recognize him for what he is at this point in his career, he'll likely give you what you expect.