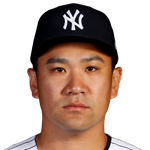 Tanaka had a bizarre year. On the negative side, his ERA soared to 4.45 and his WHIP and strikeout rate went to a career worst 1.24 and 7.37/9, respectively. Yet he slightly lowered his walk rate from the past two years, cut his HR/FB rate, and got batters to swing at pitches outside the zone more than almost any other pitcher in the second half of the season. At this point in his career, given his home park, there's little optimism that Tanaka can ever develop into the ace he appeared to be during his debut. Draft him as a back-end-of-the-rotation starter in deeper leagues but nothing more.